Bela Fleck: A Force of Nature in Five Strings

Earlier this evening, I attended a performance and speaking engagement with renowned banjo virtuoso Bela Fleck at Middle Tennessee State University, just outside of Nashville.  As the evening began, Fleck walked on stage in blue jeans and sneakers, carrying his banjo case.  He sat down in the lone chair on stage, opened the case and began playing unaccompanied after a brief introduction.  As the evening progressed, he casually answered questions from the emcee before playing another tune.  This same format continued, with Fleck answering questions from the audience and then playing again; sometimes bluegrass, sometimes African melodies, at least one Bach piece, and other works that can only be described as “Fleckian.”  Despite being well spoken, generous, and affable, (after the performance, Fleck sat on the edge of the stage signing autographs and speaking with every last person who came over to talk to him) one got the sense that he was much more comfortable playing than talking and preferred to communicate more through his music than verbally.  Almost every question was answered with brief punctuations, demonstrations, and explanations through banjo riffs and snippets of songs.   I know this sounds corny, but it was as if music was so integral to his person that he might seem incomplete without his instrument, his banjo an appendage as necessary as any of his four limbs.  This intensity of purpose and dedication to craft is essential to Fleck’s person, something I feel I misunderstood in his music for a long time. 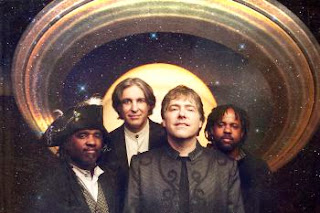 To be honest, Fleck had always been one of those musicians I greatly respected but never fully embraced. The nice way to describe my resistance to his music is that he was just too good. The less charitable way to describe my prior aversion would be to say he’s too technical, too fast, too overwhelming.  In short, his playing was just too much. I also have to admit that his fusion group, The Flecktones

, never did much more for me, either. In part, the early days of their Michael Jackson meets Star Trek meets Pirates of the Caribbean stage and costuming persona was all too indicative of their music: a little too synthesized for my tastes. Having said all that, over the past year or so I’ve been listening more closely to Fleck’s acoustic material and realize that within all those notes and all that technical virtuosity there is a ton of soul. Seeing him speak and play tonight only confirmed the foolishness of my prior mistaken judgement.

I’ve come to realize that Fleck’s virtuosity and technical prowess is simply an organic expression of a raving-mad, benevolent lunatic. It’s who he is.  The guy is a maniac cleverly disguised within a reserved and mild-mannered outward personality. Though Fleck was often self-effacing, humble, and reserved as he spoke, he also dropped hints that reflected an unyielding ambition, drive for perfection, and an insatiable appetite for artistic exploration.  Fleck described how his first instrument as a kid growing up in New York City was guitar where he played folk music without a great deal of interest or dedication.  One day, however, he heard Earl Scrugg’s banjo on television playing “The Ballad of Jed Clampett.”

He said he was genuinely stunned and transfixed by the sound.  Shortly thereafter, he received his first banjo and said that almost out of the blue a Type A personality emerged.  All he wanted to do was practice and play, obsessively and compulsively.

With no arrogance and mentioned almost in passing, Fleck described how within three years he had gone through several teachers, each one sending him to another because he had absorbed everything they could teach him.  Amazingly,  his final teacher at the end of those three short years was renowned banjo virtuoso Tony Trischka

who Bela had come to literally imitate. Fleck said that people could not distinguish between the two of them if they closed their eyes.  To put that in context, there are probably dozens of highly revered professional banjo players who will never approach the technical prowess of Trischka, even after a lifetime of playing.  Fleck reached this elite level within three years and was forced to develop his own style because there was literally nothing left to learn about banjo styles and prior precedent on the instrument.  That’s not to say that he was the “best” player (he still calls Earl Scruggs the best three-finger style player ever), it’s just to say that he absorbed and mastered every major technique of three-finger banjo playing in a very short time.  Such a feat borders on Robert Johnson

mythology, even considering Fleck’s obsessive hours of practicing.  If Johnson went to the crossroads to make a deal with the devil in exchange for his guitar mastery, perhaps Fleck went to an Appalachian mountaintop to acquire his banjo chops.  On second thought, maybe it was a crossroads given Fleck’s unrivaled ability to forge fascinating intersections between musical genres.  The fact that his wildly diverse career has been crafted with an instrument that had often been perceived as a musically limited, provincial folk curiosity makes his accomplishments all the more astonishing.

Fleck has received fourteen Grammys and has been nominated in more categories than any other musician in history.  Allow me to list but a few highlights.  He helped redefine bluegrass with progressive supergroup New Grass Revival

.  He has played and recorded with jazz greats Chick Corea, Branford Marsalis

.  He has played and composed classical works with master bassist and composer Edgar Meyer

.   He has recorded with classical Indian tabla master, Zakir Hussein

.  Along with his wife, Abigail Washburn

, he formed the Sparrow Quartet

, resulting in a sublime album combining elements of bluegrass, old-time, classical, and Chinese folk music.  His recent journey to Africa resulted in three separate Grammy awards and was comprised of experiments and compositions of African music from three different countries (documented in the film, Throw Down Your Heart

Let’s just review this resume – here is a musician who has composed, written, and performed award-winning music at the highest levels within the genres of bluegrass, jazz, classical Western forms, classical Indian forms, multiple traditional African forms, and countless hybrids of all of the above.  I’m not sure another musician on the planet has a resume both as diverse and critically praised.  Again, the man is simply a maniac who devours music and fully indulges his varied obsessions with a drive and compulsion made palpable by the shower of notes, phrases, and tones that seem to flow effortlessly and infinitely from his banjo.  As I said earlier, the intensity of his playing is almost too much until one settles into his musical universe, which is a genuine and passionate expression of an obsessive artist.  Foolishly, my cursory and superficial early listens had often led to the false, reductive conclusion that Fleck’s dense playing was a sterile display of dispassionate technique.  I could not have been more wrong and obviously never took the time to truly listen.  Bela Fleck’s virtuosity is more primal than pedantic.  His playing is as naturally and beautifully complex as a rushing river’s varied currents flowing infinitely and wildly in and around earth and stones to create a unified whole.  I get it now.

In the past, it’s as if I was focusing on a single current at time.  A jaw-dropping, rapid fire banjo lick was like one current wildly splashing and foaming around a single rock.  Another explosion of notes was similar to a gush of water rushing headlong into the river bank before splashing back into the greater stream.  I didn’t bother to widen the lens and take in the river as a whole.  I was too busy listening to Fleck’s banjo rather than Fleck’s music.  I never grasped how the intensity of all those currents, all those notes and phrases, work together to form a cohesive, organic phenomenon that is paradoxically serene in its driving insistence.  I hadn’t noticed how the whole of the river, the whole of Fleck’s compositions, integrate into the larger landscape of their surroundings, making everything around them more majestic and distinct, be it a mandolin, a tabla, a violin, or a double bass.  Now I’m listening to the music rather than the banjo and discovering Fleck’s larger landscapes anew.  Maybe one day I’ll even understand those Star Trek-like costumes, but for now I’m content hanging by the earthbound river bed before trying to venture into the sonic stretches of outer space.

THROUGH THE LENS: Los Lobos and Béla Fleck’s My Bluegrass Heart