Behind the Making of: The Far West “Bitter, Drunk & Cold”

The Far West go vintage for their new video, “Bitter, Drunk & Cold.” Find out how they drew inspiration from George Jones and brought back Nudie suits to LA with this TJ exclusive, behind the scenes look at the making of “Bitter Drunk & Cold.”

Q & A with Lee Briante and Robert Black

LB: I wrote this during a period of sleepless nights, before the band was together. I’d been in LA for about a year and was dealing with the lonely reality of my life at the time. the feelings of moving to LA, just torpedoing a relationship, being alone and not knowing anyone. I felt like blaming the city for all that. It can be a tough place to be on your own. The lyrics are pretty clear on those feelings. 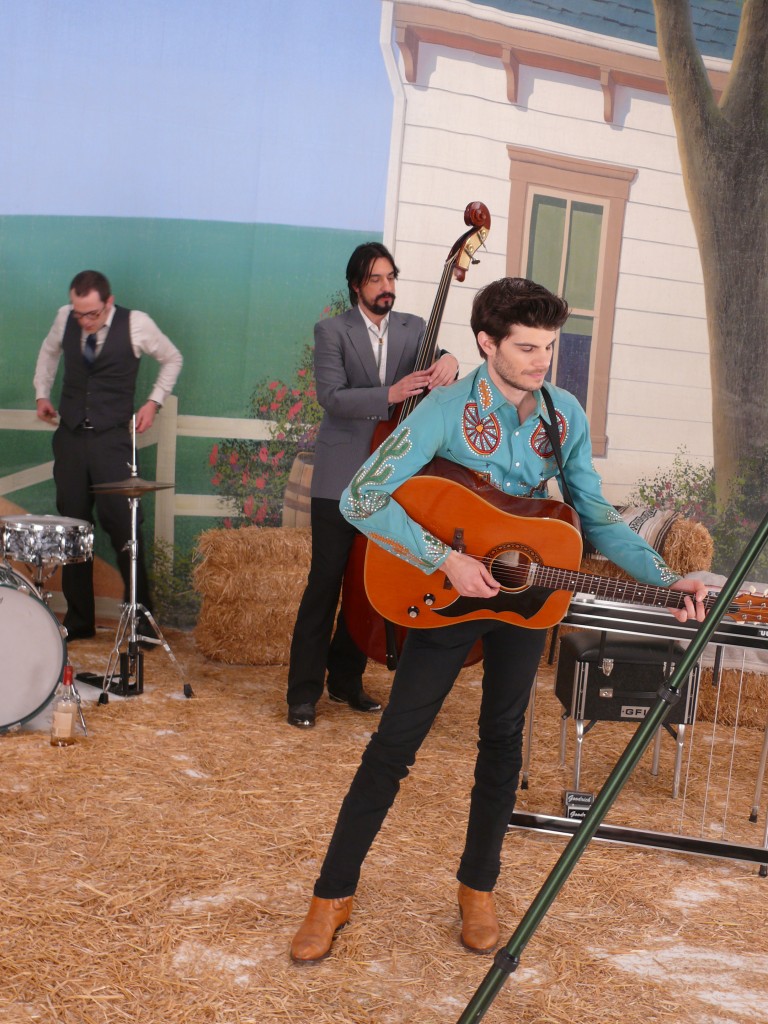 RB: We were inspired by Television shows from the 1950’s and 60’s that featured Country and roots music. Faron Young had a show, so did Webb Pierce and Porter Wagoner. Johnny Cash had one too. We were particularly inspired by one of George Jones doing “White Lightning” in the early 60’s. There is something very interesting about television at that time. It wasn’t a brand new medium anymore but when it comes to filming artists, it seems, everyone was still finding their feet and that results in an approach that seems quaint now or even awkward at times. The band aren’t plugged in, there are no amps on the set and you see things like shots that are impossibly long by today’s standards or angles that may not really be the best way to present a band. We wanted something that felt just like that. We’ve seen other videos that reference the same kinds of shows but, always in a jokey or irreverent manner. This was more of a direct homage, with all due respect paid and also, with all of the quirks of an early television show.

Vintage Clothing:
RB: All of the video clips that we watched for inspiration featured the artists and the bands all dressed up in their best and, with guys like George Jones and Porter Wagoner, they were always in suits made by Nudie Cohn and his company, Nudie’s Rodeo Tailors, which was right here in Los Angeles. Over in North Hollyw 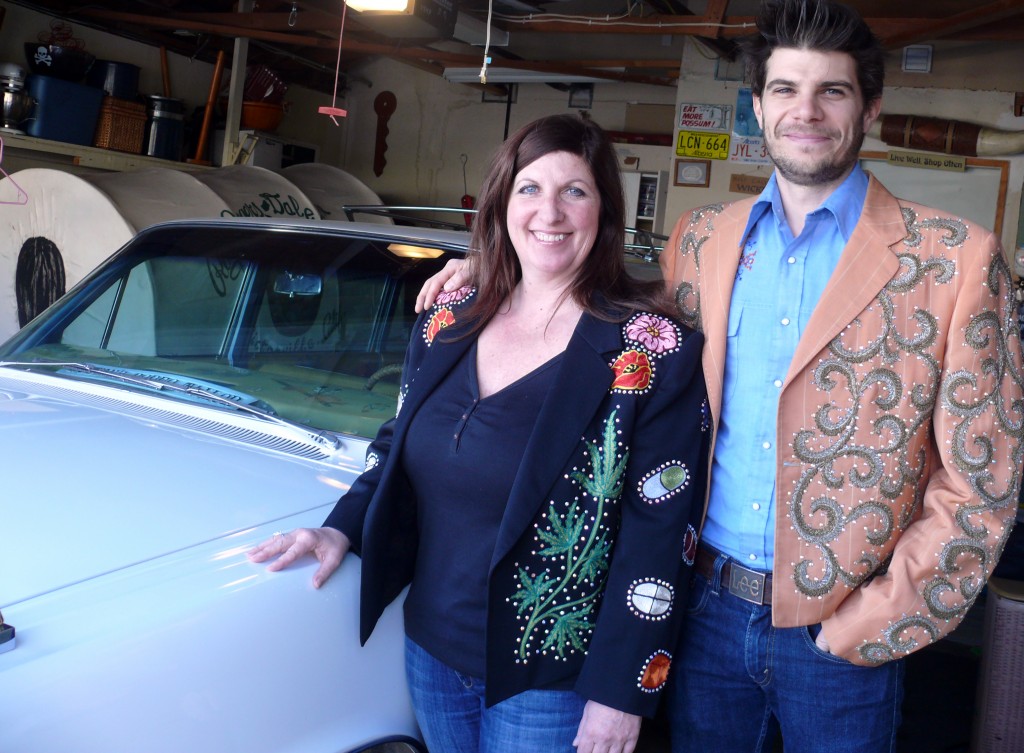 ood in fact. His grand daughter Jamie still lives here in Southern California and we went over to her house for inspiration and to get her help styling our video. We looked at and tried on lots of old, original pieces made by Nudie and many, many old pictures of different outfits. We got a look at a lot of cool old stuff like the rivet machine that was down at the store and had been used to affix every single rhinestones to all of those old suits. We saw the original cash register from the store which was till rung up with the last sale and we even got a look at a Nudie Mobile, one of the cars Nudie custom-made which was all decked out with Western styling, Chimayo weavings, Derringer door handles and so on. It was a pretty great day for us. The shirt Lee is wearing is an original from Nudie and, we’re guessing, was made in the late 1960’s because it had a little pot leaf embroidered on the back (You can just catch a glimpse of the pot leaf in the first shot of the band). Brian is also wearing a vintage Nudie shirt also, very likely, from the 1960’s. 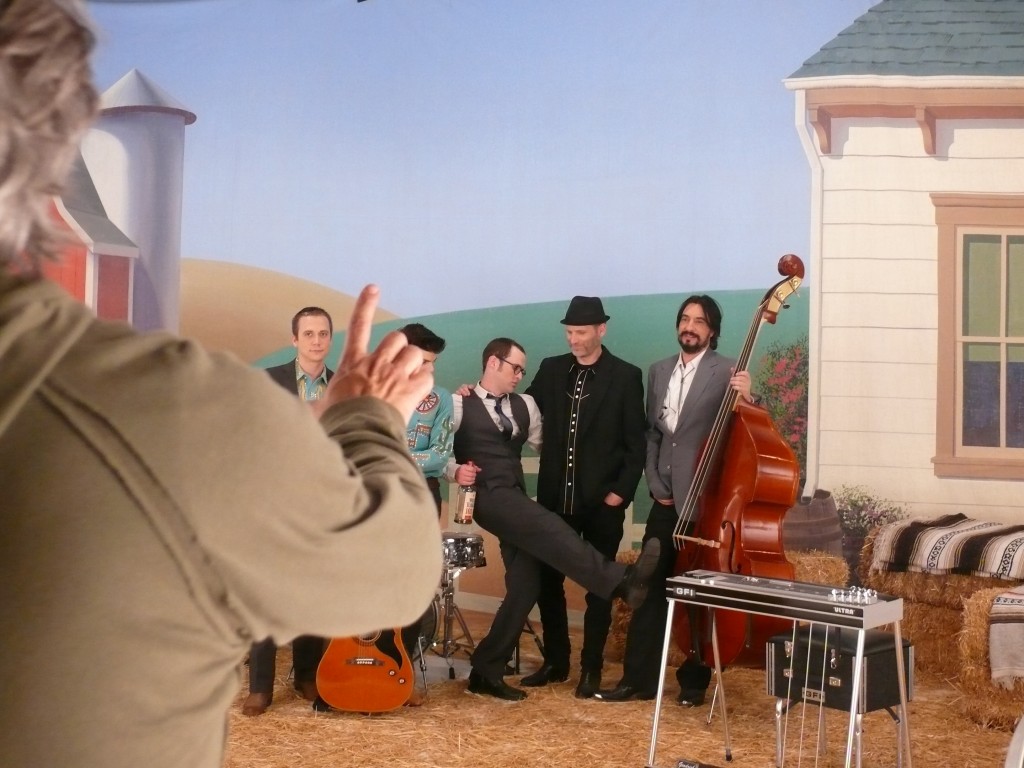 LB:It is a pretty awkward process, pretending to sing your own song. But in the end, thanks to Bobby’s laid back and professional style, the whole thing was very low stress and made it easier for us to work in the unfamiliar music video setting. He cultivated a set that any musician would have felt at home at. For me, the folks that donated their time and energy really meant a lot to me. It’s a group effort, and while our shooting day wasn’t too difficult, I enjoyed the team effort of everyone pulling together for a common goal. We were able to make it feel more like we were hanging out for the day, and on the side needed to get some footage of us playing.

For more information on The Far West, check out our Sin City Spotlight.