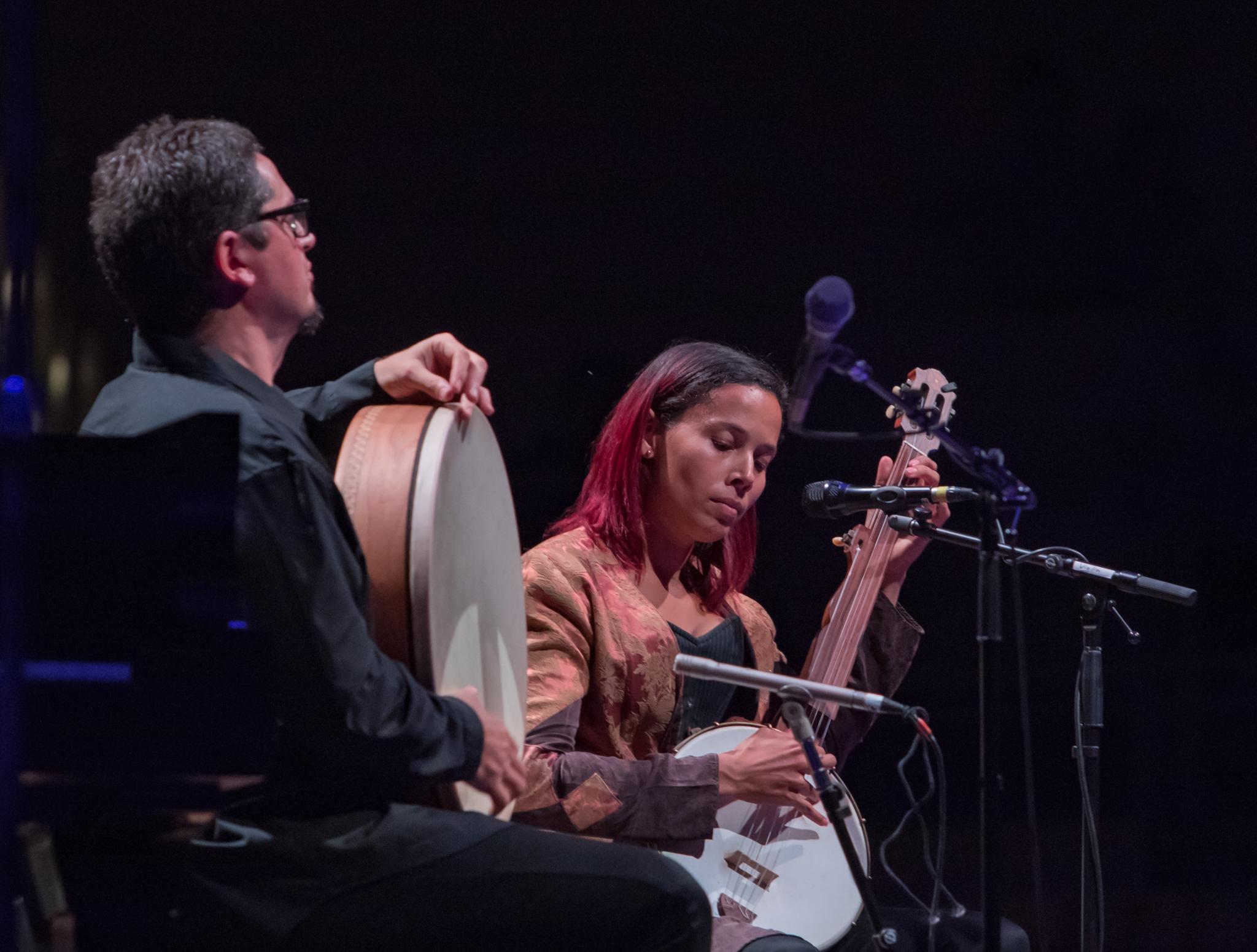 Every artistic form has the potential, on its own, to be both transformative and transcendent. So what happens when an alchemist pours three forms together? A piece of work that is so deeply profound, unyielding, and exalted that words inevitably fail to convey its power. Meet the Nashville Ballet’s Lucy Negro Redux. 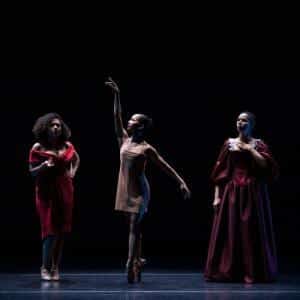 The ballet’s artistic director, Paul Vasterling, envisioned the project after a board member gave him a copy of Lucy Negro, Redux, a book of poems written by Caroline Randall Williams that focused on the “Dark Lady” in Shakespeare’s sonnets 127-154. Vasterling tore through the collection in a single weekend. Inspired by the idea of otherness that echoes throughout the poems and known for his innovative collaborations, Vasterling met with Randall Williams in the fall of 2016 to discuss the project. Within a few months, they had recruited folk phenom Rhiannon Giddens to be Lucy‘s musical voice and company ballerina Kayla Rowser to be her physical embodiment.

While multimodal couplings like this have been known to occur in modern dance, they are rare in the ballet world, especially when ballet is defined in a stringent, classical sense. “A collaboration with a poet or a popular musician is certainly somewhat unusual,” Vasterling concedes, “but I actually think what’s most unique about this work is the subject matter. One of the reasons I was so passionate about doing this project is that the stories being told are so relevant to what we as a society are thinking about now — race, sexuality, otherness.”

Because the piece is centered in the story of a black woman as told by three black women, Vasterling was initially concerned about whether he was the guy who should helm it. Randall Williams laid his concerns to rest when she pointed out that, in her estimation, Shakespeare’s “Fair Youth” was his young male lover, so there was plenty of other otherness represented, as well.

With performances March 20-21 in Knoxville, Tennessee, as part of the Big Ears Festival (tickets and info), and elsewhere still to be announced, Lucy Negro Redux premiered last month in Nashville to a sold-out run and much critical praise. Rightfully so, as these renegades have forged one of the most remarkable artistic achievements to ever emerge from Nashville.

Lucy Negro Redux is so much more than a ballet. It’s a story of love and lust, sexuality and self-determination, history and humanity, art and agency.

It all started with Randall Williams’ early love for William Shakespeare. “In the broadest, most abstract sense, I turned my pen toward Lucy, toward the Dark Lady, because I needed her,” Randall Williams says. “I write in the opening poem, ‘The idea of her / warm brown / body long stretching / under his hands / is a righteous want / she’s become an Other / way to talk about skin.’ I think that’s the heart of it.

“The notion that I could revisit Shakespeare and find myself there, find some way to look at my Southern black woman’s body as precious and with words by the man whose words I’ve loved as long as I can remember, that’s a crazy gift.”

On stage, Randall Williams, Rowser, and Giddens are separate, but united — three black women in three red dresses using three different languages to speak with one voice for one character. Here, past and present are threaded together in every possible way, with Rowser bringing her immense dignity and resilience, Randall Williams adding a natural sass and strength, and Giddens lending her mercurial gravitas and buoyancy.

Framed by Randall Williams’ journey of discovery as much as anything, the Dark Lady’s story unfolds across various ages, tying then to now and back again. Through research, Randall Williams determined Lucy Negro to be a brothel owner, bringing the forces of commerce and consent to bear in Elizabethan England.

“The Dark Lady’s story is one of claiming power — power in a world not set up for women or colored people — and she managed it well. She had Shakespeare’s head spun,” Randall Williams offers. “When you come, like I do, from a fraught history, where light skin means plantation rape, where your body’s beauty can be some kind of curse, to imagine her seizing her agency, being her own witness, and in doing so inspiring Shakespeare to write, ‘Then will I swear that beauty herself is black / And all they foul that thy complexion lack,’ well, that all becomes the biggest gift.”

A student of all things history, Giddens, too, saw herself in the shadow cast from Lucy’s towering figure. Though she’d not previously seen a ballet, the conservatory-trained folk musician is probably the only artist alive who could’ve completed the Lucy trinity. To do so, she armed herself with instruments of the age — including banjo, frame drum, piano, and vocals — and the perfect musical partner in Francesco Turrisi, an early music expert who has actually performed at the historic Globe Theatre.

“I feel like it’s the perfect storm. It’s Shakespeare. It’s got black women, it’s got banjos, it’s got ballerinas,” Giddens says, adding with a laugh, “I mean, what else do you want?!”

“I started out as a folk dancer — contra dance, square dance — then started playing music for contras and squares. The idea that you play music and they dance to it … it’s still the same, though different dances need different things. This is different in that Paul is like, ‘I need seven minutes of … something,’” Giddens explains with a laugh. 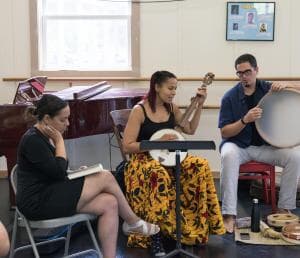 To fill the many minutes, Giddens composed some new music and reworked some old tunes. Pulling from Freedom Highway, “At the Purchaser’s Option” shows up in a seven-beat time signature on piano, while “The Love We Almost Had” builds from a jazz scat into “operatic madness.” Other musical themes, Giddens says, just sort of “fell out” of the viola and circa-1923 cello banjo she was composing on.

“We were finding musical connections and they were just natural in the ballet — like frame drum and minstrel banjo sound amazing together. All of these connections created the musical fabric of what Lucy is,” Giddens explains. “The sound is unique because what we’re doing is unique. We’re putting these things together, but if you go back, you realize that some of these forms come out of Renaissance music that are, already, European and African.

“It’s all about the edge, where cultures meet and agitate and create new forms. This was already happening in Europe before what started happening in the United States. You had the trans-Saharan slave trade way before you had the trans-Atlantic slave trade. It was all setting the stage for what came after on the Atlantic side. It’s a really amazing opportunity to get to do all that in a way that nobody sitting out there in the audience is going to be thinking about. They’re just going to hear these sounds, and it’s going to fit. It fits what’s going on onstage and in Caroline’s poetry and in the narrative that Paul has put together through the dancers.”

Indeed, all of those musical elements, in turn, are reflected in the choreography, with hip swinging and floor slapping that evoke Scott Joplin’s “Ragtime Dance” sidling up alongside classical and pointe work that recall masked Elizabethan balls. And, because it’s a singular study, the themes that arise in the movement and the music necessarily correspond with the spoken words, as well, with Randall Williams and Giddens even tag-teaming certain key lines. Lucy Negro Redux‘s myriad artistic cross-pollinations allow various cultures to intersect within it to possibly, hopefully expand everyone’s outlook.

“I think it really is a great opportunity to see that, yeah, you can have somebody playing the banjo, and there’s a ballerina there on pointe, and it all works,” Giddens says. “The array of musical instruments that Francesco and I have, none of them, except for the piano and the viola, are instruments you would expect to see with a ballet. Just from that point of view, it’s an expansion of what people assume about ‘high art’ and whether it can partner with vernacular art, or whatever you want to call what I do. Then you have the story, which is so interesting, and you have Caroline’s poetry. Each thing, in itself, intersects a lot of worlds. Then you have all those intersections thrown together in an intersection, and it all boils down to that it’s a really, really interesting story and we’re all just trying to tell it.”

For Giddens, Vasterling, Rowser, and Randall Williams to tell this story of a cross-ages tug-of-war love triangle encased within race and gender taboos with a black woman at the core of it, they all had to set their egos aside and put Lucy first. Giddens, for one, took the perspective that “the person who should win is Lucy, not any of us.”

The other collaborators concur. “It’s been extraordinary,” Randall Williams says. “The real magic is in the fact that Paul and Rhiannon and I just have a real symbiosis, a true meeting of the minds. It can be a very vulnerable thing, handing over your art to another artist and saying, ‘Go for it. Interpret it how you will.’ But in this situation, there is an incredible amount of trust, and it is earned and reinforced daily. Rhiannon was the first woman I thought of when I sat down with Paul and he said, ‘If you could have your dream recording artist, who would it be?’ Can you imagine? This has been such a miraculous process of speaking big hopes into the world and watching them just get willed into existence.”

Though it began with words, words truly do fail to capture the importance of Lucy Negro Redux’s existence and experience. It is a work of art that fully transcends its form and transforms its audience.