Back in Tune With June

Two sets of hard facts have converged in 2005 — with some sweet, surprising results worthy of a country song.

First, it was a little over two years ago that June Carter Cash passed away so unexpectedly. Second, it’s been ten years since the last full album from her talented and unpredictable daughter Carlene Carter — five years since Carlene has had scheduled appearances onstage, her one-time edge-of-country stardom seemingly washed away in a mess of tabloid headlines and bad times.

Two years on, it’s time to begin revisiting June Carter’s contributions. Hollywood’s Walk The Line movie, slated for this fall, will bring a youthful version of the June people know a little about — the tolerant but tough companion, helpmate and occasional co-performer “behind” the Man in Black. The new career retrospective Keep On The Sunny Side rounds out the picture some with two discs of recordings of June Carter, the singer and songwriter, across the decades.

But neither of those can recapture the sheer force of June as a live solo act in her prime, as a laugh-till-ya-cry comedienne with perfect timing for stand-up bits and comic songs alike, with the moves of an agile dancer, at once hard hillbilly and slyly sophisticated. Neither can show her as the firecracker all set up to be set off in the under-anthologized Carter Sisters and Mother Maybelle act of the 1950s.

Thus the value of Wildwood Flowers: The June Carter Story, a theater production that completed a July run at Nashville’s Bell South Acuff Theater (with other runs elsewhere likely to come). It traces and recreates June’s live work from her childhood days with the Original Carter Family on Texas border radio through the early 1960s, as she was composing the song first known as “Love’s Ring Of Fire”.

The musical, written and shaped by producer Angela Bennett and director Bobby Bodford, focuses especially on the Carter Sisters act, and June’s relation with Maybelle in those years. It retrieves dozens of numbers she’d performed in the day — Carter Family stuff like “Keep On The Sunny Side” and “Church In The Wildwood”, sure, but also Lead Belly’s “Cottonfields”, the satirical “Money” from radio hipster Stan Freberg, and “No Swallerin’ Place” (about songs no good for singers) which June co-wrote with Broadway’s Frank Loesser, of Guys & Dolls fame.

Bits of back home, backstage, and road life with Mother Maybelle and sisters Anita and Helen are the stuff of this often sentimental review, but the thing that has grabbed notice, and which brought startling, gulp-inducing poignancy to the production’s run, was the casting: Carlene Carter was persuaded to return to the stage — and Nashville, after time away in rehab — to play June.

“Play” is not quite the right word. Onstage, Carlene kicked into a dance like her mother, carried her body like her, very much seemed to become her — all the more startling because in daily life, Carlene facially favors her father, Country Hall of Famer Carl Smith.

Carlene and close cousin Lorrie Davis Bennett (who played her mother, Anita Carter, in the show) were consulted about music and their lives on the roads as kids traveling with the Carter Sisters act. Carlene’s one-off duet with Brooks & Dunn’s Ronnie Dunn on “Jackson” at a Johnny Cash memorial concert in November 2003 started the producers thinking about her for the role.

Carlene was initially intimidated by returning to performing, and to Nashville, before she agreed last spring. “My biggest fear,” she admitted in a post-show interview, “wasn’t that I was going to mess up, or even that I’d go back out and start drinking or something. I was more afraid of the feelings that this would bring up. We started the rehearsal on my mother’s birthday; we opened up on July 13th, which was my sister Rosie Nix’s birthday. These were like little God shots telling me that it was all OK.”

“It’s been amazing, how far I’ve come and how different my life is now,” she says. “I really feel like my music, which I’ve been working on again, has been rekindled by this; I’d really lost my spark for it. What I’m writing now very much is Carter Family music — though whether it will sound traditional I don’t know. The stream of content is the same; it’s about life, hard times, good time, faith; its about love. All of those things.”

For the Nashville run, an after-show coda was added: Carlene sang her own tribute to Mother Maybelle and the Carter Sisters, her 1990 song “Me And The Wildwood Rose”. Then they finished with “Will The Circle Be Unbroken”, Carlene still in costume as her mother, still moving so much like June, as she’s found she often does offstage.

Carlene and June were singing. 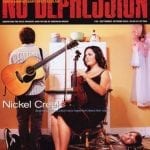