Turnstyled Junkpiled’s Tales From The Legendary Founder of The Groundlings

While driving from Twin Peaks to my gig in North Beach, a song blasted from my car radio. And the blast was a tender ballad.

I had never heard of Sammi Smith. She was singing “Help Me Make It Through The Night.”

The DJ said the song was written by Kris Kristofferson. I had never heard of him.

The year was 1970. I was a performing member of San Francisco’s “The Committee,” the best improvisational theatre company in America.

I bought Kristofferson’s albums. I listened. I sang. I memorized. I decided to write songs. And so, I did.

When I was a kid I wanted to be Roy Rogers and Gene Autry. I dreamed of strumming my guitar and singing cowboy songs on horseback.

I grew up in Corpus Christi, Texas, not far from Brownsville, where Kris was born. There was a Gulf Coast thing about the music and the man that seemed so familiar. 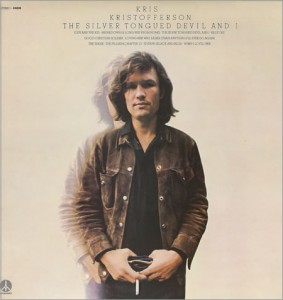 I saw Kristofferson perform at a small club in San Anselmo in Marin County, right after I had discovered his music. My friend, Roy Loni, commented during the show, “Boy, you can sure see him comin’.”

I guess nowadays he might have said something about the Kristofferson “brand.” Hell, I knew what he meant. Each song had a signature that couldn’t be forged.

The lyrics. Oh Lord, the lyrics.

Kris was a Rhodes scholar in English Literature at Oxford and he was offered a job teaching English Lit at West Point. He is a master of language. And like what actors do when they improvise, Kristofferson is an artist who has the rare ability to write nonsense that somehow always manages to make perfect sense.

“Billy Dee was seventeen when he turned twenty-one.” – “Billy Dee” from The Silver Tongued Devil and I

And the melodies. So simple. So full of mood and feel and so right for the story.

Hell, I can play those chords.

When my improvisational theatre company The Groundlings was about to open in 1974, Sylvie Drake of the Los Angeles Times wrote a feature about me in the Sunday Calendar section.

She asked me to enumerate the things I wanted to accomplish in my life. I told her that someday I would record an album of Kris Kristofferson songs.

About the author: A native of the Haliburton oil camps in Oklahoma, Texas and California, Gary Austin is the founder and original director of LA’s legendary Groundling Theatre. He is currently creative director for all courses and shows at Gary Austin Workshops. An acclaimed singer/songwriter, Gary’s contributions to the world of Country music include songs in film and television, as well as opening for Charlie Daniels, Sweethearts of the Rodeo and The Marshall Tucker Band, among others. His music can be heard at http://www.myspace.com/thegaryaustin