Tucked in an artsy, bohemian area of West Asheville is a former movie theater turned restaurant, bar and music hall … and it’s quickly developed a reputation as a “go to” venue for great music. The Isis Restaurant & Music Hall offers a blend of comfort and sophistication — and impeccable sound.

Kim Ruehl, editor of No Depression, lives in Asheville and is a frequent and loyal customer. “I’ve been so thrilled to have a music venue like Isis open up in my neighborhood, in West Asheville,” Ruehl says. “I’ve seen a diverse list of artists perform there, from Amy Ray to Krishna Das, Samantha Crain to Town Mountain, and every show has been special. Isis has earned its way to being one of those venues where you can land any night of the week and know whatever’s happening on stage will be good. And, maybe even more importantly, the jazz and bluegrass jams there have nourished impressively talented communities of players.”

The Isis is a concert venue with an accompanying bar and restaurant.  Many of the artists and performers featured are recognized national acts, but new artists are also presented from the region, which is known for its indigenous roots music. The Honeycutters, Red June and Aaron Burdett are all North Carolinians who’ve shared their talents from the stage of The Isis. It is a great music venue that nationally touring acts enjoy playing, and it is also a venue that remains committed to supporting local and regional artists.

“You can expect bookings for a wide range of music genres,” says Scott Woody, proprietor. “We put on different types of shows from seated dinner cabaret style shows with a capacity of 170 people to standing room shows with the capacity of 450 people. The hall features a balcony and upstairs lounge and bar. We try to keep it diverse.”

The Woodys purchased the building in 1998 while Scott was still a practicing veterinarian in Atlanta, where he was also involved in the local music scene. Scott has been active in music for more than 30 years; playing in bands, booking jams and more. He was “smitten” by the banjo in college, and also plays guitar.

The Woody’s began visiting the Asheville area as they considered places to retire.  Scott became enamored with the beautiful 1920’s buildings in West Asheville and eventually decided to invest. At the time, The Isis was a restaurant called Possibilities. The old theater shape, however, seemed ideal for music in its similarity to some of the great music halls of the world. Woody restored the name of the original theater, taken from Greek mythology.

The renovation, and now the operation of the restaurant and music venue, is a family affair for Scott, his wife, Lilliana, and three children.

Downstairs is the main stage, bar, and dining area with wooden tables exquisitely crafted from the salvaged former flooring. An outdoor patio offers additional seating in warm weather. The second bar upstairs offers casual seating, a baby grand piano, and a smaller stage ideal for performances by a singer/songwriter or trio. The second level balcony provides a view of the main stage.

“We lean toward acoustic Americana.” Scott says. “I do most of the booking and that’s what I am most familiar with.” The Isis is a good home for roots music, bluegrass, and singer/songwriter performances. “You can hear every note in a nice setting,” Scott adds.

“It has been, and continues to be, an interesting and memorable experience,” Woody says. “Throughout this process, folks have asked us to describe what exactly Isis is. We each answer this a little differently, but in the end we expect the food and music to be a reflection of that which we, our friends, and family enjoy. All the while, our ultimate goal being to create a good place to eat that inspires conversation, camaraderie, energy, and has great food and seriously good music.”

Ruehl, with her discerning taste, clearly loves the place, and chides its owner ever so slightly when she says, “Even though he’s a banjo picker, Scott has impeccable taste across so many genres of music! He has prioritized giving audiences not only an entertaining show but also an exquisite listening room-like experience. The sound is especially fine-tuned for acoustic instruments (which is sadly rare), and that goes as much for small shows in the Lounge as it does for the larger sets in the Music Hall.” 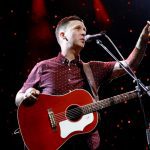