How do you know if a Jazz Fest artist really loves New Orleans? Don’t worry, they’ll tell you.

Steve Earle, in a midday performance with his band the Dukes, called the city “a national treasure.” Emily Saliers of The Indigo Girls gave the crowd a running tally of snacks she had consumed thus far (“two muffalettas, crawfish bread, and beignets”). And Chris Stapleton, recalling from the stage a previous Jazz Fest gig where he saw Jerry Lee Lewis perform, proclaimed “This is one of the best fests for great music you’re ever going to find.”

It’s hard to argue with that last point, as the 2019 New Orleans Jazz & Heritage Festival featured hundreds of acts on a dozen stages, ranging from homegrown jazz and gospel traditions to Afro-Caribbean rhythms and everything in between. (Everything, that is, except for a few unexpected cancellations, most notably the Rolling Stones, but also their replacement, Fleetwood Mac, and — a heartbreaker for American folk fans — an ailing John Prine).

With a commitment to highlighting music of historic and contemporary significance, it’s no surprise that American roots music gets its due at the fest, and this year was no exception.

Earle, on the heels of his recently released tribute album Guy, devoted much of his set to Guy Clark, opening with a trio of Clark’s songs: “Dublin Blues,” “Texas 1947” and “Rita Ballou.” He described the pair’s relationship as a “real-life, old-world apprenticeship,” and longtime fans likely recognized in Earle’s performance a softer, warm-hearted approach, at least slightly, as he reminisced sweetly about his mentor. The rough edges are still there, of course, proven through a run of Earle’s originals, including “Feel Alright,” “Guitar Town,” and “Copperhead Road.” Near the end of his set, Earle paid tribute to New Orleans with the Katrina-inspired love letter “This Town” (featured in the HBO drama Treme, in which Earle played a supporting role) before cranking it up for the closing number, “The Revolution Starts Now.”

Festival organizers might have underestimated the enduring popularity of The Indigo Girls, scheduling the band on the small Fais Do-Do Stage, which is normally reserved for traditional Cajun acts. The crowd for the duo’s late afternoon show spilled over into the Folklife Village — past the Houma Nation’s fry bread stand and all the way to the blacksmith demo tent — clogging up the dusty walking paths where fans gathered shoulder to shoulder. The acoustic set by Amy Ray and Emily Saliers, accompanied by violinist Lyris Hung, included new songs (“Country Radio”) and classic crowd-pleasers (“Chickenman” and “Land of Canaan”). A more intimate appearance occurred earlier in the day on the Allison Miner Music Heritage Stage, where the pair were interviewed by local music writer Alison Fensterstock. As a bonus, they treated the small crowd to renditions of “Elizabeth,” written by Saliers about her years as an undergraduate in New Orleans (“I started going out, then I had to go home,” quipped Saliers), and Ray’s “The Rise of the Black Messiah,” inspired by a letter she received from the late Herman Wallace, prison reform activist and inmate at the notorious Louisiana State Penitentiary in Angola.

The first weekend of the fest also featured third-generation Mississippi bluesman Cedric Burnside, who got his start playing drums with his “Big Daddy,” the late, great R.L. Burnside. With the release of last year’s Benton County Relic, Burnside has proven himself on guitar as well. He kicked off his energetic morning set at the Blues Tent as a solo acoustic act, growling through originals (“Love Her ’Til I Die”) and Hill Country staples (“Come On In”). Burnside punctuated his set with R.L’s familiar exclamation of “Well, well, well!” and even delivered one of his grandad’s jokes (I won’t give away the punchline, but it includes the refrain “She’s your sister, but your mama don’t know!”). For the second half of the show, Burnside switched to electric guitar and was joined by collaborator Brian Jay on drums, who provided big, pounding beats to accompany Burnside’s droning, hypnotic guitar work, reveling in the signature sound of the North Mississippi Hill Country for tunes like “I’m Hurtin’.” The pair swapped places for the set’s last two numbers, as Jay plugged in a vintage Goldtop Les Paul and Burnside settled in behind the kit, closing the show with a down and dirty, stand-up-and-clap-your-hands rendition of Junior Kimbrough’s “All Night Long” 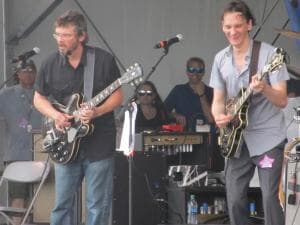 The festival’s second weekend included more revved-up Hill Country blues from the North Mississippi Allstars, who opened their set with the help of the Rising Star Drum and Fife Band, founded by late bluesman Otha Turner and now led by his granddaughter Shardé Thomas. Once again, the legacy of R.L. Burnside was prominent, as the band, led by brothers Luther and Cody Dickinson, tore through familiar tunes like “Poor Black Mattie,” “Skinny Woman,” and the closing one-two punch of “Let My Baby Ride” and “Shake ’Em on Down.” Other highlights included a guest appearance by New Orleans guitarist Anders Osborne for “Back Together,” a far-out electric washboard solo by Cody, and a performance of “Rollin’ and Tumblin’” that featured Luther soloing on a two-string coffee can guitar.

While some of the fest’s big-name headliners go out of their way to deliver a singular, only-in-New-Orleans experience (like pop princess Katy Perry, whose performance included the Soul Rebel Brass Band sitting in on “Chained to the Rhythm” and “Dark Horse,” the Gospel Soul Children choir on “Firework,” and a shout-out to fried okra), country superstar Chris Stapleton played it by the numbers when he closed down the Acura Stage, the fest’s biggest venue, on the second Friday. The band opened with the hard-driving “Midnight Train to Memphis,” and fans sang and swayed to loveworn hits like “Millionaire” and “Broken Halos,” broken up with a rowdy singalong version of “Might as Well Get Stoned” in between. The set ended with Stapleton’s cover of “Tennessee Whiskey,” as the crowd — beer-buzzed and pink from the sunshine — slow danced away the evening’s final moments. 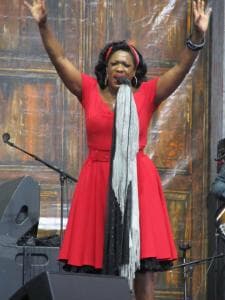 Tanya Trotter of The War and Treaty. (Photo by Brad Rhines)

The fest’s second Saturday got off to a late start thanks to early morning thunderstorms, and the muddy festival grounds — which serve as a horse racing track the other 50 weekends of the year — were funky in more than ways the one. Still, the Blues Tent was packed for an afternoon performance by The War and Treaty, who proceeded to bring down the house with their soulful, gospel-inspired brand of rhythm and blues. Unlike the more stripped-down arrangements on their records, husband and wife Michael and Tanya Trotter played the fest backed by a punched-up, hard-driving full band, complete with blazing guitar solos and a horn section. After opening with the foot-stomper “Hi Ho,” the pair found their way to the slow-burning love song “Til the Morning,” which boiled over with power and emotion, literally stopping the show for a minutes-long, teary-eyed standing ovation — and that was only halfway through their set. The band vamped it up on “Set My Soul on Fire” as Michael segued into a bit of Louis Armstrong-inspired scatting and a throaty, bluesy rendition of “When the Saints Go Marching In,” eventually closing with the rousing “Down by the River.”

The Trotters basked in the crowd’s final standing ovation with a sense of humble wonderment, moved by the enthusiastic reaction and radiating a deep love and appreciation for the fans, the moment, and most of all, each other.

“We’ve been waiting the whole year for this,” said Michael, about the band’s Jazz Fest gig.

Fans of the fest know that feeling well, as the wait for next year has already begun.