It was a packed house at the Black Box. Anais Mitchell, supported by Rachel Ries, had come to town and tickets were scarce.

Rachel Ries was the first on stage. Her album ‘Ghost Of A Gardener’ was released early this year. On the album, the track ‘Standing Still’ features Gregory Alan Isakov’s rich harmonies as a special gift. Tonight Rachel was solo; and the feel of course was altered, pared back, even the message felt different. It was from her alone, not from that harmonized couple. As her voice held the room in content quiet, it seemed she could actually still be waiting for him in that house in Iowa.

Then she paused to talk and tell us about her return to Belfast at the end of November in No Alibis Bookstore. After which she challenged us. “Here’s a test”, she laughed. “You’re a quiet bunch … can you sing?” As she sang ‘Words’, we did the “la la la”, and we did it very quietly; and even that faded off at the end. We weren’t very good singers, but we were good listeners, and that was important. Rachel’s voice needed to be heard properly. Her lyrics required our attention.

She was standing when she performed ‘Ghost’. It was moody and lush. The room continued to be pin-drop silent soaking up her low guitar tunnelling through the flawless vocals.  The lyrics were laden with pictures. And the last note did not give any clue it was ending the song, until it did. It was like winter had suddenly appeared; it was time to get out of the garden. With humble goodbye and thank you she left the stage for Anais’ set.

Anais Mitchell’s opening song was ‘Willie Of Winsbury’, from the album she released last year‘Child Ballads’; her own take on the traditional songs collected by folklorist  Francis James Child. With the melody and crystal clear voice of a classic folk song she stood with her guitar and commenced to walk the audience into a landscape of princes and riches. For the first moment after she finished, the room was silent, following her, not sure if applause would just interrupt it all. Then the applause started, and the tone of the evening was set. (‘Willie Of Winsbury’, by the way, won this year’s BBC Folk Award for Best Traditional Song)

The opening bars of ‘Now You Know’ were ever so slightly Nick Mulvey, which all changed when Anias’ strong and childlike voice kicked in. Before the song however she ran us through a practice session as she wanted us to join her on the chorus. So we practiced while she played her guitar; and she laughed. “There’s like two of you singing” she crooned about our weak efforts, “but thank you both”.  I suspect two reasons for this. One was that Rachel was right; we were “a quiet bunch”. The other was that we wanted to hear her voice, her timing, and her range and her warmth.

Her latest album ‘Xoa’ was released in October. It’s a collection of songs old and new that she performs solo. She laughed as she told us that she liked the posters in the “bathroom” in The Black Box. There was one in particular that described the music it was promoting as ‘desolate, naked and sensual’, and that is how she wanted the songs on ‘Xoa’ to be seen.

The track ‘Two Kids’ is off ‘Xoa’. It has verses written in dialect by a Syrian poet she met while traveling. He wrote half of the song from the view of a Syrian child. Anais wrote hers from the angle of an American child in a family preparing itself against the promised terror attacks. “My daddy’s house is the safest of houses. He sealed up the windows so no air gets in …” Beautiful singing and powerful words. The verses we understood left that empty feeling, the one where you want to dismiss this as fantasy but you know it’s out there. The Syrian verses were gentle and curved to hear. Not understanding the words allowed us join up the dots ourselves; with the pictures we see on the news. Let there be monsters.

She told us with an almost confessional tone that she wrote ‘Shepherd’ while “under the influence of a lot of ballads”, and that it is based on a novel her dad wrote called ‘The Souls of Lambs’. With simple guitar her singing was lighter than the story that was unfolding. Her vocals faded and grew like seasons as she moved her head from side to side past the microphone. The shepherd’s wife died in the end, and I really didn’t want that to happen. Of course the fact that I wanted a happier ending is of no consequence. The fact that she had me hooked into this story is more to the point. Hooked to the very last line.

‘Clyde Waters’ (The Drowned Lovers) brought us back to ‘Child Ballads’; brought us back us into a world where curses are real and you can make deals with rivers. She owned the stage while she was singing this. In fact she owned the room. Her habit of stepping back from the microphone and raising her knee while she was singing was well established by this stage. It helped punctuate the song.

‘Young Man In America’ was stunning.  Rachel joined Anais on stage for this last part of the set. She sat behind the keyboards but simply used the microphone for her harmonies. The pain and the cold tough life of this song did stun the room, whether individuals had heard it before or not, we were silent to the core. Last line “I’m gonna climb back into the bed you made me in” fell off the stage and rolled into the room and we weren’t sure what to do with it. A stark, incredible performance.

Then there was ‘Coming Down’, with Rachel on piano-like keyboards that added depth and Anais gentle on the guitar. This song was built to make you ache. And when this pair keened those harmonies it was hard not to. “Don’t leave me like that, not yet, don’t set me free”.  We were transported.

‘Why We Build The Wall’ is another on the ‘Xoa’ album and it is another hard-hitting no punches spared epic of a song. Anais was back on her own with this one. “Because we have and they have not, my children. Because they want what we have got”…. “The enemy is poverty and the wall keeps out the enemy”. She was stamping her feet for percussion and emphasis.

The sweetest sound of the night was preserved for the last song. ‘John O’Dreams’ brought Anais and Rachel off the stage onto the floor, standing just in front of the tables. They handed a sheet with the lyrics over to an unsuspecting audience member, and with two voices and one acoustic guitar they proceeded to pad the room with their singing for us to lean against. It seemed the only movement was them intermittently leaning over to check the words on that page. We were being lullabied; we were in the safest space. Everything was good.

A night that had moved from fairytale to war to social injustice and back to otherwordly romance; and ended with jam on the merch table. I had been led into a secret garden and then reminded of hurts, and all that time worse things were happening to other people. Thank God for John O’Dreams. 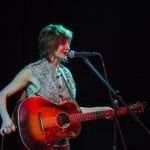 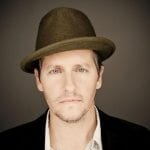 Josh Rouse and the Happy Vibe