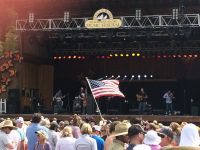 Saturday night at Telluride, Sam Bush opened his two-hour set with an instrumental version of “The Star-Spangled Banner.” There was a flag in the audience — it had been there all weekend — popping up every now and then. I’m not sure if Bush had planned the National Anthem or not, but when the crowd caught on, you could see some hats off, hands over hearts here and there, and folks with their eyes on Old Glory. Close to us, people were singing. The whole thing was just about as patriotic as it gets at a music festival. When it was over, Bush hollered, “Play ball!” The moment passed, and we were back in bluegrass mode.

We often say that bluegrass is American music. We mean, of course, that bluegrass was invented in the United States, invented here in the sense that the elements of music and cultures pre-dating the United States were simmered in our melting pot for some time before being extracted and fashioned into a genre. One of my favorite quotes about bluegrass comes from (who else?) Bill Monroe:  “[It’s] Scottish bagpipes and ole-time fiddlin’. It’s Methodist and Holiness and Baptist. It’s blues and jazz, and it has a high lonesome sound.”

Like the United States, bluegrass was created out of these diverse cultural and musical traditions, then set about defining itself, becoming distinctive and recognizable. There were rules about the way bluegrass should be performed, even down to what you were supposed to wear to play it. There is comfort in categorization. People liked that they knew what it was, this bluegrass music, and that it had an identity that either included or excluded those who followed its rules or didn’t.

Back in the mid-seventies, when the Telluride Bluegrass festival was starting, its core music was progressive bluegrass, or newgrass. Sam Bush celebrated 40 consecutive years at Telluride this summer, dating back to the second festival in 1975. That year, he was there with New Grass Revival, a four-year-old band playing a fledgling festival on faith. No New Belgium beer, no condos, no legalized marijuana (note that I said legalized).

As a boy growing up in North Alabama, bluegrass and gospel were the first forms of music I heard performed (often together). People who “weren’t much on dancing” might shake a leg at some gathering out in the middle of nowhere as a local group played on a makeshift stage or, if it was a highbrow gathering, on the back of a lowboy trailer. In my mind, this was a world of bib overalls and boots, just south of and not that far removed from the land of Uncle Pen. As a teenager, I turned away from all that, unable to see a connection between rock and roll and the music of the fiddle and mandolin. Sam Bush and the other pioneers of newgrass were already working on that problem for me, though I didn’t know it at the time. Forty years later, it is pretty easy to see that this progressive bluegrass movement was natural and organic. Distinctive music created out of diverse cultures revises, redefines, breaks apart, coalesces, revises, redefines, etc., etc.  So it was with bluegrass.

Which brings me back to the Telluride Bluegrass Festival on Saturday. When Sam Bush stopped us to hear the National Anthem, he wasn’t engaging in chest thumping patriotism. I’m pretty sure he was reminding us that — good and bad, rich and poor, female and male, light and dark — we are Americans in the best sense of the word. We are changing as we go, each generation seeking something in tension with the previous generation, building on the best, letting go of the worst. We gather on the east side of a town born out of mining — old-school mining, where everything the land could give was taken, where workers suffered for a day’s pay that would barely purchase an egg, where corruption and crime ruled for years.  Now it is a place of beauty, and we “festivate” in a manner very focused on respect for the environment.

Nestled here in the Rockies, we celebrate music born half a continent away in Appalachia by playing that music, along with music from multiple genres. The Colorado Symphony Orchestra plays Mozart with Bela Fleck on the same stage that the Dave Rawlings Machine plays Led Zeppelin. One of the earliest New Grassers, Peter Rowan, shares his stage time with Tibetan singer Yunchen Lhamo. Rock Icons John Paul Jones and Steve Winwood play the Town Park stage, as does former Little Feat keyboardist Bill Payne. Pop songs are fashioned into acoustic numbers while old standards are revitalized and sometimes re-imagined.  In the crowd are hippies and yuppies, campers and condo people, locals and travelers, saints and sinners.  Our tastes differ dramatically, yet we find commonality in an appreciation of virtuosity. We expect the best out of every performer for four days each summer solstice and we are not disappointed.

Planet Bluegrass booked Dailey & Vincent to play the gospel hour on Sunday morning. They are a very successful bluegrass group, winning IBMA Entertainer of the Year three times. They are not, however, the typical Telluride act — a little more mainstream than we’ve come to expect. As the program for this year’s festival says, Dailey & Vincent “have been selling their CDs (a Statler Brothers tribute, a gospel collection) at Cracker Barrel.” I love the Sunday morning session, so I walked over to see it as I was about to finish this piece. Great mix of gospel, country, and bluegrass music.  They were fantastic. One of the better Sunday morning crowds I’ve seen showed their appreciation by singing along, dancing a bit, and giving several well-deserved ovations. The surprise for me came when they told the story of their first Number One song — a gospel tune called “By The Mark.”  The songwriters? Gillian Welch and Dave Rawlings. A great Sunday morning of music and a final paragraph for this piece. Hard to beat.