All I Want For X-Mas…

“You know it’s going to be an older crowd when they don’t bother putting up the barrier at a punk rock show,” said one of The Showbox’s security guards, when I asked her where I was allowed to take photos.

X, the legendary Los Angeles punk band, was playing in Seattle this night as part of their “Family X-Mas Holiday Tour” before continuing on to Portland for two shows.  All four original members from 1977 would be here, and they’d been selling out throughout the tour.

I was given two options: Stage Left and Stage Right. First three songs, last three songs. If I wanted to stand for four hours, I could choose to be right in front of the stage, sans barrier. Being one of the “older” crowd members, I chose the sides instead. I’d also purchased VIP seats and a table near the back of the cavernous Showbox weeks earlier, so I’d have a place to rest my belongings (including my dear, patient husband) and have space to take notes. Sitting in VIP, though, I felt detached from the action, like we were watching the show on TV.

I wandered to the front of the stage and schmoozed with a few front row standers before the rest of the audience showed up, hoping to get a spot near them for a few seconds and take pics later in the evening. Wishful thinking. Soon after, hundreds of people flooded in and took their positions on the floor and overflowed into the bar areas. It must have been close to a sell-out crowd here, too. There was no room to move to the front without getting beaten down. With a mostly male audience, and most of them taller than me, I didn’t have a chance. There were quite a few grizzled punkers with old X t-shirts and tattered leather vests, and I wasn’t about to get in their way.

Opening for X was Mike Watt, who entered the stage in a blue and white plaid shirt, looking like an everyman. He unrolled a gigantic, three-foot-long setlist, placed it on the stage floor with dramatic flair and strapped on his bass. Suddenly, he became someone completely different: A Punk God.

His band, stripped down to bass, drums and organ, all lined up on the front of the stage. That’s it. Who needs a guitar? The sound they produced was incredible. Jerry Trebotic’s drumsticks were a constant blur throughout the set, interrupted only by quick stops, starts, and tempo changes. Mike switched off vocals with “male organ” Pete Mazich. They howled and growled their way through two-minute songs, barely pausing between them.

Mike Watt sweat through his plaid shirt by the end of the set.

I cannot compare this X show to any other show because I’m ashamed to admit, I’ve never been to an X show before. I finally saw X bass player and co-vocalist John Doe for the first time in June when he came to The Triple Door with Cindy Wasserman and Jesse Dayton. I really don’t know how I ever missed any of them, considering their music hits me right in the sweet spot.

The crowd was well-primed after Mike Watt’s fiery set. I took my position on Stage Left, anxious to see the band leave the green room and trot up the steps and onto the stage. Cheers and whistles erupted as John Doe, drummer DJ Bonebrake, vocalist Exene Cervenka, and guitarist Billy Zoom took their positions and plugged in.

First up, “Beyond and Back” from 1981’s Wild Gift, ignited the audience into a head-banging frenzy as vocalist Exene Cervenka belted out the lyrics. The excitement and energy was almost palpable, and X responded accordingly with smiles and nods to the rowdy crowd. They blasted right into “In This House That I Call Home” next, barely scratching the surface of the two dozen greatest hits and deep cuts to come. My little point-n-shoot Canon PowerShot struggled to keep the frames in focus, as there was a whole lotta shakin’ going on. The Showbox’s wooden floor shuddered under the weight of the bouncing mob. 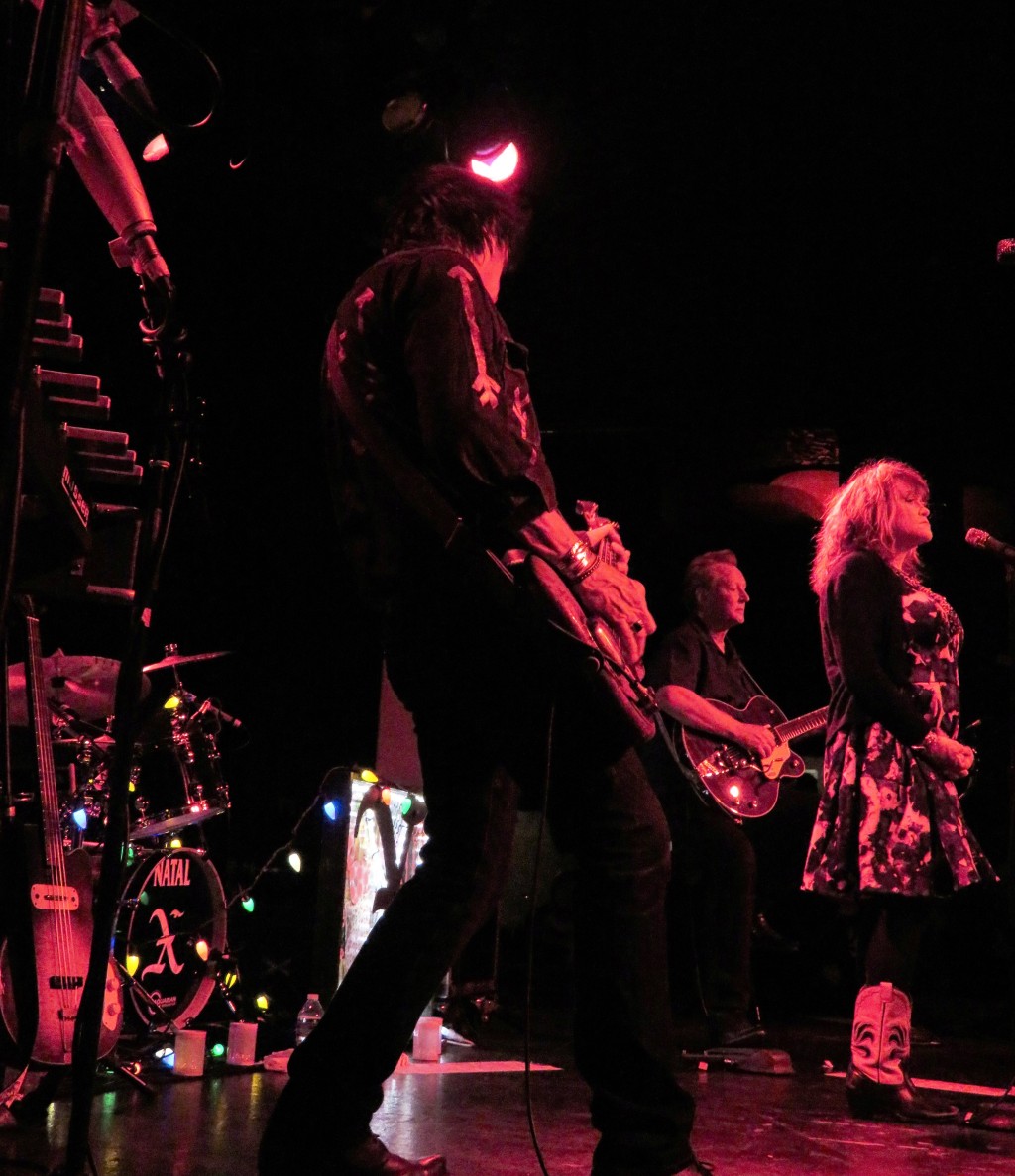 Besides a few words about playing in Seattle and props to Mike Watt and The Secondmen, X didn’t have time for small talk. They had a long set list to plow through. A few songs later, though, Doe stopped briefly and exclaimed, “I’ve got five words to say tonight: Don’t Throw Shit, and…Fuck Yeah!” Apparently the liquor-fueled audience was getting a little rowdy, and plastic cups or other shrapnel ended up on the stage.

“Breathless”, one of my favorite covers, rocked as hard as it did in the 80’s; the only difference was Billy Zoom’s seated stance. Zoom stayed seated during the entire show, having recently received the all-clear after a bout with cancer and chemo treatment. An “X-Mas Miracle”. He could have stayed home and spent time with his family to rest and recover. Instead, he joined X on their multi-city tour. It was the punk rock thing to do. My husband called his playing “amazingly effortless”, considering the variety of sounds he could produce from that guitar, sporting a serene, Buddha-like smile on his face all the while.

DJ Bonebrake had an ominous, extended drum solo on “Hungry Wolf” as Zoom’s howlin’ guitar surrounded us. Another drummer stepped in to replace DJ for a couple deep cuts, and DJ also accompanied on xylophone for a few songs.

On “Come Back to Me”, Billy Zoom picked up the sax to play his solo, and the crowd cheered loudly. He carefully stored his guitar pick on his sweaty forehead.

The songs, some almost 4 decades old, still seemed fresh and relevant today. Doe mentioned “The New World” just never goes away. The lyrics are still current, unfortunately. “True Love” was played in a totally different, rockabilly style, and with acoustic guitar. A switcharound, as Exene called it.

Doe worked the front row with smiles and a tease of his bass. He seemed loose and energized, and played to the crowd.

Exene twirled in her flowery country dress with cute cowgirl boots to match, belting out song after song, hardly stopping or resting, unless it was John’s turn at the mic or Billy was shredding a solo. 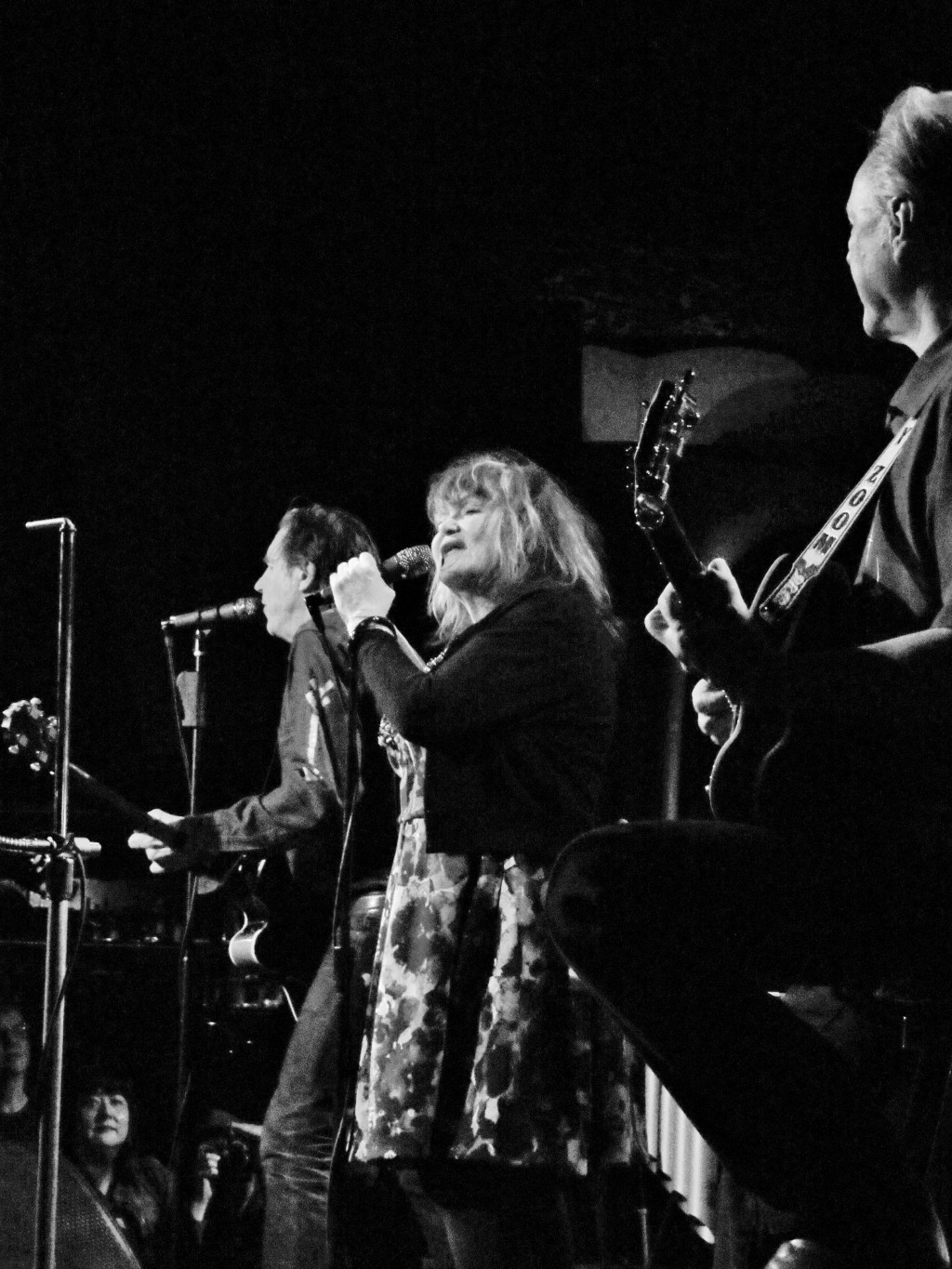 Near the end of the set, Doe also mentioned Los Straitjackets played tonight (another must-see band) with Nick Lowe at Seattle’s Neptune, one of their stops for their “Quality Holiday Revue”. I had half a mind to book over there after X, but we would’ve never made it in time.

The three-song encore finished with the frenetic “Devil Doll”, and the sweaty crowd stayed until the very end.

Not a Christmas song in the set. How punk rock of them.

I forgot the stresses of the holidays for a few hours. All that pre-Christmas drama just melted away under the hot lights and cranked amps. I immersed myself in the music, watched the crowd, and watched the band’s interaction with them. These are a few of my favorite things. Merry X-Mas, everyone. 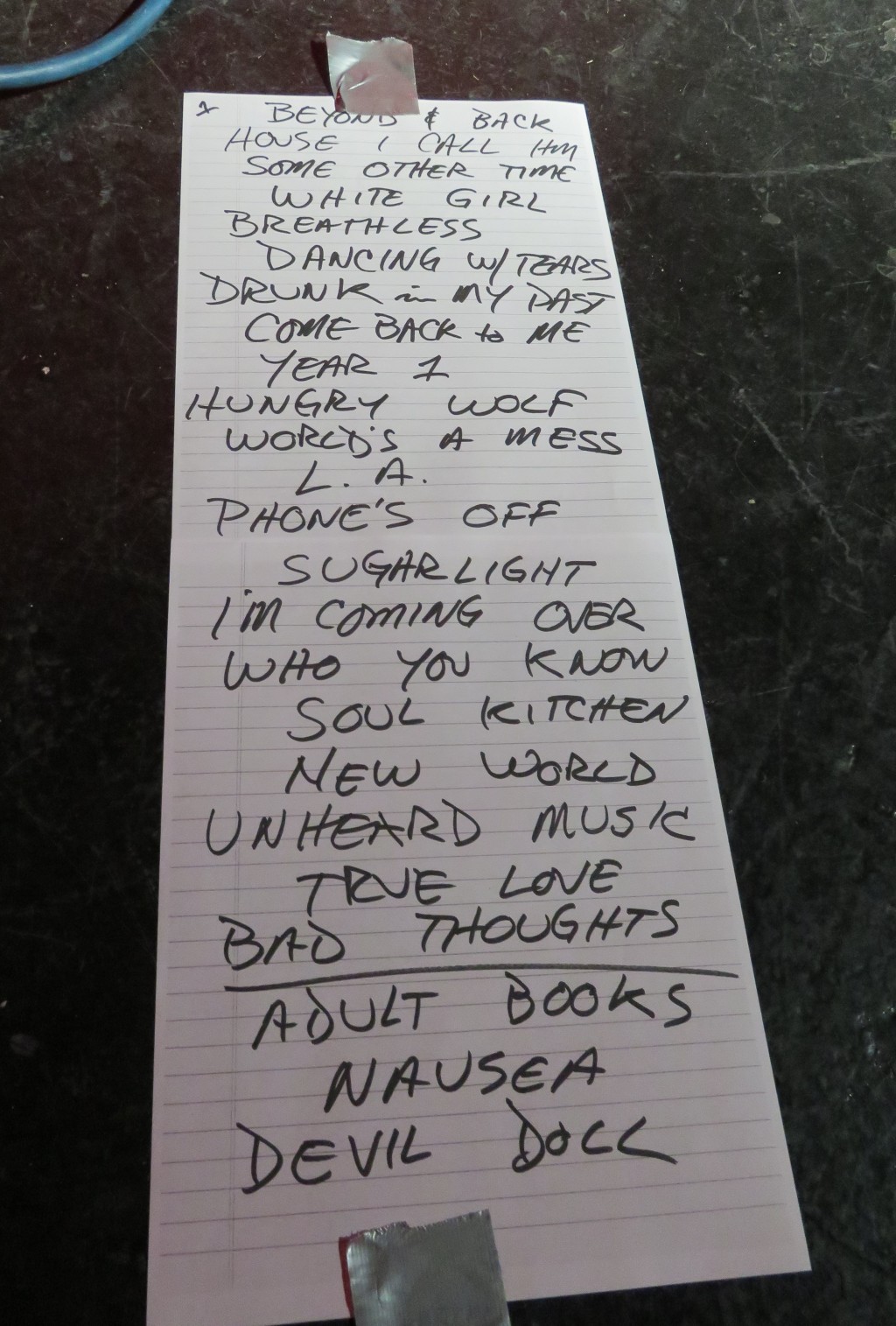