This one has lingered on my desk for a few months but I noticed that I tagged it as something worth talking about. Like some earlier artists who are a little too traditional in folk for me or Liberal, I often come across artists who transcend the roots’-old styles and connections to the hard line and find someone who is just genuinely a good singer-songwriter and musician who cares about what he sings.

Cambridge, MA guitar fingerpicking/singer Rick Drost is such an artist. His subjects are usually jilted lovers, leftover seafood, home, family, and having an optimistic view on life. So, if you’re looking for another Phil Ochs this is not the place. He does tread the edge of novelty but he never goes full tilt into the territory of Roger Miller (who wrote many great songs too), Hamilton Camp or Ray Stevens. As you listen, you will hear the history pour from his arrangements – this man has been writing tunes since the 60’s and that magic is still evident in this production. It’s not retro – it just possesses that kind of bracing rootsy discipline that was packed generously into so many folk songs of another era. 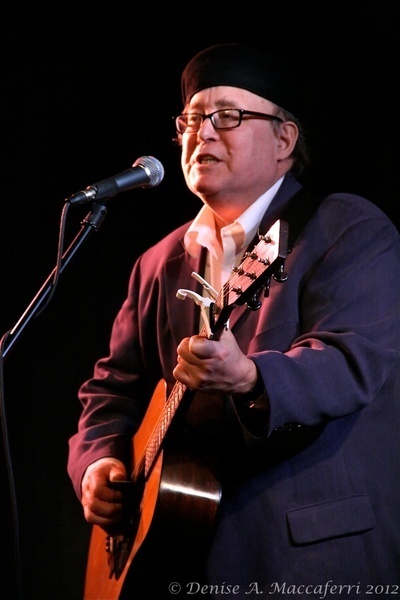 So, anyone who likes those types of songs won’t be hammered with wars, budgets, blood and guts, protests and politics. Just everyday issues that in some circles – matters more. Drost is an engrossing storyteller – much in the same mold as Tom Rush, Tom Paxton, and John Sebastian. With track one “Don’t Remember Train,” he taps into that rich vein and comes away with validation that folk music is alive and well in the voices like Rick.

This song has some beautiful Drost acoustic picking and Rick’s voice – while in a patent intonation and tone style – is perfect for these types of story songs. Rick doesn’t pretend to be Woody Guthrie or another Victor Jara or even Dave Van Ronk. He’s just a modern-day troubadour. It’s like handing a guitar to four different players and watching each tune that same guitar differently. Each will pull a different sound from it. Yet, it’s the same guitar. This is what Rick Drost is capable of doing.

For the most part, Rick seems to have an even keel vocal approach but I can hear the potential for his being a little more raspy and dramatic. Evident just a little on the title track “Turning the World,” which is just a basic tune but the smoky Drost voice with the light touch cello and acoustic guitars is like brandy.

Track three is a great melody with a little accordion touch. Drost is not the intense folk-singer Dylan was, he isn’t overly traditional like Pete Seeger. But, he does have a little of the old time feel that was evident with Theodore Bikel, Burl Ives, and even the actor-folk singer Will Geer. He taps into those folk songs (which here, Drost has written) that are just beautifully rendered stories, memories, moments and places. Not everything needs to be a statement. Drost understands this and his approach is purposeful and endearing. So, with the gentle picking intro to “Old Player Piano,” Drost sings with the patience of The Chieftains, and Christy Moore (Moving Hearts). He sounds as authentic as any Irish folk band from the old country.

Drost sings in many different orbits. “Wyethstown,” is sung with a voice similar to that of the late folk singer David Blue (S. David Cohen) – who also had a beautiful whispery monotone-type vocal-display with the melody in his projection. Many fans considered his music acoustic alchemy. Tom Paxton uses this effectively as well. Melody-wise this is mindful of the quality of Tim Hardin. The way the cello works around the lyrics – more like this and Drost will develop a style that will become a signature – same as Tim Hardin who was consistently good: (“If I Were a Carpenter,” “Reason to Believe,” “Red Balloon,” and “Misty Roses”).

By track 7 Drost continues with his David Blue type (“These Twenty-Three Days in September,” “Fire in the Morning,” & “Ambitious Anna”). But also pours some quirky and creative Tom Rapp (Pearls Before Swine) technique into “Revendon.” An ode to misspent youth. I liked this one. It shows Drost with diversification in his beloved genre. Another avenue for Drost to explore as this is somewhat different from your younger folk artists. I find Drost — more affecting and challenging.

Walking the tightrope of novelty – somewhat effectively – Drost tackles a tune called “Lucky Lobster Rag,” which is also the territory of a similar artist I have mentioned in the past. The obscure but wonderfully talented Sam Leno. Leno’s “Ordinary Man,” album from the 70’s was filled with these types of modern-day vaudeville-burlesque-dancehall songs (“Oh Joanna,” & “Bring It Back”). All delightful and I am happy to hear Drost trying this with quite a bit of success. The soprano sax gives the tune a little old-fashioned touch that is sometimes all the lift an old style needs.

Track 9 has an old-fashioned Euro-folk balladry in “Juli and Romy.”  But this isn’t in the style of an American folk singer. It has a melodic Al Stewart (“Genie in a Bottle”) and Alan Price (“Simon Smith and his Amazing Dancing Bear,” & “Tickle Me”) tone. This is a pleasant song about a Valentine to a pair of Boston Public Garden swans known the world over as Romeo and Juliet. The light cello and accordion accompaniment turn in a wonderfully sweet confection of a song. No heavy lift. Just delight.

“Still Point,” is played with Drost’s adept fingerpicking and vocal. It’s all reminiscent of the legendary late John Martyn in form. Drost doesn’t have that Martyn angst and folk-blues ache. He does have the ability to communicate with his voice and this ode to meditation. Where it could come from, how it would begin and how it’s used. This is one of Drost’s finest vocals. Not as folky oriented because the piano and bass support him with a nice purposeful middle-of-the-road lite jazz low-key yet efficient mood. Even a jazz singer at a piano bar could master this beauty and hold the attention of the entire room. “….as God writes your name in his hand.” Indeed.

Upbeat – is the surprise in “Buffalo.” A semi-autographical rocker about Buffalo, New York with a rock approach that is very 60’s in the discipline. Drost is effective with the faster tune and it has a bit of a Trini Lopez feel because sometimes he too, just played it for a good time. But Trini’s early folk-rock hits were driving and exciting and this song features some nice bass and acoustic guitar work.

I guess Rick Drost saved the best for last. “Seasons Search,” is a five-minute track with a Fairport Convention sensibility. This is attractive. The cello bellows nicely along with the bass and while many of the songs on this album are good – as songs – as stories – this is a Drost masterpiece. It has a mood, personality, and intensity. It’s like the difference between a fine whiskey aged for ten years against one aged for twenty-five. I hear a little of early Strawbs, Magna Carta, and Dando Shaft – all fine veteran English folk bands that had a certain eccentric appeal. Same as Tom Rapp’s Pearls Before Swine — though Rapp was more medieval in his strange acoustic-mandolin folk approach. There is an effective old-fashioned thread of notes that run through this melody but it sustains itself with a certain modern attraction. Drost sings with the same smoky vocals as Strawbs’ Dave Cousins – though Drosts’ vocal is a little more satiny. I like Drost’s deeper notes in this song toward the end – chilling and his voice is consistently good because perhaps he enjoys singing this saga.

Jon Shain produced the album in North Carolina and Massachusetts. Shelly Payette created the graphics for the CD. A four-panel plain line art rendition with a beautiful full-color 16-page stitched lyric book. Sometimes simple is effective – it is here.