A quick glance at the album cover and I had Geoff Gibbons pigeonholed as another country wannabe singer/songwriter trying to enhance the twang with an Americana backdrop. Buffalo Hotel? Once again, boy, was I wrong. The guy is not only not country (he doesn’t really approach real country, in fact) but there is no evidence of any twang at all. Truth is, Gibbons is modern soft rock and as good as I’ve heard. He touches on so many artists I have heard in the past, I almost lose him in remembrances of music past. Not that his music is not his own. To the contrary, it is fresh and at moments downright inspiring. But I can’t help hearing pieces of gold in his songs— bits of Bob Lind, Danny O’Keefe, Jackson Browne, Jeff Talmadge, Bobby Bare, T Bone Burnett, and Men At Work, though not as rock-y. He even occasionally hints of later Brinsley Schwarz, which totally caught me off-guard. I tell you, the guy has a touch.

That touch flashes me back to the mid-seventies and the so-called “Los Angeles Sound,” music dominated by the likes of the Eagles, Linda Ronstadt, Jackson Browne, J.D. Souther and the like. The sound of smooth. It drove me crazy back then, radio jumping on it like it was the savior of music and radio was at the time the biggest game in town. You couldn’t get away from it. I liked the music I didn’t have to hear all the time— Richard Torrance, John Stewart, Country Gazette— but when you couldn’t get away from it…

Of course, these are different days. Radio is hardly dominant in this brave new world and mental issues from overplay is easily corrected by the click of a mouse. My clicks recently have been used to bring music like this into my ears.

I found Gibbons through the Music Telegraph— word of mouth. I have friends, see, and they know I am on the lookout for anything beyond the norm musically and lyrically but they also know I don’t want to be wasting time listening to the mundane. It has resulted in my receiving few recommendations. But when I get them, I can pretty much put them in the bank. This one has already been deposited.

You can hear it, can’t you? Sometimes I don’t trust myself, immersed in music as I am. I sometimes lose touch. But I hear this album and if it is not what I believe it is I don’t want to hear it. I want it to be good. I want it to be much better than good. My ego demands it.

To think that I might not have even found this album but for a good friend disturbs me. We used to pass music like this along every chance we got back in the day. This album makes me want to start doing that all over again. 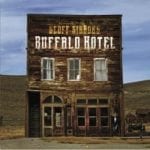