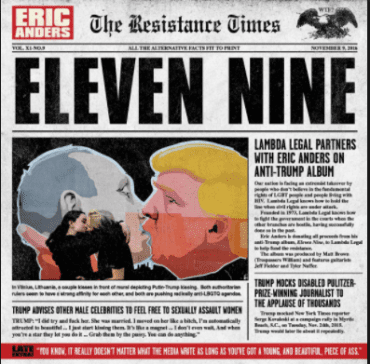 Eric Anders is back at it again with his new release, “Eleven Nine,” which is currently aimed at Donald Trump. A folk-laden record, Anders delivers the goods once again with a slightly political and powerful message behind him.  Throughout the record we hear an artist passionate about his craft and the upheaval of his country. Filled with gorgeously insightful pieces, standouts on the record include “This Fire Has Burned for Too Long,” and “Do You Feel?” With dashes of prog and classic rock laced throughout, the record proves to be powerful from start to finish.

Often compared to artist such as Paul Simon and Nick Drake, Anders sound and tonality is remarkable. On the album he brings a political discussion to the table that will hit close to home with nearly every listener in its path. His voice and lyricism is filled with passion as he tells the story of the every American in 2018. With no left unturned, his musical thoughts come to life within the record, creating an insightful release that will stand the test of time. Do you yourself a great favor and pick up a copy of “Eleven Nine,” as Eric Anders has released one of the most prominent records of the past several years.

“This Fire Has Burned Too Long” on Youtube:
https://youtu.be/UVolkR1T9SA