A Healthy Dose of Adirondack Music 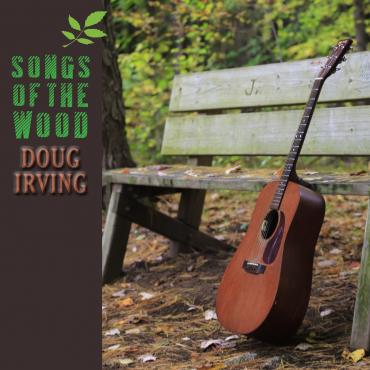 Songs of The Wood

Doug Irving is a songwriter whose career has spanned decades and resulted in the release of 16 albums.  Nearly 40 of his songs have been covered by other artists, many of which were written during an extended stint as a Nashville songwriter.  Irving is an accomplished musician on both guitar and piano, and his style defies pigeon-holing.  Is it Folk, Rock, Country, or Swing? It’s all of them, with a good bit of synthesis of gendres. Currently living in Queensbury, NY, just outside the Adirondack Park, his most recent release, Songs Of The Wood focuses intensely on the history and natural beauty of the Adirondacks.

The opening track, Open Road, has an anthemic feel, not unlike the best of the California Country Rock era. It’s easy to imagine it as part of Jackson Browne’s catalog. Pat Severs provides a nice steel guitar line.  Into The Wood made me think of Jethro Tull, if not quite so hard rocking.  Must have been the flute part. Isaac Jaques is the tale of the Jesuit priest, the first European to see Lake George, which he named Lac de Saint Sacrament.  The song relates how Jaques met his death on a return to the region at the hands of the Natives.

Camping is an ode to the joys of roughing it in the wilds of the Northeast. Fishing for Northern Pike, cooking over an open fire, and swimming all get their accolades and the song is graced with a tasty lead guitar line.  Next up, Jonah, recounts the biblical story of a prophet gone astray. It closely follows the scriptural narrative in a slightly tongue in cheek delivery, recalling the style of Christian songwriter Don Fransisco.  Log Jam is a tasty instrumental featuring side man Pat Severs.

Just outside the village of Lake George is a highway up neighboring Prospect Mountain. There used to be a hotel at the top, served by a cog railroad, and their story is wistfully recounted in Prospect House (the train don’t run here anymore).  “From the front porch you could see, Clear from here to Albany..”

Black Flies bemoans the biting creatures of the North Woods, highlighted by a searing lead guitar. Glory Bound descriptively admires the old boats found on so many Adirondack lakes, with a pleasing swing feel.  Mill Town, co-written with David Hughes, takes a longing look back at the rise and fall of the western Adirondack village of Newton Falls.  The story has repeated itself all over the Northeastern US over the past 50 years. “When the train was running, they used to make paper, They used to make steel…in this mill town.”

A trip to the Maine seacoast inspired the gentle Lighthouse.  Damm Strait is a typical Country lament about a sure hit song whose rise to the top of the charts is stalled at number 2 by another hit from Country music legend George Strait. It’s upbeat and danceable, and features Doug Moody’s fiddle.  As might be imagined, Name on the Wall salutes those who have stood in harm’s way for their country. Like so many of these songs, the lyrical detail that Irving goes into is striking.

One of the prettiest songs on the CD is Changes, co-written with Wes Cunningham.  Cunningham is a creative writer in his own right, and their combined talents result in finished product laden with “hit” potential.  Irving pays tribute to the luthier who build his guitar in This Old Guitar.  Again, his attention to specific details, like the types of wood for each part, is noteworthy.

A eulogy for Jackson, the beloved family dog, closes out the CD.  16 well- crafted songs; Doug Irving hands us a pleasant evening of rhymes, rhythms, and soothing notes.  The afterglow hangs around like the smoke from an Adirondack camp fire.

The CD is available from Fool’s Hill Music https://storerevenue.biz/foolshillmusic/order.asp#dougirving