A Casual but Powerful Jon Butcher Plays the Blues

What a treat it was to see Jon Butcher perform what amounted to a living room show last weekend! As Jon took the stage, he noted that it would be a casual and intimate show due to the small crowd; despite the size of the audience, Jon delivered a powerful performance as he always does.

Jon is a terrific blues and rock guitarist. Early in his career, he was compared with Jimi Hendrix although he counts Bob Dylan, Taj Mahal, Richie Havens, and John Lennon among his early influences.

The first song Jon performed was ‘Ain’t No Sunshine’ and it was a beautiful rendition. After he played that song alone, he brought Jeff Keithline to the stage to play upright bass. Tomo Fujita, a blues guitarist on the faculty of Berklee College of Music, was added next. He played a few songs, then left the stage for guitarist Dennis ‘Fly’ Amero (a member of Orleans).  After the set break, all four played the remainder of the show.

Jon is clearly at ease on stage, regardless of the type of show (I have seen him with his band, Jon Butcher’s Axis, as well as a duo show with Charlie Farren). He told us a story about an experience with Taj Mahal early in his career. He mentioned writing a song for the television show Deadwood with the great bassist Leland Sklar, and then played it. Jon said that he is not a perfectionist, but you would not know that from the high quality of his performance. Perhaps the perfection came naturally!

Other songs included in the set were ‘It Hurts Me Too’ and ‘I Found True Love Just in Time’; they also played an original song about couples counseling, not a common topic for songs! A beautiful rendition of ‘Over the Rainbow’ was one of the last songs in the set. Jon and Fly performed a few songs as a duo, including the Orleans’ hit ‘Dance With Me’.

The highlight of the show, for this writer, was Hendrix’s ‘Foxy Lady’ because it truly showcased Jon’s guitar chops. Well, maybe the highlight was meeting him and getting a hug!

For photos of this show, see Suze Reviews the Blues. 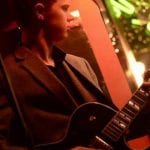 Andy Poxon Kicks Off a Spirited Double Bill at the Birchmere