0
0
Shares
NOTE: The decision to alter the image above was generously left up to the author, and was not the decision of No Depression organizers/management.  Scroll to the end of the post for a description of the image.
Excuse me, but I’ve had a bit to drink this evening as I write this. Having sent some awkward drunken texts in my life (not to mention all those phone calls back in the stone ages), I should no better (ooooops, “know” better) than to write a blog post with more than a few bourbon and sodas in my system. but this just needs to be said; I need to get something off my chest.  I’m probably about to burn a bridge with the genuinely good folks at Sugar Hill Records, but so be it.  Sarah jarosz pissssses me off. Despite her apparent charm and sweetness, I find something wholly reprehensible about her artistic output. Frankly, it’s bullshit. It’s unnerving, unfair, and ridiculous. I’m sure you’ve noticed it, too, if you’ve allowed yourself an honest appraisal of her work rather than relying on the gushing praise, positive reviews, or the artful photographs that are all part of the modern manufactured publicity machine. Here’s the deal… There is absolutely no reason in hell that this single person, this young upstart artist, should have been bestowed with so much damn talent at such a tender age. It’s infuriating.

How does this happen? What, is she the next incarnation of the Dali Lama? Why does she get all the damn talent?  As painful and tragic as they are, I can get my head around natural disasters, famines, wars, and poverty.  But, this is the straw that broke the camel’s back.  Obviously, if there is a God, He/She is not just.  Favorites are chosen, others are neglected.  I suppose the bright side, however, is that He/She must love roots music to have plucked young Sarah Jarosz from small town Texas and infused her not just with remarkable ability, but also the artistic maturity to harness it in sublime ways.  It’s not right, and someone needs to say it.

Ok, I was kidding about the bourbon (I’ve only just now had a single sip from my first and only gin and tonic.)  And, for once, the typos above were intended.   Us mere mortals sometimes have to rely on artful gimmicks to get attention, a trick obviously not needed for the likes of Jarosz, as proven by her stellar set at Nashville’s 3rd & Lindsley last weekend.  She really does kind of piss me off, though.  It is pure envy, plain and simple.  She’s got it.  In spades.  I’m too lazy to google whether she’s 19 or 20 right now, because what the hell does it matter?  Either way, she’s just released her second album and proven that as a multi-instrumentalist, songwriter, and, especially, singer, her artistry is wise way beyond not just her years, but those of a jealous (almost?) middle-aged writer like myself.

It’s a pure delight to hear her sing.  Despite her ability as a player and writer, it’s her voice that knocks me out the most.  What sets Jarosz apart from so many other contemporary artists is the effortless power and tonal range in her singing.  She can sing in a soft, elegant manner, but also with a deep, guttural earthiness while still maintaining a controlled grace.  That is a quality that cannot be learned, but a gift bestowed by that damn favorite-playing Creator mentioned above.

Playing to an enthusiastic sold out room, broadcast live on local radio, Jarosz began the set with “Run Away,

” the opening track from her new album, Follow Me Down

.  The majority of her set continued to showcase her newest material.  I have to admit, I enjoyed hearing these songs in a more stripped down setting, accompanied only by cellist Nathaniel Smith and Alex Hargreaves on fiddle and mandolin (and, of course, Jarosz on mandolin, guitar, octave mandolin, and clawhammer banjo.)  While the new album is rapidly growing on me (and getting exceptional praise and attention), I much prefer hearing Jarosz without any studio effects.  While this is, perhaps, my own unreasonable bias, I can’t help but feel like “sweetening” her voice in the studio is similar to slapping a coat of glossy polyurethane on an antique Shaker dresser.  As the show continued, the trio confirmed that only a few pieces of well-crafted wood, some strings, and a powerful voice can rival the depth and intensity of any sixteen or thirty-two track recording with all the bells and whistles imaginable.  (That said, I’ll enjoy Follow Me Down during parts of the 99.99% of my lifetime when I’m not listening to Jarosz live.)

While Jarosz’s voice is what I find most compelling, her songwriting and lyricism are also remarkably developed.  Whether the tender “My Muse”

performed early in the set on octave mandolin, or the jaunty Edgar Allen Poe adaptation of “Annabelle Lee”

closing the broadcast set with clawhammer banjo, Jarosz has crafted a writing style that draws upon tradition while expressing a contemporary and personal sensibility.  Her choice of covers also expresses exceptional taste.  There are not too many teenagers who can tackle the likes of Bob Dylan (“Ring Them Bells”

) or Tom Waits, and compete with them toe to toe in terms of performance.  The Waits tune covered by Jarosz on her first album, “Come On Up To The House

,” was part of a short encore closing the show.

I find it hard to express how emotionally moving I find that song as performed by Jarosz.  The simplicity of its bluesy structure gives her plenty of room to explore all of her vocal ability and always strikes me as an example of all the joy capable of being expressed though music.  Forgive my sappiness, but I often am overcome by a welling of emotion when I listen to the song.  Rarely is it played only once when it pops up in my iPod.  Seeing it live elicited the same response, even as I tried to pretend that it was sweat blurring my eyes in the crowded club rather than the mistiness of an overly sentimental blogger.  Come to think of it, if there is a God, perhaps He/She knows what they’re doing after all.  Even if we can’t all have the outsized talent of an absurdly young singer/songwriter, at least we’re given the chance to experience its resonance as I did last Sunday.  I guess I’ll finish my gin and pen an apology to both the Creator and Ms. Jarosz, but it’s only going to be half sincere.

NOTE:  The “edited” image above was a publicity photo of Sarah Jarosz.  The author (me) photoshopped some graffiti over the image – specifically I had quickly scribbled devil horns, fangs, dotted eyes, and the letters “WTF?!” below.  The intent was to lead the reader to believe I had a genuine beef with Jarosz before quickly indicating in the post my only beef is envy at Jarosz’s outsized, exceptional talent.  See, isn’t humor SO MUCH funnier when explained?  (And even more so when explained in the abstract.) 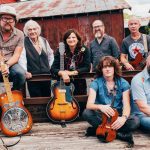