Last June, with what felt like a last breath of grief, my brother, sister-in-law and I drove down the Abilene Highway that runs between Dallas and Abilene, Texas. With the hot summer wind on our backs, we rolled toward a small town, Winters, where my mother’s casket waited for burial between my 46 year-old brother and 34 year-old dad. It was a lonely trip.  At one point, these words came through the car stereo:

”Yes I understand every life must end, uh huh……Stay with me, let’s just breathe…”

There are moments in life when just breathing seems like enough.

It was Willie Nelson and his 24 year-old son, Lukas singing the words of Pearl Jam’s song. It seemed they were singing to our moment there on that heart-worn highway. The vulnerability in their voices was palatable and touching. It’s a song like this, as it reached out to us, is the reason why artists record and we listen. The impact is lasting. Songs and artists like this weave into our lives in unsuspecting ways.

When I talked to Lukas Nelson months later about the song and video he said it was really an act of love between father and son. “I really loved it by Pearl Jam and wanted to sing it with my dad.”  When I said how clear their love comes across in the video that was made to accompany the release of the song, he sighed and said, “You know, Dad was talking with me and my brother the other day.  He looked at us and said, ‘I don’t believe we’ve ever had a cross word to say to each other in all these years.’ The three of us looked at each other and realized it was true. We’ve always gotten along. There really never has been a cross word between us.”

The video is a low-key drive through the soul of a father-son relationship that captures both the love and the sense of mortality each must face. But, there’s a faith to it that ends with a sense of hope even as they part at the end with Willie driving down the highway and Lukas sitting alone in a room where they once shared music.

One thing comes clear in both the video and the song, these two, although there is more than 50 years of age between them, share a strong and uncommon bond that. It’s clear with one listen to the early work of Willie Nelson. On demo recordings of songs like “Funny How Time Slips Away,” and “Crazy,” there is a genuine soul that transcends country stereotypes and cuts to something universal in anyone who has tried to love and lost. Then, turning to the now early work of his son, Lukas, on songs like, “The Sound of Your Memory,” and “All The Pretty Horses,” the same soulful thread is being followed. 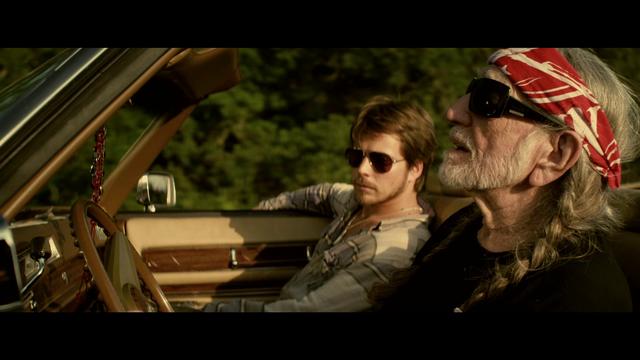 During our short phone conversation, I made one comment to Lukas regarding the song and the video….”It seems like the two of you are just parts of the same soul.” He breathed another sigh and said with utter humility, “Well, I agree with that.  Yes.  That’s true. I couldn’t say it any better.”

As these two vital artists move on parallel paths, with their vocal sounds sometimes hauntingly similar, it’s their spiritual bond that is expressed in song that is becoming more striking.  Although Lukas plays with a passionate fury that approaches the mastery of his guitar heroes, Jimi Hendrix and Stevie Ray Vaughn, when he writes and sings his songs, it’s the continuation of the unique soul of Willie Nelson that comes through like a cool breeze.

The video and song of Pearl Jam’s great song, “Just Breathe,” is an apt homage and tribute to a father and son relationship that is unique in its spiritual bond and its artistic kinship. Although we all have to come to closure in this life, it’s good to know that Willie and Lukas Nelson still have some miles between them before that inevitable time comes.