Ever been to a show and you are simply lost in what occurs in that two-to-three-hour span of time? You allow yourself to be overtaken by whatever happens. You trust yourself completly to the artists and the audience, and don’t care if you close your eyes a bit or dance like a fool or, hell, even cry because you are moved to do so. Well, all of those things happened to me during Wildwood Revival’s takeover of the Museum Stage at Newport Folk Festival last Friday. And damn, if I wish I could live it again. I was lost a bit in the music, here is what I can recall of the magic and mayhem that ensued.

Sammy Brue may be a young gun but the kid has an old soul and already writes like a songwriter with far more life experience than his 13 years hold. He’s a student of the Woody Gutherie songwriting school, and watching him develop as a songwriter and performer these past few years has been a real delight. Brue has more than proven himself in the songwriter’s circle and shows no sign of slowing down, if his Newport debut is any indication of where he is heading. His stage presence is charming and reserved, but when he starts singing and pounding out the rhythm with his feet on the kick drum and tambourine, it’s electric. Watching him open up this set was a sincerely beautiful moment and the way that more seasoned songwriters such as Joshua Black Wilkins and Joe Fletcher have taken Sam under their wing is a true testament to the fact that, if someone can write a great song, age — or sex, or race, or anything for that matter — truly does not matter. This was just a taste of the community and love that would be felt throughout the next three hours of music in the Museum. 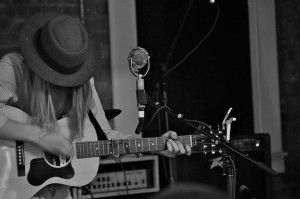 Brue was followed upby a gent familiar to us, whom the Newport Folk Festival folk running the Twitter feed deemed “the songwriter’s songwriter,” and 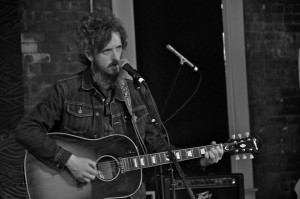 you already know I don’t disagree with that sentiment. Ian Fitzgerald has been proclaimed by many great songwriters — in American Songwriter by his contemporaries Fletcher, Jonah Tolchin, and Joshua Black Wilkins, for starters — to be their favorite songwriter. I think that truly says something about the gift of writing that Fitzgerald holds. He absolutely shined during his set and the typically modest songwriter let out a content smile multiple times during his 20 minutes of song as folks sang along to tunes from his new record. Yes, the guy writes songs that incredible that people feel the need to memorize the lyrics before the record is even out. It has been a pleasure to watch him come out of his shell on stage from when we first met. His witty banter and humor is unmatched by anyone I have ever seen. Except, perhaps tied with the man who would grace the stage a bit later on (hint: ALT). 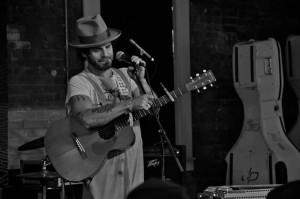 As another special unnanounced treat, which seemed to be a theme this weekend, we got a taste of Langhorne Slim, who was slated to perform later in the weekend. He came in in his usual fashion, just happy and beaming to be a part of something like Newport. He is so genuine in his joy and it is reflected in his performances and his songs. This was another great addition to an already stellar bill.

I have become a huge, maybe even rabid fan of Aaron Lee Tasjan since I first found him. His humor and self-deprecation while maintaining a larger-than-life confidence, an excellent voice, and man oh man his guitar playing … all raised the bar for me on what stage banter and presence means. Genius. His first tune ended up being a nearly seven-minute spoken word piece that had the audience hanging on each and every phrase of his story. He only broke for the occasional chuckle at what he was spouting off at rapid speeds. He ended with my favorite tune of his: “Living Proof.” The sentiment is deep and moving in this song. But with lines like “Cause nobody’s got the time, but everybody has got an opinion / and my opinion is that ‘Damn the Torpedos’ is totally awesome, thank you Tom Petty,” his lightheartedness and wit shines like the brightest of lights. What came after that was an onslaught of incredible act after incredible act. The energy in the room built to a fury of fiery passion and rock and roll, country-tinged ecstasy. 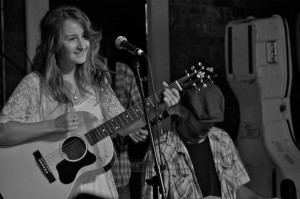 by me at the same time. Immediately, I had a new favorite singer and for the next 20-25 minutes I think my brain may have been hanging out of my ears. She blew me the f*ck away in the best possible manner. Drawing comparisons to Tammy Wynette and Loretta Lynn, sure I can see that, but the pure force and authority she commands in her voice is incomparable. The word “Powerhouse” doesn’t do justice to how this gal sings. J.P. Harris’s band, The Tough Choices, filled in behind her tremendously, to the point that they all seemed as though they had been playing together for a decade. Harris even joined in for a number on harmonies and hamburger-tambourine (if you were there, that makes sense). The bar was raised on how much one artist could rock me to the core. I am still wondering just what happened here, and wishing I could experience it all over again. Margo, please come back soon missy, you always have a roof to stay under and a pad to crash at when you come through Boston.

John Moreland tore my heart out, threw it on the floor, and then danced all over it. And honestly, I am completely 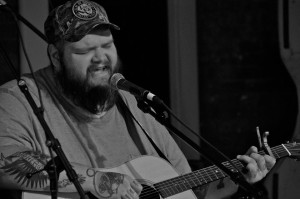 fine with that. Brutally honest, heartwrenching, and stripped down brilliance is what we got from Moreland, who’s “High on Tulsa Heat” landed on my favorites list so far from 2015…and I am sure will land on many best records of the year lists in a few months time. Just him and his guitar, he introduced himself and said, “Here’s some songs I made up.”

To simply call what Moreland pens and sings in his gruff, grittied vocal “songs” seems unfair, as the stories and tales he croons out, exposed and unapologetically … no, these are something far more. It’s a glimpse into the heart and soul of a man, and damn if it wasn’t something of pure magic. Moreland finished his set to a standing ovation — an extremely well deserved, standing ovation. I still have goosebumps. 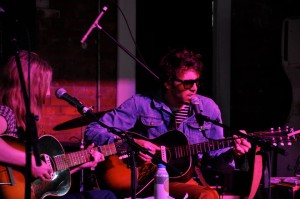 Daniel Romano harmonized and picked his way through a great set. His voice was reminiscent of Bob Dylan. Not too early Dylan and certainly not Dylan today. Perhaps Dylan with a bit of an R&B flourish. And the harmonies added by his partner in crime were wonderful. With the 12-string guitar ringing on out throughout the set, it was really a nice leveling before we all were about to be rocked. 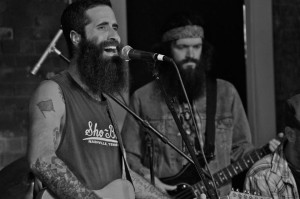 The honky-tonk continued as the Tough Choices and their fearless leader re-emerged to take the stage and get us all moving. Harris, with his low tone growl and inviting demeanor, tore through a catalogue of great tunes that kept the crowd out of their chairs, clapping with hands in the air and their hearts dancing. The entire time his eyes were smiling, because that beard tends to cover up his mouth a bit. But you could see that this was a man who was having the time of his life. That sentiment poured out into the audience, catching us all with the dance-along bug, and man oh man, were we hooked. If charisma was embodied in a person, it’s name would be J.P. Harris. He brings twangy, countrified deliciousness. I don’t remember many of the specifics from J.P.’s set. I was lost, completely lost in the moment, in the frenzy and the time that was being had. I would say that this feeling and experience is better than any time I have been able to recall each song and the order that it was played in. I just let myself go to the tunes that he was playing, and it was phenomenal.

The man of the hour then hit it with his band the Wrong Reasons. I do have to say that one of the biggest highlights of Joe Fletcher’s set was Greg Burgress’s playing. Last time I saw the fellas at the Columbus Theatre a few weeks back, I was impressed with Greg’s guitar skills, but today, man he was on f*cking fire.

They played some old favorites from White Lighter, a new song or two from Fletcher’s “You Got the Wrong Man,” and in true Fletcher fashion had a couple guests up to join in the fun. Keeping with a strong theme of the festival, he paid homage to his fellow songwriter, brother in music, and someone we lost all too soon, Dave Lamb. MorganEve Swain joined Fletcher on stage to sing and play fiddle on “Mabel Grey,” and I cried for the second time that day. It was then that a very special guest I saw earlier through the window joined Fletcher on stage. That guest was one of my musical heroes: Mr. Dave Rawlings. This was a big highlight from the entire weekend. Standing feet from Dave as he helped Fletcher tear through Dylan’s “Tryin’ to Get to Heaven” … that was something else, more than words can describe. Then EVERYONE came back on up to the stage for a raucous version of “Rainy Day Woman #12 and 35,″ to which the entire audience in the Museum sang along. I thought the place was going to explode, as artists took turns on the verses (and J.P. Harris gave his meanest Dylan impression — a damn fine one if I say so myself). What an end to an emotional, powerful, hell of a set. 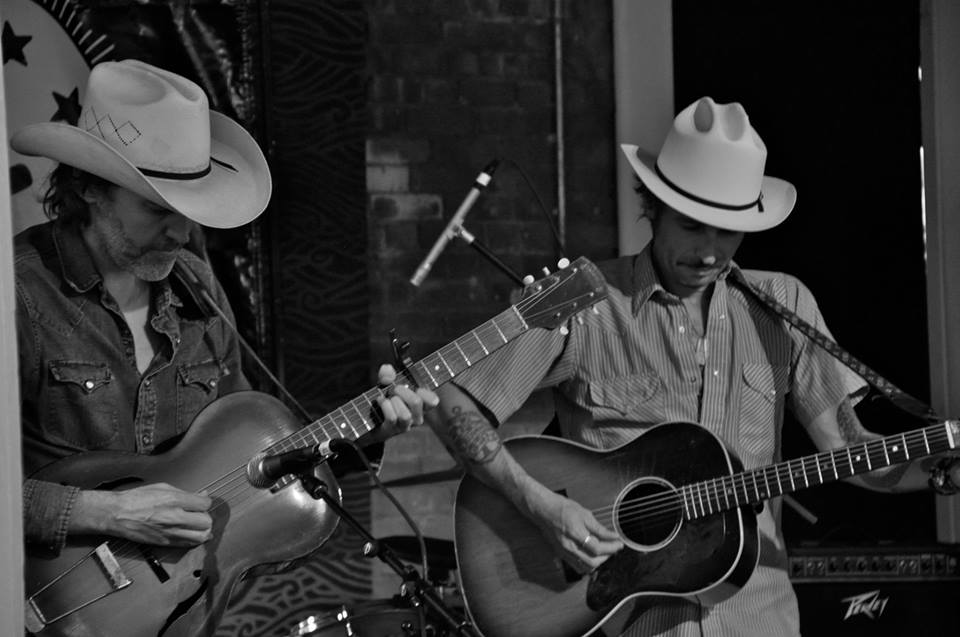 Everything about the Wildwood curated stage at Newport Folk was centered around one thing: family. There is a strong, strong pull to this community, primarily based around East Nashville for me and so many others. Occasionally we are lucky and a few outsiders are let in the door, or we get to witness what we did on Friday afternoon at Fort Adams.

Libby Rose and Jesse Collier did an absolutely flawless and astounding job in curating a host of musicians that didn’t just play music that gets you moving a bit, but was a diverse arrangement of songwriters that can tug at your heartstrings just as easily as they can shred a country lick and make you two-step all the way across the Newport Harbor.

To begin his set, Joe Fletcher said something along the lines of, “Does anyone else feel like they are floating?” I can’t speak for others in the room, but I tell you one thing: this guy right here, his feet still haven’t hit the ground. To Libby, Jesse, all the artists, and the folks at NFF who allowed them to bring this absolutely beautiful event to the Fort: ‘Thank you’ doesn’t begin to live up to what I you all deserve, but I guess it’s a start. Let’s do it again real soon.