A classic debate that runs across many genres of music concerns whether artists should perform originals or covers. It’s a question of entertainment value versus artistic integrity, and one that each performer must answer individually.

From the entertainment point of view, covers can be great crowd pleasers. Fans like the familiar, and there’s often a sweet spot where an artist can impose his unique style on a well-known song to great effect.

On the other hand, a performer who relies too heavily on covers may find it difficult to ever establish himself as an original artist. Covers cast a long shadow and can make it harder for creative types to find acceptance should they eventually decide they’d prefer performing their own material.

Most performers start out as better musicians than writers. These days you see incredibly talented kids singing and playing, though it’s uncommon for youngsters to have the inclination or life experience to be decent writers. So there’s absolutely nothing wrong with covering other artists while you’re developing your own style and learning the craft.

Young performers who cover multiple artists will fare better than those who cover several songs by the same stars. Your voice may be perfectly suited to copy a certain singer, or a band’s material may be in the wheelhouse of your playing style. But be careful, and seek a variety of artists to cover. You don’t want to be typecast as someone with limited range.

For many artists–quite probably a majority–writing originals is more challenging than performing music. Even the famously lucrative team of Jagger/Richards had to be forced into songwriting by their manager Andrew Oldham, who locked them in a kitchen and wouldn’t let them out until they wrote a song (their first, “As Tears Go By”).

Reluctant writers might abandon the effort too quickly, frustrated by less-than-perfect results. Here’s the thing though: Writing, like most skills, is usually a matter of persistence and effort. It has a lot less to do with inspiration, though those who work hard at it are sometimes graced with brilliant ideas for melodies, lyrics and stories.

Ultimately, the greatest musical rewards result from being original. As a path to happiness, writing is often therapeutic and a means to cope with or even solve life’s problems. And financially, even the best-paying gigs may not equal publishing and licensing royalties in the long run.

Still, there’s a lot to be said for performing covers. Interpreting others’ material can also be transcendent. An artist like Joe Cocker made a career of it, and the great Frank Sinatra said a performer doing someone else’s song had to “make it his own.” If you have those rare, special gifts that only a tiny percentage of performers possess, then by all means don’t worry about writing your own material.

For the majority, though, it’s important to strike a balance between entertainment value and artistic integrity when considering whether to perform originals or covers.

Ted Slowik has more than 30 years experience as a writer/editor, musician and publicist for professional entertainers. Learn more at TedSlowikMusic.com. 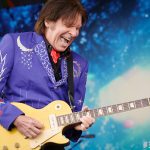