Where Is Bluegrass Headed?

This question popped up on my Facebook feed on Monday morning: “In your opinion, is bluegrass music on the decline, or it it growing? And what will it be like in 20 years??” The writer, in his explanation, went on to say, “I live in southern Ohio, born and raised … When I was growing up in the late 70s and 80s, there were always plenty of places to go to hear and play bluegrass music. Open jam sessions every weekend somewhere close … Not any more … There are a few pickers still around but very few shows to go see and very seldom an open jam session around these parts … There are a few festivals around but they’re not like they used to be with very limited jammin! When you do find a jam, it’s usually some young kids that are only “practicing” and it usually doesn’t resemble traditional bluegrass … It’s DEFINITELY on the decline in these parts!”

Bluegrass music, as we know it, emerged on Dec. 8, 1945, when Earl Scruggs and Lester Flatt first appeared with Bill Monroe & his Blue Grass Boys (a specific reference to the bluegrass state, Kentucky) to wild excitement from the audience. No other genre I’m aware of can claim such a specific birth date. Two years later, Flatt & Scruggs broke away from Monroe and formed the Foggy Mountain Boys, performing together for 22 years, with a groundbreaking performance in Carnegie Hall in the 1960s. You can get a flavor for the origins and early years of bluegrass by watching this video containing clips of the first bluegrass festival in Fincastle, Virginia, over Labor Day weekend in 1965.

Today I’ll focus on three major events that helped to change the course of bluegrass music:

Commercial recording: The first recording sessions of country music held in Bristol, Virginia, in 1927 by Ralph Peer represented the effort of RCA to broaden the sales of its newly popular record players to ever wider audiences. To do so, they had to develop a market and respond to its demands for new, different, and intriguing sounds. Soon, with the increasing urbanization and industrialization of America, the music had to respond in some way to competing sounds and musical influences. From the beginning, country, and its younger cousin, bluegrass, first took advantage of the new opportunities, and then responded to the sounds on record and broadcast, always needing to develop new material to sell more recordings and seek higher ratings.

Flat-picked guitar: The development of the flat-picked lead guitar in bluegrass, as best exemplified by Tony Rice, led to inevitable changes in bluegrass. Today, almost every bluegrass band has a skilled flat-picker who traces his or her skills back to Rice, who emerged from his California base to anchor J.D. Crowe & the New South as well as the Bluegrass Album Band, which sought to revive traditional bluegrass. The difference can be seen in performances of the Jimmy Martin song “Freeborn Man,” as performed first by Martin, and then by Rice, who firmly established the style. The emergence of Rebecca Frazier and, recently, Molly Tuttle show the importance of this addition and the change it has wrought.

Bluegrass goes to college: Bluegrass and traditional Appalachian music have become the subject of academic study and performance in colleges and universities during the past couple of decades. There are well-established programs at East Tennessee State University, Berklee College of Music, Davidson College, Morehead State University, and several others. From those, established bands and award-winning players have begun to emerge in both traditional and progressive bluegrass music, and bluegrass has changed as a result of the study and attention paid and the students who, in the past, may have moved directly from home to the road.

In 1986 legendary banjo master Alan Munde joined the bluegrass and country music program at South Plains College in Levelland, Texas, which had been founded in 1975, teaching there for 20 years while continuing to play and record. There have been many graduates from this program, including Stuart Duncan, Mike Bub, Jeremy Garrett, Nolan Lawrence, Mark Cassidy, Ron Block, Ashley Brown, Lee Ann Womack, and Natalie Maines, as well as less well-known musicians. Among the list above are a musicians who have ranged from traditional bluegrass to very experimental, as well as Nashville session players. Munde commented that they took students where they were, introduced them to bluegrass instruments, and encouraged them to develop in their own directions. He said that serious students in the program often find their way back to the origins and traditions of the music as they forge new paths. A recent recording by the Hillbenders, which includes two graduates of the South Plains program, suggests the possibilities with their recent full performance of the Who’s classic rock opera Tommy for bluegrass band.

So people clinging to memories of the gauzy, warm past of the 1940s and ’50s, an era where the fault lines in our society were carefully covered over, will see the music to be in decline. Others will find joy in the changes that newer bands represent. This all sounds a little like the schism wrenching other parts of our society apart. But maybe bluegrass will be more successful in finding common ground, in making and keeping relative peace. In a sense the line is drawn between Berklee and Morehead State. But we all can be winners if we learn to celebrate bluegrass in its traditional and progressive forms as well as those musicians who, nurtured in bluegrass, have left to find success in other forms of music. Meanwhile, we honor the honesty and expression that shines through bluegrass music of all eras to represent the answers to the eternal question, “What is bluegrass, anyway?”

Next week, as spring signals the beginning of bluegrass season across the country, I’ll look at bluegrass festivals, where they are, and how they’ve both retarded and encouraged change through the years. 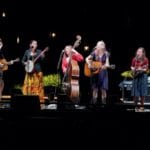 THROUGH THE LENS: IBMA’s World of Bluegrass Goes, Well, Like Everything Else, Virtual 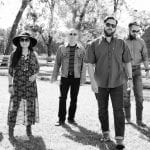 Writing About Bluegrass Royalty, Warts and All