Where Are All the Protest Songs? Long Time Passing…

Earlier this week, I went to see the epically enraging documentary film, Inside Job, which details the recent financial collapse. (I know, I know. This is supposed to be a music blog… I’m heading there, I promise.) At periods in my life, I have been a fairly obsessive political junkie, watching cable news, C-Span, and PBS; reading newspapers, blogs, and magazines; and listening to innumerable podcasts and radio programs. Over the past year or more, I have worked to find more balance in my life. I’ve tried to stay aware of the world around me but have pulled back from the daily minutia of political events (and especially the hyper-partisan non-events masqueraded as “news” by demagogues of all political stripes.) I’ve tried to replace part of the time I used to devote to politics listening to, playing, and writing about music. I have to guess that my blood pressure has happily lowered at the same time my outlook on life has climbed in a more positive direction.

Seeing Inside Job brought all of that lurking desperate rage back to the surface, however, which is not wholly unwanted given the enormity of the corruption explored in the film. Make no mistake, this is definitely not a partisan rant a la Michael Moore or Glenn Beck. It is not especially ideological, either. It spends as much time skewering Democrats as it does Republicans, pointing an angry finger at Presidents from Reagan to Obama and the many Congressional enablers throughout the past three decades. Most importantly, it paints a devastating portrait in clearly reasoned detail of a political, cultural, and academic system wholly owned and operated by economic elites, serving their interests at the grave expense of the remaining ninety-nine percent of the population. Which led me to think as I left the theater, where is the backlash from today’s artists and musicians? Specifically, where is the protest music which, in bygone eras, helped to galvanize dissent, spotlight injustice, and spur community action? 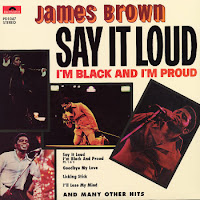 The civil rights movement produced enduring tunes like Dylan’s “Blowin’ in the Wind” and “Only a Pawn in Their Game,” “We Shall Overcome” popularized by Pete Seeger, Billie Holiday’s “Strange Fruit,” James Brown’s black power anthems, and countless others. The Vietnam War produced hundreds of classic protest songs; I bet most readers can name five within thirty seconds right now. The FBI considered John Lennon’s anti-war activity dangerous enough to monitor him during Nixon’s 1972 re-election campaign (but, to be fair, who didn’t Nixon monitor?)

The 70’s and 80’s ushered in an era of aggressive punk, hard core, ska, and new wave in reaction to the earnest, idealistic, and furry long-hairs of the previous generation. Bands ranging from the Clash to Bad Brains to the Dead Kennedys to Fugazi schooled a generation of misfit youths in provocative political ideas with aggressive anthems and an unmasked rage. The cultural significance of punk was considerably less pronounced than the counter culture of the preceding decades but was meaningful and influential nonetheless.

The 80’s and 90’s produced an explosion of hip-hop detailing the stunted failures of the civil rights movement to fully address race relations, inner-city poverty, and urban crime. Artists like Public Enemy and KRS-One provided dense sociological dissertations atop heavy bass beats and emphatic samples (often re-purposing the soul, R&B, and funk protest anthems from previous generations.) Admittedly, much of the genre glorified hustling, drug-dealing, misogyny, and violence. Even amidst its worst excesses, however, much of this sensationalized “inner-city journalism” also exposed innumerable suburbanites like myself to problems and ideas that were theretofore invisible from the vantage point of our relatively safe and affluent white enclaves. Whether seen as positive or destructive on balance, one cannot deny hip-hop’s cultural impact. Which leads me again to ask, where are the musicians impacting culture today in a serious political or sociological way?

Sure, there have been a few overtly political musicians over the past fifteen years or so. Ani DiFranco, Rage Against the Machine, Michael Franti & Spearhead come to mind (despite my personal lack of interest in their music.) And Bono’s jet setting with political leaders has likely resulted in some serious money and awareness raised, though his “catch more flies with honey than vinegar” posture in no way inspires widespread dissent even among U2 fans. Some might point to Green Day’s Grammy-winning “pop-punk” (a paradox if ever there was one) American Idiot as evidence of politically meaningful music, but their stage adaptation of that album, including high-dollar Broadway ticket prices for affluent urbanites, makes such an argument laughable. These endeavors feel more like Political Awareness as a branded consumer product than anything approaching lasting cultural effect. And, yes, there are excellent musicians today crafting deeply poetic songs of significance, humor, and eloquence exploring social and political themes. I recently wrote a quick post-election piece listing a few of them.

However, let’s face it, even a wealth of great contemporary music has no structure to generate widespread coalescence around any movement, idea, or agenda. Frankly, I see little desire among musicians (or maybe fans) for such a structure. Where is the massive protest concert on the national mall or, better yet, the gilded blocks of Wall Street? Is a mealy-mouthed faux “demonstration” by two gifted political satirists the best this generation can muster? Really? Irony as protest? I find that heartbreaking, and I can’t help but feel we’re getting exactly what we deserve as a society when we can only muster a weak moan of discontent while our economic masters gleefully sodomize us with diamond encrusted plungers. Ok, the blood pressure has spiked again. Let me dial back a moment. 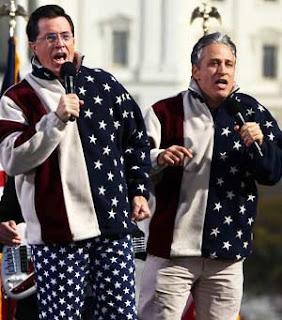 Maybe I’m confusing cause and effect, chickens and eggs? Was the protest music of the 60’s & 70’s the result of a politically aware movement much more than a significant causal agent for such a movement? Or maybe I’m simply being unreasonably nostalgic for a phenomenon that is no longer relevant. Is the idea of music having a substantial political effect on culture a passé idea in the age of the internet, a potentially more effective means of mobilizing ideas and social change? I’m not so sure…

While the internet allows the exchange of ideas, it also leads to the splintering of issues into tiny self-contained agendas rather than broad-based, big tent activism. It also lures people like myself into thinking that clicking a mouse, sharing a snarky facebook post, or writing a blog post about protest music from the comfort of my home is equivalent to boots on the ground political action. In reality, I don’t think it is. I’m pretty sure that all of those billionaires and their lobbyists documented in Inside Job are burning some serious shoe leather in the streets of Washington and halls of Congress. As I comfortably type these angry words, they are busy figuring out how to monetize them through online advertising. I have to believe that I would have a much more profound impact by singing the protest songs of this generation on the Capitol steps with thousands of other assertive citizens. So, let me know when you find those songs and round up the musicians to lead them; I’ve got some online petitions to sign in the meantime.