Delta Moon has taken the last couple weeks off before we head up the coast in a few days for a short tour of the Northeast. Among other things, I’ve been doing a lot of reading lately, mostly about music and musicians. I’d like to share with you today a few of the passages that have resonated with me.

First, here’s a gem from Bluegrass Bluesmanby Josh Graves. Through his work in the 1950s and 1960s with Flatt and Scruggs, Graves established the Dobro in bluegrass music, bringing with him a heavy blues influence. Lightning Hopkins once said, “I like Grave. He plays dirty.” In this memoir, edited by Fred Bartenstein, Graves says, “Old guys like Lightning Hopkins and Son House used a bottleneck and an old guitar. Their singing and picking shows they came up hard. You watch them on the stage. A blues man will get to just a certain note, and you can tell by the way his head moves what he’s doing. He shakes his head and closes them eyes, and you can tell exactly which way he’s going. Everybody else that’s tried to learn that instrument has tried to play the notes.”

For several years now Mark and I have talked about how certain notes, depending on the key and scale, sound sweeter when you place the slide not directly over the fret but a shade off one way or the other. It’s a subtle thing, but I think that’s part of what gives Delta Moon a distinctive sound. I’ve talked with some classically trained string players and learned it’s something they are aware of too, especially in a string quartet. A violist recommended How Equal Temperament Ruined Harmony (and Why You Should Care)by Ross W. Duffin. In that book I found some encouragement from Pablo Casals: “Do not be afraid to be out of tune with the piano. It is the piano that is out of tune.”

Though I appreciate what he’s saying, with all respect, Casals goes a little far. If there’s a piano in the mix, I feel it’s important to play to it and not against it. There are few things I find more unbearable than a band with one member who keeps trying to prove he’s hipper than the rest. You just want to slap him.

Keith Richards’ Life knocked around the house for months before I finally cracked it. Then I couldn’t put it down. On the page as well as the stage Keith has a unique, entertaining voice, and the book rings true, except for the continuing bits about “faulty wiring” as the reason why houses and hotel rooms keep burning around him. Keith has this to say about recording: “If you have it all separated, it’s insipid. What you’re looking for is power and force, without volume – an inner power. A way to bring together what everybody in that room is doing and make one sound. So it’s not two guitars, piano, bass and drums, it’s one thing, it’s not five. You’re there to create one thing.” 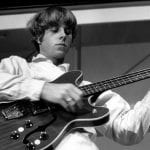