Yesterday on Facebook, my friend No Depression posted the usual ” it’s #twangthursday what are you listening to ” post. It seems to capture a lot of interest and I like to see what people come back with ’cause sometimes I find some new things that I missed or old stuff I just forgot about. (Four “I’s” in one sentence…wish I had an editor.)

Many people each week say that they are listening to Gram Parsons, and I guess Neil Young, Steve Earle and Gillian Welch also pop up quite a bit. Others offer up some version of an Uncle Tupelo derivative. And there are those that relish the obscure and send us running off to Amazon for research. Don’t think anyone’s yet mentioned that they are listening to the new Dylan Christmas album , but the season is just starting I guess.

So back to yesterday. I was listening to a track from the Youngblood’s “Earth Music” and somehow it started me thinking about other early-Americana artists which led me to the Lovin’ Spoonful who I’ve always loved from their first time on Ed Sullivan’s Sunday night show. Trouble with working from home and having three monitors in front of your face and two computers on the desk is that it’s pretty easy to get sidetracked, and sure enough I start surfing all over the place and getting an idea that maybe we need to talk about this sixties band again. If the search engine here is correct, there was only one small blip about the band in issue 41 in 2002 which was a reissue review.

A quick Google took me to their site and of course I don’t know what I was expecting to see, but it was another sad story of a great band without their marquee iconic members who are still touring in small casinos in small towns across the country and being just another sound-alike tribute band peddling memories to the old folks. And I mean no disrespect to the two original guys in the band and the third who’s been with them for almost forty years, because at least their still out there making good music and trying to earn a dime like the rest of us. But without singer-songwriter John Sebastian and guitarist Zal Yanovsky, their just not the same band etched in my mind.

So with some sadness, I turned away from that idea and went searching for John Sebastian…Zal passed away in 2002 having spent years running a couple of restaurants in Ontario. I’ve been tracking Sebastian for years as he went back to his early roots of jug band music and blues. Living not far from Woodstock, he still plays and records, lately (and separately) with Maria Muldaur and David Grisman. He also does commercial work with jingles and such…Coke, Pepsi, Kohls and Gatorade are a few.

Last year at the Temecula Valley Film and Music Festival I got to see Chasin’ Gus’ Ghost, which according to the website is described as “a documentary film on the history of Jug Band Music. It traces the roots of American music beginning with Gus Cannon and Cannon’s Jug Stompers, The Memphis Jug Band and the Dixieland Jug Blowers from the 1920’s, and weaves a tapestry through interviews, live performances, archival footage, and photographs showing their influence on the ever-popular folk and rock movements of the 1960’s.”

Sebastian is all over the film along with many other names you’d know if you recall the early folk scene and like that type of music. His playing of both guitar and harp are probably the best they’ve even been, as is his voice. The best part of the film is when the band he plays with travels to a jug band music festival in Japan, where it’s been embraced and is loved.

This morning as I started to hack away, I got sidetracked in research and I’ve decided to perhaps come back to Sebastian at another time…and with a more in depth retrospective. Because, while searching around for some information on Greenwich Village where he grew up and started his career, I stumbled upon a release that’s a tribute to the neighborhood. It came out a couple weeks ago and I’m not even going to bother to mention the name or artists on it…you reviewers can do that. But it made me think about tribute albums in general…something I know a thing or two about as I used to have a hand in that business.

So here it is….tribute releases can take many forms and some are done lovingly with care and quality, some have great archival value and fan appeal, some are recorded for five hundred bucks in a bedroom and some are just plain commercial rip-offs. If there’s any reason to rejoice at the collapse of the music business, it’s that we may never again have to see a kazoo tribute to REO Speedwagon at a Tower store. Not that this thing about the Village was like that…there’s a Lucinda track I didn’t seem to have on there that’s pretty good. But there was a cover version of John Sebastian’s Darlin’ Be Home Soon by a talented artist who just hacked it to death.

And it was enough to take me off topic and wonder…what’s the point? 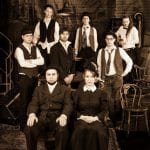