I’m starting to wonder if there is a connection between me leaving town and the upward mobility at my place of employment.   I’ve been planning for Wakarusa for almost two months, meanwhile applying for higher paying job opportunities at my job.  Today I got a call, “Ryan this is Tina, we’ve set up an interview with you for Friday, June 3rd.”   I promptly told Tina I would be in Arkansas listening to mind boggling bands having the time of my life, and that I couldn’t be bothered with a pesky raise and or promotion.  To which Tina promptly pretended to have forgotten I was scheduled off for that day.  Two months ago, Tina did this exact same thing when I went to Chicago for a wedding.

I just got off the phone with Holly Garman, a wonderful woman and PR personnel for, Hoots and Hellmouth.  We set up an interview for June 2nd, and I am so excited I literally almost crapped my pants.  It was either the excitement or the Panda Express I had twenty minutes ago.  What? I’m busy, I don’t have time to eat healthy.  Either way, my stomach is boiling with anticipation for Wakarusa and for the opportunity to talk with famous people.   At first I was concerned I would be star struck and stand in front of band members with my pen shoved up my nose, but when I received Sean Hoots cell phone number and it wasn’t surrounded in glitter, it hit me that these are people with cell phones just like me.  Except they are just really talented people.  By the way, I spent about twenty minutes trying to find out what Sean’s last name was before realizing that it was Hoots.  Which means one of two things, I’m daft or google needs better key word searching tools.

I’m looking forward to seeing as many bands as possible, My Morning Jacket, Sharon Jones and the Dap-Kings, Grace Potter, Tievery Corporation, Minus the Bear, and Those Darlins are but a few on the long list to see.  I’ve made it a point to listen to at least two songs by every band playing at Waka, “a tall order” as Holly Garman said.   Holly’s right.  It was a tall order.  But I did it and now I’m overwhelmed, I’m working on dwindling my list of bands to see to a more reasonable schedule, allotting myself breaks for things like, eating, drinking, sleeping, and maybe some bathroom time.   Chances are though, my schedual will fall flat on it’s face and be forgotten when I get there and move with the flow of the festival.  Nobody ever wrote anything worth reading on a strict schedule.  Except for maybe the authors who’ve been published…okay, maybe I’ll adhere to a loose schedule.

I’m leaving tomorrow at 8am, so I can get there and set up my tent; which honestly will probably take all of 5 hours, and get familiar with the stages.  My friend who I was planning on taking with me decided to invite like two hundred people to camp on my camping pass for free without telling me.  It didn’t feel right so I told her to go fuck herself.  I’m not a saint, in fact, I’m probably the first one in a riot to start breaking windows and looting, but I will not nor have I ever, bit off  a hand that feeds me.   So now I’m going on this adventure alone and I’m terrified.  I keep thinking about that scene in the movie Deliverance, where Ned Beatty gets raped in the woods by a mongoloid toothless hillbilly.   I don’t think my friend would have offered any real help if that situation were to occur on our Wakarusa trip, but at least she’d be there to hold my hand as I waddled back to the tent.

But everyone tells me Wakarusa is a fun festival that invites people who are of the understanding that it is a fun festival, and that kind of stuff stays out.  I’m feeling more optimistic after talking to my roomate.  “Ryan, You have the best adventures when you are alone.”  She’s right.  I do. 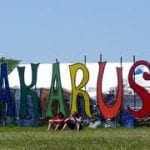