Brooklyn’s Uncle Leon and the Alibis album Wild Ways is like a late night stumble and tumble into the last neon sign lit smokey bar open way past last call, deliriously bleary eyed you find a seat in the corner next to a lady named Big  Maybelle order a beer and a shot, glance leeringly at Maybelle and toast ‘Fuck It’  then the music catchs your attention and coming over old tube amps, loud and raunchous, Uncle Leon and the Alibis  are playing their unique brand of whiskey fused, roadhouse honky tonk, capturing your mood completely ‘whiskey, women, pills and booze still can’t kill these lonsome blues’, their in your head man what are they doing in your head? You look around and everyone’s a bipping and bopping to the music, they’re in everyone’s head man, your eyes clear a bit, you sing along a few verses and in a minute your foot stomping and hootin’ and a hollerin’ with the crowd. Fuck the world!

The Uncles got the vocal chords of nashvilles greats piped straight from his gut, backed by musicians that sound like they’ve played on every Sun session ever recorded. Essential listening for every roots revival enthusiast. Rating: Four Levi Buttons
Recorded entirely on vintage analog equipment, straight to 2″ tape and mastered by Joe Lambert at Brooklyn’s JLM Sound, 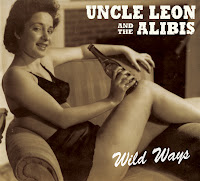 All My Crazy Friends Got Old and Lame
Don’t Blame This Guitar
Cold Dark Night
Fuck the World
It Ain’t That Easy
Hold On
Loving a Cowboy.mp3
The Cheatin’ Kind
Whiskey and Weed and Big-Titted Women
Wild Ways

Listen and Purchase on the website  Give a like of Facebook, Follow on Twitter
Bio:
Previously, Uncle Leon and the Alibis have released two “quick-n-dirty” self-produced studio albums: “Drunk” and “Roller Derby Saved My Soul”, as well as the 2010 live album, “That’s My Shit!” Uncle Leon also recorded a limited-edition vinyl single, “The Bartender”, for Metropolicana Records in Scotland.

Two of the band’s songs, “Big Idea” and “Drugstore Roses”, appeared in the independent feature film “My Best Day”, which debuted at the Sundance Film Festival in 2012. The song “Roller Derby Saved My Soul” has been featured in two Australian documentaries—ABC TV’s “Roller Derby Dolls”, and “This is Roller Derby”—and continues to show up in various fan-created YouTube videos. The song has also inspired a theatrical stage play, a few serious essays, and at least one tattoo.

Locally, they’ve had the pleasure of opening for several notable indie-roots characters, including The Legendary Shack Shakers, Joe Buck, and Eddie Spaghetti of the Supersuckers. Uncle Leon is also the founder of the website Brooklyn Country.

Fueled by a boozy mix of classic honky-tonk, high-energy garage-punk, and good old-fashioned filthy talk, Uncle Leon and the Alibis seem determined to drag modern “Roots” music, kicking and screaming, back to the gritty back roads it grew up on.
0
Shares