No Depression community member Tom Webber has been working on a documentary “Troubadour Blues” for several years now. He’s on the home stretch and needs to complete the project. Here’s a link to the Kickstarter campaign to help support the project.

On a highway not far from where you live, a solitary musician with a guitar and a box of CDs is driving to another gig. No tour bus, no band, no road manager, no crew: just a need to make music and a bag full of songs based on hard-lived experience. That night, in a bar or coffeehouse or church basement or living room, the troubadour will create magic, sharing those songs with a room full of people. For awhile, time will stand still. Then a round of goodbyes, a night in a spare bedroom or a cheap motel, and it’s time for another drive to another town and another room.

Troubadour Blues is the story of these modern-day wandering minstrels who ply their trade outside the media spotlight and far from the glitzy world of pop stardom. They are modern-day equivalents of the medieval troubadours who brought the news from village to village, the broadside balladeers who sang about epic battles and public hangings, the itinerant bluesmen and folksingers who hopped freight trains and hitched rides across Depression-era America.

Today, this way of life is threatened. Live music venues are closing, or turning to dance music, karaoke or cover bands. People don’t go out as much; they get their entertainment delivered to them by Internet and cable. When they do go out, they don’t spend as much money. And they certainly aren’t spending their money on records; CD sales are at their lowest point since the ’70s. Many troubadours worry out loud about the future of their craft; they are running harder and faster just to stand still.

Troubadour Blues is intended to expose these great musicians to a larger audience, and to make up for the lack of attention paid to independent artists by mainstream media. With your support, I can complete the film and take it out on the road for a series of intimate screenings all over the country — building an audience the way that troubadours do, one town at a time.

This is where your money will be going:

When I set out to make a documentary about traveling singer-songwriters, I simply thought that it was a story that needed to be heard. Nearly 10 years later, my primary goal remains the same: to ensure that this compelling story reaches as wide an audience as possible.

Music has been a central part of my life since childhood. Although I grew up in a classically oriented household, the music that spoke to my heart was more rough-hewn: Marty Robbins, Johnny Cash, Hank Williams. Later, I was blown away by the Beatles, learned the blues from the Rolling Stones, traced their roots back to black American blues and soul. Later, I immersed myself in folk and bluegrass, had a long romance with reggae, then gravitated back to rock & roll.

In the tradition of music films like Don’t Look Back and Heartworn Highways, I took a fly-on-the-wall approach to filming Troubadour Blues. Peter Case, Chris Smither, Mary Gauthier, and the other artists in the film are gifted storytellers, and the best thing a filmmaker can do is to try to stay out of their way. I shot by available light, captured performances from an ordinary audience seat, and conducted interviews in comfortable settings. The troubadours tell their own stories, without narration.

I want the audience to engage with these artists as I did, seeing them on a stage and then gradually getting to know them. As Francis Coppola has observed, technology has taken the professionalism out of movie making, freeing filmmakers to tell smaller and more personal stories. Troubadour Blues is one of those stories. 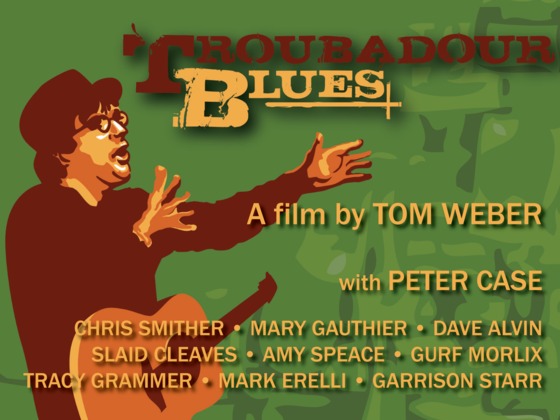