Trampled By Turtles kicked off their CD release of Stars and Satellites on April 10th with a promotion aimed to please loyal fans who pre-ordered the CD (and live near enough Minneapolis to enjoy the treat), as well as those who were willing to stand in line in order to purchase the CD at Electric Fetus; in order to earn a wristband given out by the band to attend a small intimate show at the 7th Street Entry on Tuesday evening. Only 150 people secured a spot via waiting in line–and several people spent the night, albeit a chilly Minnesota spring one. For those who pre-ordered and had all weekend to enjoy the new CD, they breezed up to the pre-order line and whisked up a wristband in record time at the fetus. Only 50 available pre-order wristbands were available.

The show at 7th Street Entry opened with the band Crimes, who amped up the audience’s emotions and prepped them for the lyrically stringed Trampled. With the intimate setting, it was a pleasure to feel so near to the band and get a close up view of the strings getting ripped up, and the emotion dripping off the faces on stage.

Trampled, true to many of their CD release shows, played through the new album in order and in entirety, before moving on to other crowd pleasers such as Wait So Long and Victory. This is fun for us nuttier nerd type-folk who geek out on order of progression as we methodically record each song lyric into our brains, and note each beat. The passion behind many of the songs echoed the love themes from previous albums, more notoriously, Palomino. Songs which saink us melancholy types, love-lost types, and believers in soul-mate types, included: High Water, Widower’s Heart, The Calm and the Crying Wind
, and Beautiful. Widower’s Heart is one of those songs to wonder about the story behind the song, and lament in the depth of loss, whether it was a tangible one, or a metaphorical one; as the loss of love echoes in the hearts of those who have walked that particular road. The emotion and depth of the lyrics would be empty without the strings to match, particularly Ryan’s wailing on the fiddle which brings a haunting resonance to the lyrics. Alongside Ryan, Erik Berry reverberated the emotion through the mandolins haunting cry.

It seems the band has only grown tighter through their tours, as us Duluthian’s can still remember the early years, and our love of certain covers. The breadth of songwriting and musical composition of Trampled By Turtles seems to be aging like a fine wine.

First Avenue’s show was sold out, and the crowd was ready to get down. Opening up was, The United States, who foretold a synergy of musical delight. This band is worth getting to know, as their adeptness at syncopation, strong bass player and drum kit, are easily capable of headlining their own First Avenue Show. Little by little Trampled came out as “friends” of The United States, and Erik Koskinen even came out to play his lap steel guitar, and then mysteriously disappeared. I guess as a fan, I was hoping he would play the tune he co-wrote and played on in the studio recording of Stars and Satellites, Sorry.

When on stage some antics were under way, namely Minneapolis Mayor Ryback, and Duluth’s Mayor Ness, who declared a Trampled By Turtle’s Day in Duluth. It seems like things are happening in the burnt up town now. The Mayor’s proceeded to crowd surf.

They opened with Midnight on the Interstate, and the fans were so pre-pumped, they went wild. Then they played Walt Whitman, brought it up a notch with Risk, soothed us with Widower’s Heart, and surprised the crowd switching gears into Victory. They played an interesting set-list, and definitely made it worth it, as they played each song off of the new album, and sprinkled in a few favorites, such as Codeine and Help You (a personal favorite). Of course everyone went wild when Alone was played, but I suppose it must be played as it was the pre-pre-release song from the album, with the most widespread connection to listeners. This is where they closed and then came back out to play, The Calm and The Crying Wind, and then it was refreshing for them to play Erik Berry’s song, New Son/Burnt Iron, as they don’t always play it, yet it has such a melodic introduction, and tapers into an intensity, as a song it seems to elucidate the mixed emotions and feelings with the experience of having your first child. To top it all off they ended on a Pixies song, Where is my mind? This derived a lot of pleasure from many in the crowd, including myself. Seemingly, when TBT plays a cover, it is a definitive ending point. As a fan, these are some of the songs which excite me the most. When an Americana/bluegrass/rock band can take a song such as the Pixies, make their own, and have it still recognized, while perhaps even re-instating it as their own, is an art in itself.

Now the Turtles are off on their tour for the new album, and in all likelihood, gaining more popularity. As a fan, I wonder if there will come a time it becomes too expensive to see the Homegrown band anymore, or simply too large of a venue to get me out. In the meantime, they take the country by storm, and we eagerly look forward to their return of their emotional verve. 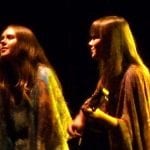