Top Ten Albums From The Golden Age of UK Psychedelia

We’ve dusted off our tie-dye flares, set our alarm clocks to 25 o’clock and altered our consciousness to bring you our run down of the Top ten UK albums from the golden age of psychedelia(1967-1968).  Our writer Garry Todd, who has also compiled this excellent Top Ten Albums from the Golden Age of Folk Music article for us, has delved deep into the heart of this magical era. Please be aware that this is a UK acts only list,  so as wonderous as America’s The 13th Floor Elevators and Brazil’s Os Mutantes were they will not feature on this list. So sit back, grab a kaftan, turn on your lava lamp and brace yourself for the trip of your life-time (or just your tea time, if time is tight).

Often overlooked and derided as a half baked mess, this self-produced Stones album was made during a year of famous drug busts and a loss of innocence, which led to cynicism and self-loathing for Jagger and Richards further along the line. However, Their Satanic Majesties Request is a much better album than many recognise as the Stones try to jam out of their blues box and succeed at most times in getting airborne. Most of the usual psychedelic signifiers are there, mellotron, harpsichord, leslie speakers, phasing, backwards tracking, flanging, all expanding the Stones sound beyond their hitherto basic blues rock. Between the jams come tidy pop-psych pearl drops ‘She’s a Rainbow’ and Garage-Psych rocker ‘Citadel’. A transitional album that swept the stage clean for their next classic run of albums up to Exile on Main Street. It was to be the only time they self-produced an album during their career, though. 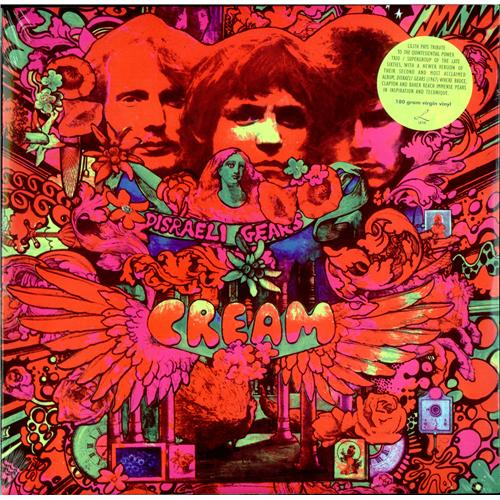 Each member of Cream was a virtuoso performer and sometimes that led them up very bad paths, such as ten minute drum solos, but when they kept their egos under control they were a band of freakish power. For a famously expansive live band, on Disraeli Gears Cream keep their prolix tendencies contained with nearly all tracks being around the three minute mark. Following the appearance of The Jimi Hendrix Experience on the London scene Cream’s guitarist Eric Clapton had to work very hard to regain his ground as ‘god’. He almost made it with this album; check the tasty wah-wah on Tales of Brave Ulysses for example. This album also features iconic psychedelic cover art, with Clapton in full white afro Hendrix worship mode. 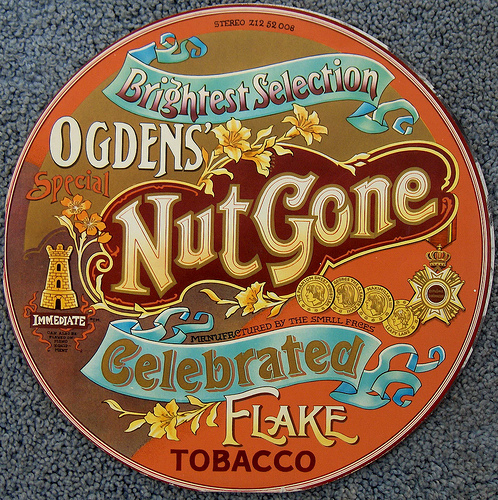 The Small Faces had come up through the mod scene but were pop tarts through and through. A band renowned for their chemical appetites in all their incarnations they were early and enthusiastic adopters of psychedelic substances but maintained a knack for writing catchy pop tunes about waiting for their dealer to deliver more speed. Ogdens Nut Gone Flake came in a fantastic novelty package which was a fourfold round reproduction of a tobacco tin and the novelty aspect wasn’t limited to the packaging, the second side of the album was ostensibly a song suite telling the story of Happiness Stan and narrated by ‘Professor’ Stanley Unwin (noted speaker of gobbledygook). Despite these handicaps to be taken seriously the album as a whole adds some serious groove and soul to the psychedelic equation. Coming from the mod scene, there’s a great deal of soul jazz chops underpinning the psychedelic phasing and jiggery pokery of the top end.  Add to this Steve Marriott’s rock soul vocals and Ronnie Lane’s tender lyricism and you have a pop-psych classic that went on to influence Blur amongst others. 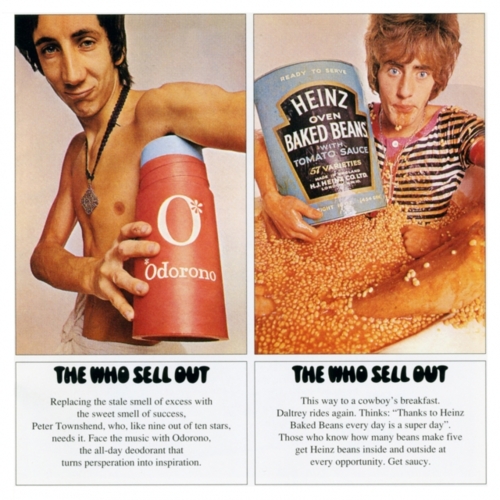 The Who were another mod band which seized on the new sound and possibilities offered up by expanding studio technology in 1967. Pete Townshend was always looking for a manifesto or movement to hang his colours from and Sell Out was a perfect pop package, from the cover to the false radio idents between tracks. Opening with ‘Armenia City in The Sky’ the scene is set with a psychedelic showcase for Townshend’s guitar playing with phasing, panning and backwards effects all being deployed. Lyrical matter stretches from rites of passage to ESP. The album ends with ‘Rael’, a long form episodic run through of some of the music which would end up on Tommy. 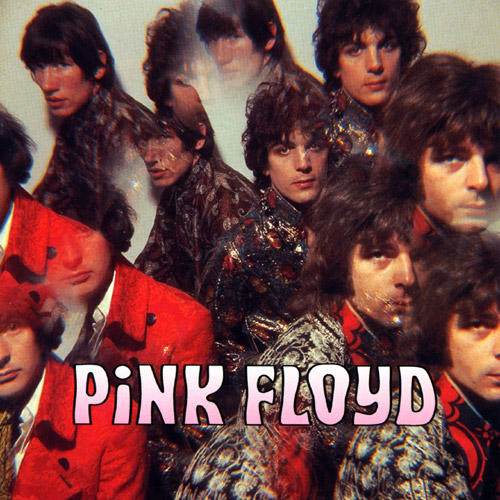 Pink Floyd were a hard working R’n’B dance band on the London scene for couple of years before they got into the studio as their improvising edge honed at the epicentre of the British psychedelic scene Joe Boyd’s UFO club. Getting signed to EMI gave them access to Abbey Road and its engineers fresh from working with The Beatles. The result was an astounding debut album, Barrett’s lyrics are full of imagistic poetry and the music has a potent chaotic rush enhanced by production effects. 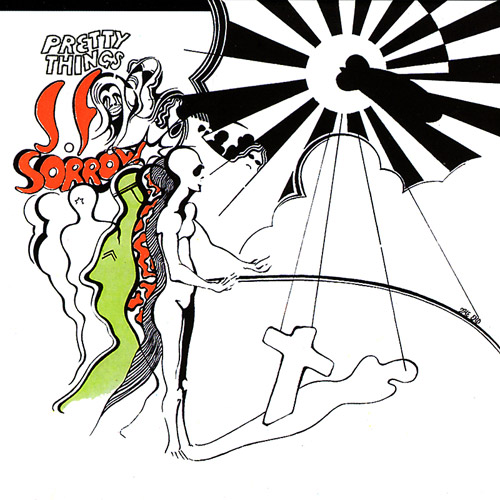 A concept album song based on a short story by lead singer Phil May should be an instant turn off to anyone who missed the sixties, however, the tenuous linking story does not detract from this amazing unsung album.  The Pretty Things were contemporaries of The Rolling Stone on the London blues scene and their guitarist Dick Taylor had once been in an early line up of The Rolling Stones. Working with producer Norman Smith after he had produced Pink Floyd’s Piper at The Gates of Dawn they took the psychedelic sound and turned it up, applying a similar hard blues edge as Hendrix and Cream. S. F. Sorrow should have been a massive hit but was out of time being released at the end of 1968. The summer of love was long over and it was too soon for prog. Led Zeppelin released their first album the next year and became the biggest band in the world with a pretty similar sound. 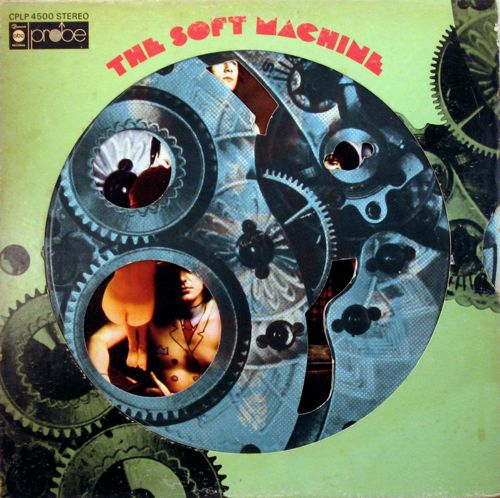 Possibly the most free form and psychedelic album ever made during the first flush of psychedelia. Being electric organ led their sound was characterized by the hectic overloaded throb of fuzz. Fat basslines, throbbing organ and jazzy drumming accompanied lyrics about consciousness raising, if written by Kevin Ayers, or being short, if written by Robert Wyatt. Soft Machine were mostly about the music, however, and lyrics and song really took a backseat to jamming. No ordinary noodling though as the attack each member brought to any of the songs on this album sets it apart from the run of the mill psych-pop cluttering the charts in 1968. Must be listened to at maximum volume. 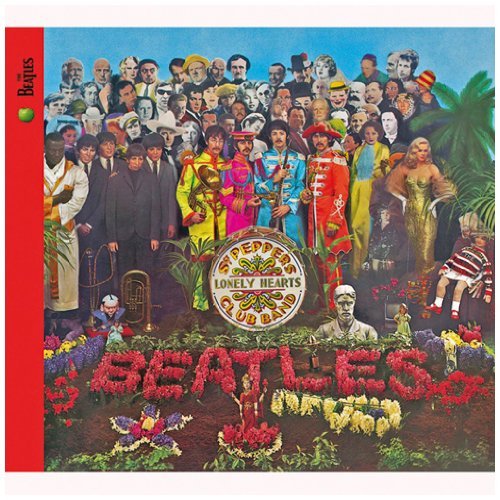 The beginning of the end for The Beatles was a landmark recording in so many ways it obscured the music until recently. The Beatles stole the glitter from all over the mid sixties scene and made it their own. It draws from pop, music hall, rock, soul, indian classical music, sound collage, chamber music, swing, and throws in the kitchen sink. Binding such as disparate mixture together is the combined genius of The Beatles, George Martin and assorted EMI studio engineers who took then current studio technology to its limit and beyond. All the hallmarks of psychedelic production are there, phasing, reverb, panning, leslie speakers, guitar feedback, flanging and varispeeding but deployed in service of the songs. 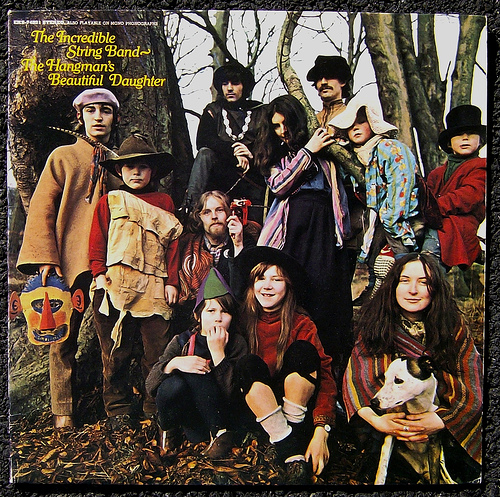 The ISB had already taken folk psychedelic with their 1967 album The 5000 Spirits or the layers of an onion, but now moved even further out, with wildly allusive lyrics which draw from Greek Mythology, Indian Vedic poetry, Bahamian popular folk song and the folk traditions of every nation of the UK. Regarding the music it’s difficult to pin down as it’s no longer recognisably of any one tradition, mostly acoustic, the arrangements usually centre on a drone, and are then ornamented by layers of exotic instrumentation. Robin Williamson alone is credited as performing on twelve different instruments. One of the most singular albums of any era. 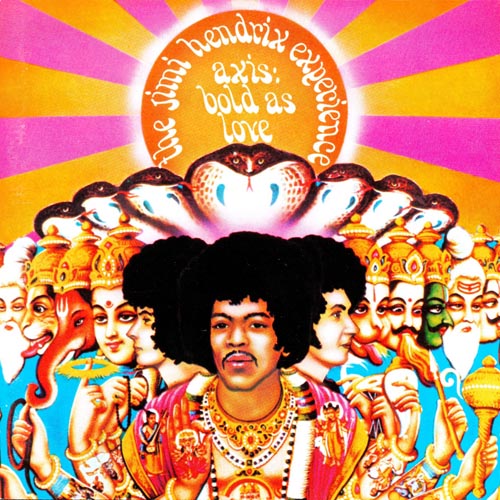 Axis was the second Hendrix album of 1967. No psychedelic slouch Jimi followed his debut with a record which went one louder. Hendrix had come up with ‘the slow motion speeded up sound that sometimes cut so deep’ and was developing as a lyricist in thrall to Bob Dylan. An album which commences with an alien visitation and ends up tripping out on love after calling in on rage, hopelessness, magic and more on the way. Radical uncertainty and ego loss never sounded as cool before.

Compiled and written by Garry Todd

THE READING ROOM: Biography Peers at the Man Behind Guitar God Clapton