To Barack Obama, From Pieta Brown

I’ve been a fan of Pieta Brown since her first album and in the past year it seems as though she has just really started to spread her wings. In addition to doing a lot of touring in support of last year’s Mercury release, she has been showing off her photography (including doing the cover art for dad’s wife Iris DeMent’s new album), painting with watercolors, finding time to write and record a song with Joey Burns for the latest Calexico album Algiers, contributing a new song to the Iowa City Music Project which will release a two disc set in November and includes music by her dad Greg, husband Bo Ramsey, William Elliott Whitmore, Rene Hell, Caroline Smith, The Poison Control Center, Wet Hair, and many more…and now today, I heard about a song she wrote to Obama.

Here is the story, the song and the lyrics directly from Pieta:

Recently I was invited to play at a democratic rally in my home state of Iowa…in a barn a ways outside of a small town about a mile from the Mississippi River.  A few days before the show I sat down with my guitar…wondering in the back of my mind what songs I might sing at a political rally…and wondering too, if I had anything to say to anyone about politics and the upcoming election.

Like many people, I was affected and moved by many of President Obama’s speeches and his hopeful message during the election of 2008.  And I have remained an Obama supporter.  It is hard to imagine taking on that job in these times…any times for that matter!

Meanwhile, though I think forward can be a positive message, one thing I have missed during the current election, in the midst of all the political banter and noise is the simple message of hope…followed by peace, and love, which all feel to me, no matter how simple or idealistic, absolutely necessary.  So, the other afternoon, sitting with my guitar, I began to wonder what message I might actually try to share with President Obama. This little song tumbled out.

A couple days later I made a lo-fi demo in my kitchen and sent it directly to my friend David Mansfield (who had been working with me on some other tracks!)  He added his beautiful musical voice…guitar, bass and mandolin…and sent it right back. Thank you David!

Last night as I was getting the song ready to offer for a last little shout out before the election, I caught Obama’s appearance on Letterman.  I was moved again. I appreciated his sentiments about democrats and republicans finding ways to work together. And as Obama made his comment about all the single mothers (and so many others) working so hard, I felt that maybe my message had already been received?!

To Believe (~song for Obama)

I’ve been hearing all the political noise
I’ve seen your pretty smile, and your fancy toys
I don’t know what you’ve got up your sleeve
But I know you’re asking me

Out here by the railroad tracks
We’ve got right and wrong, good and bad, red, yellow, white and black
Can you see me? I’m down on my knees
Kissing the sky…cause I

My mamma, she works so hard
So many times doing so much more than her part
Up with the sun, home with the eve
Against the odds, with no time for greed…she taught me 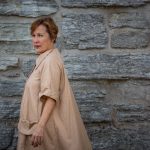 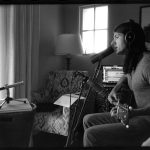