Concert review of the Drive-By Truckers, April 7, Lee’s Palace, Toronto, and a mini review of their new album The Big To-Do. 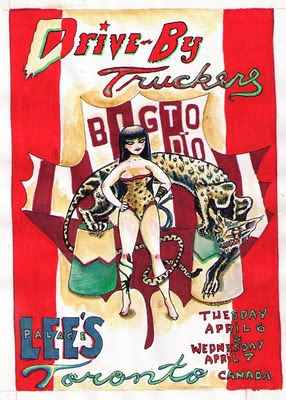 I got out of work late on Wednesday night. I missed the Drive-By Truckers in-store at Sonic Boom. I missed the opening act, Langhorne Slim, but I heard that he and his band were fantastic. It was pouring rain and super humid, and when I walked into Lee’s Palace at 10:05 pm, the place stunk like a mens’ locker room. Nasty. Just what you would expect from hard-rocking Drive-By Truckers fans.

The Truckers were on tour in support of their latest album, The Big To-Do, which was released three weeks prior to this show. I admit to being initially underwhelmed by The Big To-Do. The Truckers are usually master storytellers, and some of their best songs leave you aching for the protagonist. For example, in “Sink Hole,” from the superb Decoration Day (2003)

, you feel real empathy for the man who is about to lose his family farm due to loan defaults. But, like my buddy Cowbelle said, I have a real hard time feeling anything towards any of the characters in the new songs. Take “That Wig He Made Her Wear” and “Birthday Boy” written by Patterson Hood and Mike Cooley, respectively. “Wig” tells the story of a woman who murders her abusive preacher husband, while “Birthday” describes the life of a down-and-out stripper. I just can’t root for either of these characters. For “Wig” you would think that a high end divorce lawyer would be a lot easier than murder, and I feel like telling the stripper in “Birthday” to quit bitching, we all have shitty jobs, sister.

Some of the Truckers’ best songs are written from the first person perspective: “Nine Bullets,” “One of These Days,” “Lookout Mountain,” “Zip City,” “Women Without Whiskey,” “Let There Be Rock,” “Marry Me,” “Sink Hole,” “Puttin’ People on the Moon,” “Where the Devil Don’t Stay,” “Gravity’s Gone,” “Self Destructive Zones,” “That Man I Shot.” God damn the Truckers have a lot of good songs! Not all, but some of the songs on The Big To-Do are written in the third person. I would love to hear these stories told in the first person. What is the father’s perspective on “Daddy Learned to Fly?” What is Lester thinking in “Drag the Lake Charlie?” I would LOVE for Hood to re-write “That Wig He Made Her Wear” from the wife’s eyes. In fact, I will issue what the French call un challenge: write “The Wig He Made Me Wear.” Make me care about what this women went through in her terrible marriage.

Back to the show. The DBTs mixed in 11 of 14 tracks from The Big To-Do with 10 classic Truckers songs. Given that the new album had only been out three weeks, and that most fans at the show had presumably not downloaded a leaked copy (cough, cough), the audience for the most part was more staid than at previous DBT shows. Of course everyone was singing along and going crazy for the older songs, and a handful of people were doing the same for the new tracks. But even if you don’t know the music, you can’t deny that the Truckers are amazing musicians who put on one hell of a show. I would watch this band do yacht rock covers. Actually, that’s a really good idea!

Cooley got everyone to dance when he said, “Let’s boogie-woogie” and launched into “Get Downtown.” This song also featured a killer keyboard solo by Jay Gonzalez, and a bad-ass guitar solo by John Neff. I love that the band added rock keyboard to their sound. Keyboards are massively underrated in rock and roll, and Gonzalez adds another thick layer to the Truckers sound. And what can I say about John Neff that hasn’t already been said? This guy is a master at stringed instruments, be it various guitars, pedal steel, or mini-sitar. I suspect that the man can play the fiddle too.

The encore started out slowly and softly with “The Flying Wallendas.” But the band turned it up several notches for the next four tracks, with Hood even altering the lyrics to “Let There Be Rock” by adding, “I never saw The Clash but I sure saw Bruce Springsteen and the E Street Band…” At one point Hood thanked the crowd and said something like, “I’m 46 years old and I have two small children and I can’t thank you enough for all of my good fortune.” It blows me away that Hood is 46 and can rock harder that those little emo punk fuckers half of his age.

Finally, the DBTs blew the fucking roof off of the place with a cover of Neil Young’s “Rocking in the Free World” with Cooley and Hood exchanging verses. I knew exactly that was coming when they hit the first chord. Ho-Lee-Shit. Face melted and mind blown.

I have to admit that I like The Big To-Do more now since I have seen the band preform it live. I may even care a little more about the characters in the songs. A little.

One of my favorite parts of the Truckers catalog is the artwork by Wes Freed. Freed has done the art for all of the album covers since Southern Rock Opera (2002), and did the killer Canadian tour artwork above which I now have hanging in my living room. The liner notes of The Big To-Do are covered in beautiful circus themed drawings/paintings by Freed. I always buy the albums of the bands that I love, regardless if my initial response to the music is less than stellar, especially when I know the artwork alone will be worth the price of the album. In this case, after seeing most of The Big To-Do live, I am reassessing my first impression.