This City Will Never Drown: a review of Ben de la Cour’s “To the River Rise”

from: Turstyled and Junkpiled
With his second album, “To The River Rise,” singer/songwriter Ben de la Cour proves that New Orleans was and always will be a refuge for the musically inclined.
Ben de la Cour bleeds the songs he sings. With his second album, To The River Rise, this Brooklyn native and metal band veteran has opted for the solo route and made New Orleans his home. And like many before him (Paul Westerberg and A.A. Bondy come to mind), de la Cour has left the noise rock behind, to bring songwriting front and center.
To the River Rise is an emotionally driven record. The lyrics (deeply personal and recounting tales of years on the road), are delivered in a fragile tone, as if the lightest breeze could topple the words. The bare bones instrumentation, consisting of understated acoustic guitar and the occasional fuzzed-out electric or mandolin, bring de la Cour’s voice front and center.  With a phrasing style reminiscent of Joni Michell and the delivery of a young Bruce Cockburn, To The River Rise unfurls a song cycle in which a mood is created not by individual tracks, but by experiencing the work as a whole.
There is an underlying sadness to the set.  Within the understated instrumentation and de la Cour’s baritone voice, lie stark, haunting songscapes: moody recollections that recount the journey of a  life that is not always pretty, but proves better than one of mundane predictability. 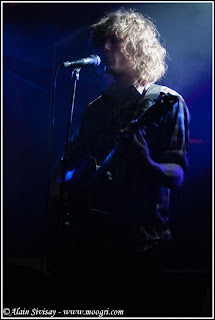