Thirty Years Later, ‘Will the Circle Be Unbroken: Volume 2’ Stands as a Musical Milestone 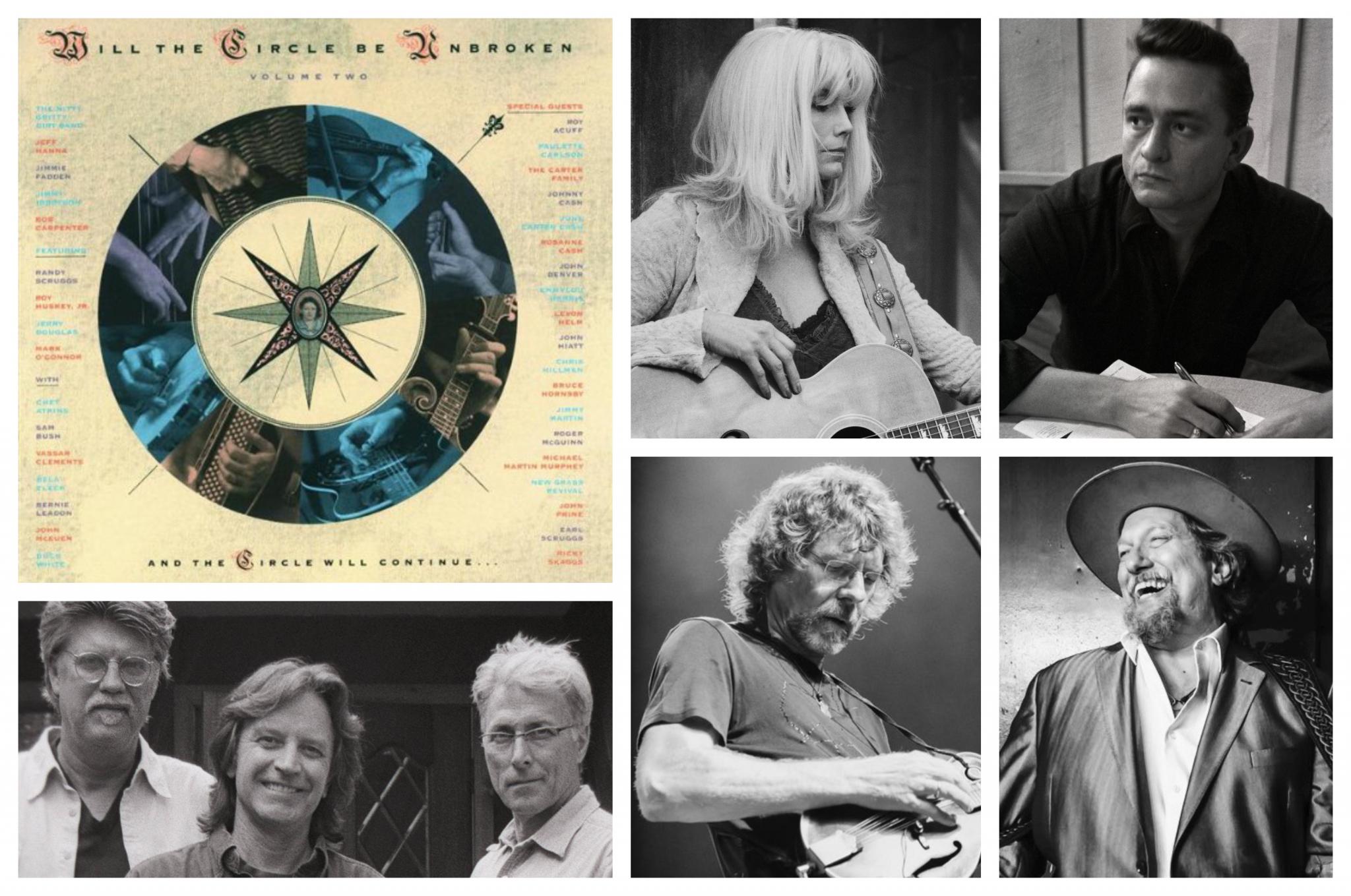 On May 1, 1989, The Nitty Gritty Dirt Band updated its ode to country music’s early influencers, 1972’s Will the Circle Be Unbroken, with an addendum co-starring some of the best available singer-songwriters and neo-traditionalists.

Thirty years later, Will the Circle Be Unbroken: Volume 2 sounds ahead of its time because it looked beyond genre distinctions, gathering artists based on shared passions for gospel, country, and bluegrass classics instead of Billboard chart designations — an approach that helps define roots music in the 21st century.

In the early ’70s, The Nitty Gritty Dirt Band played country-rock, inspired by the same troubadour romanticism that elevated Jackson Browne and The Eagles to household names. Somehow, holdovers of the hippie generation convinced Roy Acuff, The Carter Family, Merle Travis, and others in a business that still frowned on men having long hair to participate in the first Circle album. These unlikely collaborations introduced country legends to a broader audience and inspired the young bluegrass pickers and folk singers featured on the album’s sequel.

Seventeen years after its breakthrough album, the Dirt Band inhabited a much different place in popular music. It followed such like-minded groups as Alabama to the country charts, enjoying a run of 16 straight top 20 singles between 1983 and 1988. The triumphs since 1972 of singer-songwriters like John Denver and such neo-traditionalists as Randy Travis further obliterated the genre and generational gaps challenged by the first Circle album, making the concept less radical and more commercially palpable.

Because of changing times in which the good fight for old-time music had been won and rock-and-roll outsiders were the new country stars, the Nitty Gritty Dirt Band — then consisting of guitarist Jeff Hanna, mandolin player Jimmy Ibbotson, drummer Jimmie Fadden, and piano and accordion player Bob Carpenter — wasn’t initially sold on reviving the Circle project.

“Jimmy Ibbotson and I, and I think Fadden too, kind of resisted the idea of doing a sequel to the first record because we felt like it was a freestanding project,” says Hanna. “We kind of made that statement. But little by little … we had a great manager named Chuck Morris who was our second manager. He said, ‘ … Country music has changed, and this next generation of guys has come up that’s sort of in the position that you guys were in back in ’71 as far as having these folks that they revered.’ Because now, all of a sudden, we weren’t exactly the elder statesmen, but we were all in our late 30s, early 40s. We were still like, ‘Yeah, I don’t know.’”

It took prodding from one of the first Circle album’s famous families for the band to concede to Morris’ advice.

“So we’re on the road touring in Europe with the Johnny Cash Show, and June Carter Cash would come into our dressing rooms on a fairly regular basis just to say hello,” Hanna says. “She was a real sweetheart. We’d reminisce about Mother Maybelle. She said, ‘You know, Mama just loved you boys. She called you them Dirty boys.’ That was her nickname. She’d tell us these stories, and it was great. One night, she said, ‘If y’all ever consider doing another Circle record, John and I want to be on it.’ That was like, ‘Well, if Johnny Cash wants to do it, let’s just do it.’ That was the tipping point to want to go in and do a second record.”

Like most well-aged country albums, Will the Circle Be Unbroken: Volume 2’s sustained appeal comes in part from a stacked crew of session musicians capable of seamlessly transitioning from interpreting old bluegrass standards to cutting fresher singer-songwriter fare.

“On that second record, having Jerry (Douglas) and Mark (O’Connor) and Randy (Scruggs) and Roy (Huskey Jr.) in there, they’d play stuff and we’d all just go, ‘Man, where did that come from? That is so cool,’” Hanna says. “They were great. Jerry and I talked about this a lot, but he and Sam (Bush) and the guys in New Grass Revival who we’d became friends with very early on were fans of the first record. They were a few years younger. They were like our little brothers, basically.”

Surely, there are dozens of stories to be told about the various tracks, including a Grammy-winning bluegrass revision of Hornsby’s 1988 rock hit “The Valley Road,” but Hanna seems especially proud of the Hillman and McGuinn reunion and how it helped right a past wrong.

“We did ‘You Ain’t Going Nowhere,’ which famously they wouldn’t play on country radio when The Byrds recorded it on Sweetheart of the Rodeo,” he says. “They played the Opry, and I think they got booed. Different times, right? We re-recorded the song with Chris and Roger and it became a top 10 country single, which we were very proud of the fact of some redemption for those guys.”

Arbitrary differences aside, these artists and others gathered to celebrate the memory of Mother Maybelle and the like while reviving the fading practices of front porch bluegrass jams and living room song-swapping.

“We wanted to kind of pull the curtain back a bit,” Hanna says. “We live in a culture now where the guitar pull and the songwriter round are sort of part of what we do. For years, people didn’t see that in clubs or theaters. It all happened in people’s houses. Late at night, get a bottle of wine out and start passing around something that you lit, and guys would do these song swaps.”

Earl Scruggs’ son Randy kept this inter-genre parade of pickers and singers organized and on-schedule. The producer and guitarist followed a pre-set template he witnessed firsthand while playing with his father on the first Circle album.

“The importance of Randy Scruggs can’t be overstated,” says Sam Bush, one of the album’s mandolin players and a guest vocalist (“Don’t You Hear Jerusalem Moan”). “Randy brought a calming influence to the session. It was as if nothing was a big deal and nothing was going to go wrong. Maybe that’s the way the Scruggs family approached music. If you can play, you’re going to be alright. Randy was a guiding force and the great equalizer in the room. Let’s face it, with the Dirt Band you have a band that’s been around at that point for I don’t know how long. An established brotherhood of musicians, but there can be disagreements or you get stuck on something. That’s where the producer can step in, referee, and take it back to fun.”

“We did Jimmy’s song that morning, and then he came back and was really wanting Ricky Skaggs to sing a song with him,” dobro player Jerry Douglas says. “It was cutting into the schedule and was going to upset the timeline, so we couldn’t do it. It was funny, the part about Jimmy trying to get Ricky to sing with him, and everybody dodging Jimmy to try to stay in schedule. He was sort of like the uninvited house guest, you know, even though he’d been there earlier that morning.”

The sessions ended with a huge ensemble, featuring everyone from Acuff and his legendary sideman Bashful Brother Oswald to contemporary country stars Steve Wariner and Marty Stuart, singing along to “Will the Circle Be Unbroken.” This joining of voices in a song of praise sounds like one of those Bill Gaither Homecoming infomercials from back when Vestal Goodman, J.D. Sumner, and other Southern gospel legends still lived.

For the artists involved, this gathering of multigenerational talent felt like old-home week. Bush knew pretty much everyone there from session work and New Grass Revival tours, except for one particularly terrifying guest.

“Johnny Cash was probably the only person I didn’t really know in the room,” he adds. “I was too in awe to try to talk to Johnny Cash. I was a little bit in awe of him. I think we all were. Of course we were. It’s a respectful thing we got to be a part of.”

Just as the first Circle album represents a different time in musical history and a third volume, released in 2002, retreads an alternate mainstream route paved by special guests Alison Krauss and Dwight Yoakam, Circle 2 captures a snapshot of the late ’80s. After neo-traditionalists claimed the country airwaves and before Garth Brooks and his cowboy hat-wearing riding buddies elevated the genre to unseen commercial heights, the Nitty Gritty Dirt Band took a break from cutting radio hits to celebrate their foremothers and fathers while offering a wide range of artists a chance to connect with music’s past in a modern context. 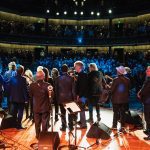