The Walcotts: A Congregation of Sinners & Saints

The L.A. Americana scene is a funky mish-mash of styles, talents and inspirations where streams of veteran celebrities casually rub shoulders with local artists in much the same way that used to occur in Greenwich Village a half a century ago.  Ask anyone on Americana evenings at The Mint, Hotel Café or the Cinema Bar and you’ll be quickly reminded at one time Woody Guthrie paid some musical dues in this town. With only a little further research you’ll find Jackson Browne and Glen Frey started writing the Eagles signature classic, “Take It Easy,” in one of the small apartments in the Echo Park district of Los Angeles that sits in the shadow  Dodgers Stadium near Chavez Ravine.  When it came time for The Band to break out of the cloistered safety of their Woodstock Big Pink home, they chose Sammy Davis Jr.’s home just above the busy Sunset Strip of 1968 to record their seminal classic self-titled sophomore effort, The Band (The Brown Album). 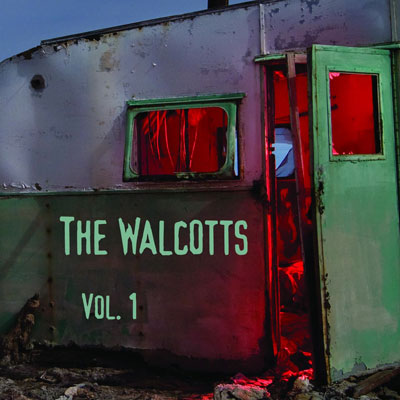 So, when first hearing The Walcotts Vol  1, a four song debut from this recently assembled L.A. band, don’t be surprised if  you hear the better angels of Los Angeles’ music history haunt these four excellent songs. Starting as a studio project initiated by L.A. musical journey man Tom Cusimano, The Walcotts V1 is a gathering of a unique musical congregation.  “We’re just a hodge-podge of musicians. There’s randomness about the sessions. There was really no master plan. We just let things flow,” muses Cusimano.  And flow they did. With studio space provided by  The Wallflowers’ Rami Jaffee,  he reached out to musician friends, “whoever happened to be in town at the time,” according to Cusimano.  Jamison Hollister became a regular on pedal steel and mandolin with Emily Alfstad contributing vocals and song collaborations.  The sessions are rounded out by Ulf Bjorlin on trombone, Erik Kertes on bass, Neil MacPherson on piano, Jim Olson on drums, Devin Shea on violin and Sasha Smith on organ and piano.

It’s precisely this random flow that brings The Walcotts its strongest appeal.  It’s the essence of true L.A. Americana music where country, blues, folk, gospel, jazz and country come together with an unforced, spontaneous and uncontrived feel.

The opening track, “It Should’ve Been Me,” comes on strong with dazzling Garth Hudson, “Rag Mama Rag,” piano riff and a  trombone part that gives that drunken-yet-sober feel many Americana studio projects reach for, but all too often miss.  If Dr. John and Tom Waits spent a night drinking together somewhere between New Orleans and Los Angles you’d get the feeling of this song. It’s an effective cross pollination of R&B, Soul and Country that calls to mind the Stage Fright sessions of The Band.  After all, their name comes from the classic Band song from the same album, “W.S. Walcott’s Travelin’ Medicine Show.”

Fortunately, the remaining tracks fulfill the promise of “It Should’ve Been Me.”  “By Morning,” continues with the same  loose, funky and jam-like feeling establishing a consistent texture to the soundscape created here.  The finest lyrical moments on the album are found  on “Instead.” It’s a song that reflects what the best of American songs are about; love lost, uncertainty and striving for the faith to endure.   The bridge of the song says it best:

Now I’ll go hours, I’ll go days Following something that might change Earn my devils and my saints Trying to explain So here I am searching night and day Holding out with all that’s left of faith Pushing hard as my senses lead the way Lord I know our home, is miles away

The success of the sound of this album depends on the successful blend of acoustic, brass and electric instruments. The mandolin rubs against the pedal steel guitar. The Trombone weaves around the acoustic piano while the organ brings in a unique gospel feel to the mix.  “Instead,” provides vocalist, Emily Alfstad, with an opportunity to duet with Cusimano. While her background vocals nicely complement Cusimano’s lead, this song gives her a chance to demonstrate the  rich character in her voice. The final track, “Staring Back,” bookends the spontaneity and appeal of “It Should’ve Been Me,” with a meditation on redemption and endurance.

The Walcotts Vol help keep the artistry and skill of The L.A. Americana scene on an upward trajectory toward national recognition.