The Vespers – A Day In The Life Of An Indie Band

I’ve developed a close relationship with the members of an independent musical band called The Vespers. These four young people, sisters Callie and Phoebe Cryar as well as brothers (not related to the sisters), Bruno and Taylor Jones , are a touring , singer-songwriter band who drive their sturdy van and trailer to venues coast to coast from their home base in Nashville, Tennessee.

Accompanying  them is Caitie Merz,  merch (merchandise) seller, roadie, and assistant to Bruno, who doubles as the band’s manager.

They were recently booked to do a gig in Webster Hall, in New York City. When they play close to my home in Jersey, my wife and I open up our home to them and let them know they are welcome to stay with us while they are in the area where we will feed and house them. When the  NYC gig came up and they asked if they could stay with us for two nights, I said of course, but texted Bruno  back to see if I could drive in with them, in the Vesper van, to get a real taste of what their touring musician life was like.  His one word text reply made my day: “Absolutely!”

We left my house about noon time as the band had a luncheon meeting with a record executive around one thirty, and the venue , Webster Hall, wanted them to set up around three in the afternoon  as the show started at 7 PM. On this tour, The Vespers were performing along with some other Nashville performers, Jillian Edwards, and a band called Caleb. Since the Vespers were going on last ,they might not be performing until after nine. So it was already apparent to me that it was going to be a long day. 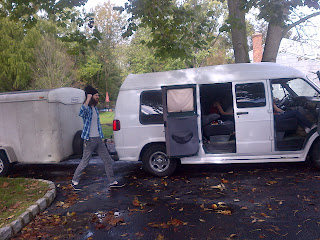 I got to ride shotgun with Bruno, who does almost all of the driving. Once we all got settled in the van , Bruno hit the go button the GPS and we were off to New York City. I soon found out that we couldn’t take the Holland Tunnel, as trailers are prohibited there…good thing Bruno was aware of the restriction. I was surprised at the lack of talking in the van as we started our journey. Everyone has an I Phone and was either emailing, phoning,tweeting, texting, web browsing or listening to music. There is a DVD player in the van, and many movies and television series have been watched by those not driving.

I asked Bruno if he listened to the radio while driving, and he said no, as he wanted to pay attention to the van’s performance at all times. As you can imagine, gasoline is a big expense, as the van gets less than 10 miles a gallon. There is talk of getting a more fuel efficient van once there are funds to do so. The van has a lot of miles on it, and there have many breakdowns along the way, but they have always occurred on a day off, and the band has never missed a gig as a result of transportation issues.

Bruno’s biggest concern today is parking, as the van with trailer takes up almost 3 parking spaces and NYC isn’t exactly an easy place to park in the first place.

We are lucky today, as traffic is pretty light this Tuesday, and by 1:30 or so we pull up to the venue which is in the East Village area of downtown Manhattan. Bruno is delighted to see that the “loading only” parking space right in front of the venue is available and he deftly maneuvers the van in the spot. He feels we will be able to leave the van there the whole day, as he is certain that the traffic enforcement types will see the trailer and not ticket us. This is a glorious start to the day! 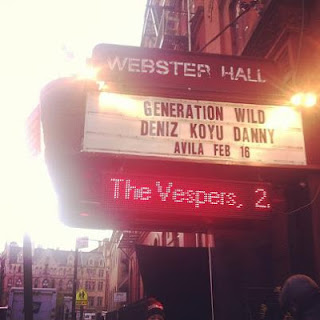 With a great parking spot secured, The Vespers headed off to lunch with the recording industry executive. Caitie and I grabbed a cup of coffee at the nearest Starbucks and then headed back to the van where we discussed the future of the world….well maybe not the world but we did cover a lot of topics. Caitie had branched out from being the merch person, and she now handles the lights and audio when no audio technician is provided by the club. On this tour, the other band, Caleb has their own audio guy and this venue has  pretty sophisticated stage lighting. So there will be a lot less gear to unload as a result.
The Vespers are at a crossroads in their life as a band. The two sisters, Callie and Phoebe, are getting married in the spring. How this will exactly affect the band is uncertain.  The touring is fun, but is tiring and can be a grind. Can they attract attention of a record label and a subsequent larger audience? They need the backing of a label to appear on the late night talk shows. and to get the radio and internet play they would need to take them to the next level. For an independent band, they have done a lot on their own, including the release of 2 albums and with the publication of  two big articles on them in the Huffington Post. But the organic growth and their own drive will only take them so far. 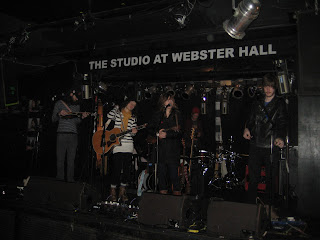 Bruno, Taylor, Callie and Phoebe return from their meeting with the record executive. He will be attending tonight’s show as he has never seen them live. His young daughter made The Vespers a cute card with some drawings representing some of their songs. While the meeting went well, no specific deal has been offered at this point. 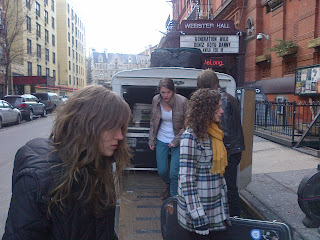 For now, the immediate concern is unloading the van and getting all the gear down the flight of stairs of Webster Hall to the stage area. There is no elevator and the venue does not provide any assistance as is the case at most shows. The Vespers have done “the load out” hundreds of times and have it down to a science. Everyone pitches in . It is really cold and rather dark in the stage area. The other band, Caleb, is also unloading, and there is a  constant flow of young people lugging equipment. instruments, and hard cases down the stairs. 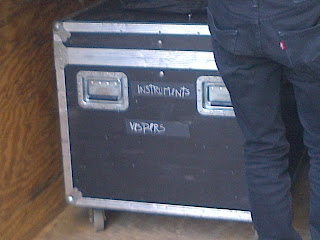 The load out is also a little easier today, because both bands are sharing a drum kit. It’s now about 4pm, and I am getting hungry, as I haven’t eaten since breakfast. The Vespers are used to it, as they rarely have three meals a day. When they first toured, they would rarely order an entree for each of them, as things were so tight financially. 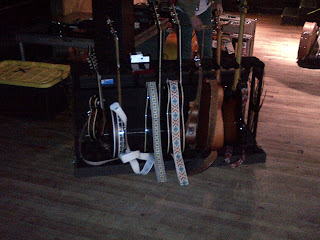 The stage is soon filled with the drum kit, various other instruments, and sound equipment of all sorts. Caleb’s sound guy begins the somewhat lengthy process of doing the sound check. He gets some info from Summer, the sound gal from Webster Hall, and then proceeds to have the Vespers play a few bars from every instrument. Once that is complete, he asks them to sing into their individual  microphones. Phoebe and Callie belt out some spiritual tunes, which sound wonderful. There’s a lot of standing and waiting as the sound check goes thru it’s arduous process.Yawns abound.

After what seems a cold eternity, the Vesper sound check is complete! A few of the band members are hungry. Taylor gets a tip on a good Thai restaurant that’s just down the street, and the six of us are on our way for some much needed sustenance. Show time is still 4 hours away!

We arrive at Spice, a Thai restaurant. During a sit down meal, the band usually turns off their smart phones and puts them into the center of the table, to ensure that everyone is paying attention. Food is quickly ordered and served. Before we eat, grace is said. Eating is an activity everyone involved enjoys and the food is often shared around the table. Tonight is no exception.
There’s no time to tarry, so we quickly walk back to Webster Hall as the doors have started to open as it’s already 6:30 PM. The Vespers announce themselves as band members so they can be let in at the stage door. 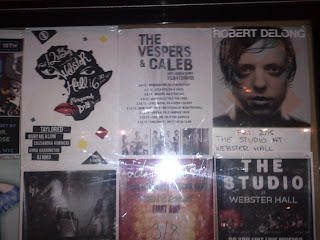 At some point, it’s made known that there are 2 other “local” acts will be performing as well tonight. This does not go over well with the group, as it means they will performing last after 4 other acts. It’s felt that the crowd will be burnt out by then. According to all, it’s best to go on second, if there are three acts, and second if there are two. Going last with a five act lineup is to avoided at all costs. But, there is no changing things at this juncture. 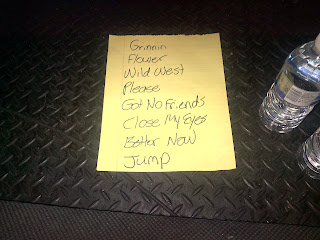 The set list of what will be played tonight is handled by Callie . Taylor used to perform this important task, but says that the band realized that Callie had the better knack for knowing what was best for the crowd and the venue. Placement of new songs is also critical.

The “dressing room” is a tiny, barely furnished room off of the stage. The only amenity provided is bottled water. Demands for M&M’s with the green ones removed  will not be honored tonight.
There’s a real camaraderie among the musical acts and they are very gracious and friendly.

The manager of the venue lets everyone know that the show will be starting 10 minutes late. A pretty good crowd has gathered by 7:15 and there’s well over a 100 people at one point. Most of them are there to see one of the local acts who has sold many tickets to their fellow students. The record company executive does show up to hear the Vespers play. By the time they do, it’s almost 10 PM and the crowd has thinned out . Undaunted by the small crowd, The Vespers give it their all. They know that there might be (and in this case is) someone in the crowd that could be an important industry type.  Just as importantly, there are some in the crowd that came just to see them. They will not be let down.

Then, in what seems like mere minutes, the Vespers are playing their last song. In what will turn out to be over a 12 hour day, the actual performance is probably a little over a half an hour. Before you know it, the load out has been started up. 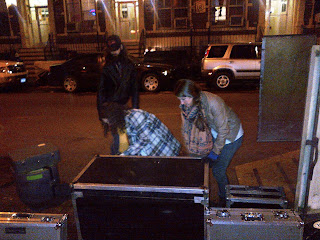 The Vespers and their partner band for this tour, Caleb, stand outside the venue, in the cold February night, say their goodbyes and wish each other a safe ride to the  venue they’ll be playing together the next night in Virginia. Everyone settles back into the van. Bruno announces the meager payout to everyone. This night’s check will cover expenses ,but not much more . There’s more talk about being the last of 5 acts to play and how that is less than ideal. Pretty soon, the chatter dies down as we head back to New Jersey.Everyone is quickly back on their smart phones.

Later that evening, The Vespers find out that the van Caleb had been driving to Philadelphia has broken down on an interstate in Philadelphia. They do not know if they will be able to make the scheduled gig or not. If they don’t what will the Vespers do without the shared drum kit that was in Caleb’s van? That’s another tale, for another day, on the road.