Once again the kind folks at WMKY have renewed my, um, contract (yeah, that’s it). And so my monthly hour-long show, listened to by an audience the counting of which does not yet oblige me to take off my socks, that deftly named monthly show called “Grant Alden’s Field Notes” airs this Friday at 7 pm, EST.

You will note that no artist whose name might be alphebetised after S is included. I’m still unpacking, after all. The challenge, just now, is that my entire art collection is leaning up against all the unpacked boxes of CDs which linger, and so nothing can move. But no matter.

Summertime. That’s the theme. Because, y’know…

Actually, because our friend Jen who grew up the next town over and sells books (from mostly independent publishers, god love ’em) to my wife, she and her husband made and fought over a disc of summertime songs a year or two back. But I couldn’t find that disc, and so I made up my own. Turned it into a radio show because that’s what I’m supposed to do.

Marty Robbins, “Summertime.” I’d thought I’d use the Janis Joplin version, partly because the man who runs the station is an even bigger Janis Joplin fan than I am. But it’s sad, that version. Then I ran onto Wayne Hancock’s old take on Mr. Gershwin, but it was a minute longer. And, frankly, Marty Robbins is a better singer.

Roger Miller, “In the Summertime.” Giddy and brief.

Eddie Cochran, “Summertime Blues.” The Blue Cheer version doesn’t fit the radio format, and I’ve only got it on a poor-quality reissue LP anyway.

Willis Alan Ramsey, “Watermelon Man.” Heh. I went to see him once. He didn’t show up.

The Monroe Brothers, “Watermelon Hangin’ on that Vine.” Because Bill Monroe’s brother, Charlie, deserves to be heard, too.

Ray Bonneville, “July Sun.” Not an artist I’ve followed, just a track I pulled as I was filing discs. I believe his new album just arrived, or maybe the photographer just sent me a screen grab of the cover. That’s it, probably. Anyhow, I shall pay better attention.

Joe Ely, “July Blues.” A lot of Texas in this. It gets hot down there, one reason I moved to Nashville (yeah, like it never gets hot there) instead of Austin. An uncharacteristically sad song from Mr. Ely.

Dave Alvin, “Fourth of July.” Which I want to be better than this version is.

Jon Dee Graham, “A Place In The Shade.” Thank you, sir.

John Fogerty, “A Hundred and Ten in the Shade.” With the Fairfield Four. Also the last review I was asked to write for Rolling Stone.

Hollywood Flames, “Strollin’ on the Beach.”

Beat Happening, “Indian Summer.” The track which started my mind down this path. Sorry.

Allison Moorer, “Easy In the Summertime.” Just a great song. Just that. 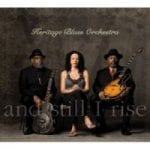 Heritage Blues Orchestra – And Still I Rise: Hear it, feel it, be a part of it.