Family. That’s something you hear a lot down in Plum Hollow. Located in Campobello, Plum Hollow was the home of Barney and Debbie Barnwell. What began as a simple gathering of friends and family in the woods became the site of possibly the most exhilarating bluegrass festival in the Southeast. After seeing the sights and hearing the music first hand, I’d have to say that’s no stretch.

Home of the Moonshiners Reunion, Plum Hollow holds something for just about everyone who loves southern culture. There’s good home cooked meals, two stages, cabins for rent during the festivals, and even a shed turned movie theater where festival-goers can watch a movie about the life and adventures of Barney Barnwell himself. To give you an idea of what the movie is like, it reminded me of the classic movie Moonrunners. If you haven’t seen that either, you’re missing out on both.

Barney Barnwell was a musician, a farmer, a moonshiner, and most importantly, a family man. His sense of family seems to have rubbed off on many of the friends he’s made over the years, which must number in the thousands. Whenever you attend the festivals, the people who work to prepare the grounds for the thousands of attendees, and the people who work during the festivities, are some of the friendliest folk you’ll ever meet. By the time you leave, you will have made many new friends. In fact, if you’re thirsty or hungry, someone has a cure for what ails you.

Speaking of food and drink, you can find your vittles at either “The Bean Pot” behind the main stage, or at Ted’s across from the main stage. Ted’s Street Foods opens early in the morning, and stays open till late afternoon or into the evening. They have plenty of eggs with sausage or bacon, gravy and toast for early morning risers. They also cook one heck of a burger and fries, hotdogs, and BBQ, among other delectables. Don’t forget to wash it down with some of their cold sweet tea. Down at the bean pot, Kathy will be cooking up a storm on a cast iron woodstove, and with a big ol’ cast iron pot over an open fire. Have a seat next to some genuine moonshine stills and get yourself some of her chicken stew, chicken and dumplings, some pintos, or whatever she might have prepared. I’ve had the pleasure of trying her cooking many times, and you’ll think your mother cooked it herself.

While eating, you can watch a movie in the movie theater under the same roof of The Bean Pot. I’ve had the pleasure of eating some of Barney’s very own pickled vegetables with Kathy’s chicken stew, and it’s top notch. If you’re planning on getting some, you’d better be quick, because even though they cook by the pound and the gallon, as soon as word gets out that it’s ready, the concert-goers descend upon The Bean Pot with ravenous abandonment. I’ve seen folks clean Kathy out in less than fifteen minutes.

There’s plenty more to see around the farm. If you feel like cruising around, meeting folks and making new friends, you can rent a golf cart for a fair price, but be sure to rent it in advance from Robert at Golf Cart Services. Just make sure you don’t drive like a maniac; there’s no sense in rushing around the farm and kicking up a bunch of dust. If you like things a little slower, you can catch a ride with Sid. He’ll pull you around on a small boat with seating for eight using his tractor, and you can putt around and leisurely take in the sights.

Up in the field near the main highway is where you’ll find the RV park. RV campers will be directed to the field by the staff. While there is currently no hookups for RVs, there are portable toilets by the main stage and elsewhere around the property, and a bathhouse complete with showers down by the small stage. If you want to use a tent, there is ample space in a larger part of the property, and space is first come, first serve, but be respectful of others’ campsites. Only one car is allowed per campsite. If you’d like, you can rent one of several rooms at the Plum Hollow Motel down in the lower part of the grounds. It consists of 11 rooms, each representing a southern state. Each room is furnished with bunks

Now we get to possibly the best part of the festivals held in Plum Hollow: the music. Whether you like bluegrass, country, or southern rock, you’re going to love what you hear. With bands such as Dosheno, Spider Farm, The Julie Brown Band, Oak Grove String Band, and Bill Noonan & the Hey Joes, to South 85, James Radford Band, The Piedmont Boys, Dirty Grass Soul, and The Plum Hollow band itself, there’s something for everyone to enjoy. The music starts Thursday afternoon and lasts until around midnight, and begins again around lunchtime on both Friday and Saturday, lasting until at least midnight.

These bands perform their craft well, and really know how to work a crowd. Playing both covers and originals, these artists interact with the audience on a personal level. If you’re lucky, you can catch some bands rehearsing acoustically, or you find a group of the sweetest folk jamming away at many a campsite. You’d be hard pressed to avoid it, so go ahead and walk up and introduce yourself. The hospitality in Plum Hollow is simply wonderful. I’ve had folks try to feed me and give me strong drink at many a campsite. Truth be told, this writer had four people ask him to eat some of their food while simply walking back to the main stage while grabbing more drinks. One man hung a plastic cup around my neck to hold my drink so I could carry my all food up the road. Thank you, sir.

Another reason people come is to sample some of the finest spirit in the world. We’re not going to go into any details, but I myself was never thirsty, and there’s no lack of variety. An art in itself, a lot of effort and love goes into making a good drink. You’ll see references to a lifestyle and culture that to this day still mystifies and intrigues people all over the world. Liquor stills that have been turned into artifacts in a living museum can be seen in multiple locations, including The Bean Pot. For obvious legal reasons, no alcohol is made, sold, or distributed in Plum Hollow, and anyone caught doing so will be banned immediately.

There are a few other rules that must be obeyed, but they are pretty much common sense. No glass, pets, fireworks, weapons, or ATVs are allowed on the property. One thing you’ll hear at the festivals is “Act like you’ve been somewhere”. In other words, have a good time, but be respectful of others and act like you’ve got some sense. Fighting is not allowed as well, and will result in immediate removal from the grounds. Security is on-duty and ready for problems at all times. With that said, you shouldn’t have any problems, and more than likely, you’ll have the time of your life here.

One more thing I must stress is how hard the volunteers and friends of Barney’s wife, Debbie, work to put on some of the best festivals around. These people work all year on the grounds, maintaining everything. In fact, because they do such a good job, you may find yourself running around comfortably the whole weekend. I know at least a few of us did the last time I made it down. There’s always someone ready to help you if you ever need something.

It’s easy to make new friends down at the Plum Hollow farm. All you have to do is walk up to someone and start talking to ’em. Before you know it, you’re either at your camp jamming along with them, or down at their camp trying some of their cooking. You’ll even see a sign which reads “Where friends become family” tack up on a tree in colorful letters. That sign’s message is one I’ve heard repeated several times. Sometimes it seems like the nicest people around all gather in just one little spot in Campobello for three days of camping, music, cooking, and good drink.

For the price of one trip to Disney World, you can attend the festivals at Plum Hollow twice in a year with money left to spare. The price of camping is included in admission, which is $30 for one day, $55 for Friday and Saturday, and $75 for all three days. It’s worth every penny, and you’re sure to get your money’s worth. For additional information, head over to the official website www.moonshiners.com or look them up on Facebook. I’ll see y’all there, until then…y’all act like you’ve been somewhere.

“General” Lee Garner is deep fried in southern culture and loves his hertiage of sweet ole Dixie Land. He is a friend, father, lead singer of The Bad Life Decisions and one of the finest fellows you will ever know. 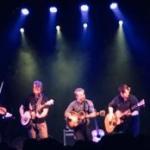 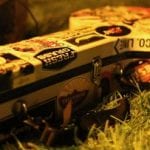