This has been a spectacular year for live music in the North East with the Evolution, Split and SummerTyne Festivals drawing huge crowds and World Class artists playing at the Sage Gateshead and the Stadium of Light, the Hoochie Coochie re-igniting the  Newcastle Soul and Jazz scenes. Plus, the Jumping Hot Club has continued to bring Americana and Roots stars from around the World to venues across Tyneside; but beavering away in the shadows has been a promoter going under the nom de plume – The Outsider.

Russell has not only given many local acts their first ‘paid gigs’ but also booked several acts that have gone on to play at the Academy later in the year.

It shames me somewhat; but this was my first visit to one of his shows and to say I was impressed would be a massive understatement.

Singer-songwriter Morris Ford from the Derwentside Delta opened the proceedings and his intricate folk songs held the sparse audience spellbound for half an hour; with several texting friends in the upstairs bar to come down to see this special talent.

Next up were Lilliput from Sunderland; well only three of them actually, as the drummer was poorly (he was replaced by a tambourine) and the bass player was on night-shift. I was impressed by their harmonies and intricate guitar playing; especially on Take Me Home; which I was assured was even better with the full band on stage. Lilliput are certainly ‘one for the future,’ especially if they get to play in a bigger venue.

There were still people queuing down the stairs as Slow Show, from Manchester took to the stage but the band politely waited until the last person crammed into the basement before actually starting.

How best to describe Slow Show? Imagine Nick Cave fronting Elbow, but with a Colliery Band in the background; it was weird, but wonderful at the same time.

Suffice to say I loved every minute they were on stage especially God Only Knows which set my hair on end and Lucky Me/Lucky You when Rob Goodwin’s rich baritone voice was layered over two intricately picked semi-acoustic guitars.

I’m assured the Outsider Presents gigs are always this good; so I for one will back in the New Year. 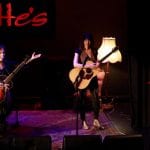 Headed Down a Southern Way: Iris DeMent Live in Australia 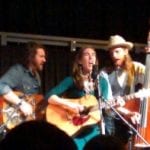