“People always say I’m the Beatle who changed the most, but really that’s what I see life is about… you have to change.”– George Harrison

This week, the company I work for announced a new product integration. Brite Revolution has served as an online music discovery and curation desintation for years, and now we’ve added an artist toolset that gives artists a clear path to actually generate revenue in multiple ways. Pretty neat, huh? It’s just one of many waves of product innovation and new thought leadership in the music business that has burst through in Nashville over the past five years.

Five years…that’s how long I have lived here. In 2007, I moved to Nashville on a wing and prayer.  I was working for a start-up company that was barely kicking, but Nashville seemed like a virtual and philosophical move in the right direction for me.  Not unlike several moments in my life, I set my sights on something with the hopes it would take me somewhere else.

Very calculating, you might say.  What I didn’t factor into my plan was my complete ignorance about what was really going on in the publishing and label world. The world that turns in Nashville became deeply affected by the state of the marketplace. Massive corporate entities were consolidating radio stations, people were stealing music, songwriters were seeing royalty checks dwindle, labels were imploding, people were getting laid off…

In short, things were f**ked up. My clever master plan? Foiled. Not so clever, eh?

When I became one of the many people who got laid off, I wasn’t entirely sure what to do next. Social media was just coming into play, and I was lucky to become an early adopter. Technology and the new social media world was changing the face of journalism, marketing, music, and the arts, so I began to seek others who had the same curiosity and passion about what I saw happening in those arenas.  My previous experience organizing community events in the film world lent itself well to getting a new digital organization off the ground, so naturally I dived right in.

Not long after I put on my “Nashville digital community organizer” hat, I had the opportunity to speak at a general assembly meeting of fellow members of the music young professional leadership group SOLID. Rick Carnes, who was then and is now, President of the Songwriters Guild of America, was the first speaker. He proceeded to tell the entire audience of music business up and comers that Music Row was dead and that it would be filled with condos in the next five years. Oh, and they were all going to lose their jobs. And did you know Google is evil? Because it is.

I got up, cleared my throat and said five magic words: “Don’t listen to that guy.”  No disrespect at all to Mr. Carnes, but I’m not a fan of treating my industry peers like fellow passengers of the Titanic.  When told “you can’t go to college”, I went and got my degree. When told to look to my left and to my right the first day of film school and that “those people won’t have jobs in this industry”, I didn’t flinch.  All I could think was “those poor bastards.”  I moved to New York with $300 in my pocket, pounded the pavement and got a job. And there are other examples of adversity in my life and hurdles I have jumped over, under, and through.  That determination and endless curiosity about what comes next and what is new has kept me afloat. Those are the very qualities that will be the core of what keeps the industry of music moving forward.

Don’t worry about me; everything turned out a-okay. I landed a job, and another job after that…and another one after that. It’s been a bumpy ride, but I am still here.

Recently, I walked through the Country Music Hall of Fame and Museum with my family. Not halfway through the first floor, I stood in front of the display about the birth of the Nashville Sound. When Elvis broke, rock n’ roll broke, and the country music world saw their fans flocking to fancy guitar riff’s and swinging hips.  In short, they were facing a crisis. What to do?

They changed. “The Nashville Sound” was born.  Nashville music producers and artists pulled together and collaborated on a sound that brought a smooth, orchestral vibe that appealed to a whole new audience.

But it’s not as easy as tweaking a tune this time. Now it’s learning about a whole new space and fashioning an appropriate business model to that space.  The new players are rising in the music industry, and they aren’t the usual suspects.  The name of the game is tech. It’s entrepreneurship. It’s innovation. It’s fan-focused. It’s interactive. It’s seeing value in data and finding new ways to generate revenue.

Nashville has changed and will continue to change. I’m proud of our musical past, but I am even prouder as a part of a collective of people and companies in the music industry that aren’t just taking the road less traveled; we are literally digging a new path. You can see it all around you, you can hear it in the air. It’s the “new” Nashville sound. 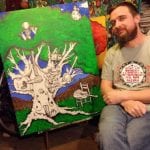 Letter To A Young Artist