The Mountains and The Trees – Music for the young at heart

I made this for you
By The Mountains and The Trees

The Mountains and the Trees is really a young musician named Jon James who hails from Newfoundland’s Atlantic coast. A talented guitar player who has been blessed with a set of pipes that would send a seraphim into a fit of pique and jealousy, James plays the kind of music I’d want my kids to listen to if they ever moved and went off to college. For The Mountains and The Trees play music for those whose ideals have yet to be tarnished by the first compromises and decisions of adult life, so sadly the sentiments expressed in many of James’ compositions often leave me in the dust.

The songs on ‘I made this for you’ are simple, true, and unembarrassed at their sincerity. James writes and performs convincing coming of age odes that look back at youthful days spent climbing trees, traveling through Europe, and grappling with the disparity between love’s first joy and inevitable anguish. “Fear of Ghosts”, “More and More” and “Sun’s Low” are all great tunes, and if I’d heard them years ago, they would have rarely left my turntable. But, as someone much closer to fifty than twenty, I feel the distance between myself and James’ sentiments, akin to the one I felt when a decade or so ago I was assigned to review a Raffi’s children’s record: the songs are great, the playing is wonderful, but they weren’t written with someone like me in mind. 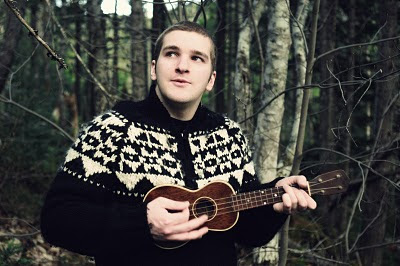 Listening to ‘I made this for you’, the sentiments behind the lyrics come to me like echoes from the distant past. It would be easy to be cynical and burst James’ bubble and bitterly assert that ‘life’s not like that! Wait until….’, but that’s hardly the point. It’s not James’ fault that I find more solace in the observations of latter day Bob Dylan and Merle Haggard than I do in the kind of semi rural Jonathon Richman observations that The Mountains and the Trees offer. Saying that, one would have to be very hard hearted indeed not to find something to enjoy on this record. The playing and singing are wonderful throughout and it’s easy to hear all of the work that went into the album’s creation. For one so young, James displays a rare sense of accomplishment and ability as he convincingly switches back and forth between guitar and a variety of other instruments to layer a state of the art modern folk pop album virtually by himself. The careful insertion of understated horns, strings and percussions into some of the tracks give this album a full and rich sound that is both invigorating and appealing.

Jon James is definitely a performer to watch. Take my reservations with a grain of salt because I hope that The Mountains and The Trees find the large audience they deserve. Recommended for the young at heart.

This posting also appears at www.restlessandreal.blogspot.com
Sign up for free updates

Narrative Arc with a Haggard Twang