There is a point, when listening to a music created with a specific vision where looking back connects us to the present and the shows us the road to the future.

The Far West, who have just released their sophomore album, Any Day Now, on the San Antonio based Medina River Records illustrates this experience. Along with L.A. singer-songwriter, Rod Melancon,  the band represent the first venture of the L.A. branch of the roots oriented record label. The Far West’s apt name may be partially due to the Texas and New England origins of its front men, Robert Black and Lee Briante respectively. But, they walk midstream in a long standing flow of California country music tradition that dates back to the days when the Okie-Dust Bowl migration first blew Woody Guthrie to California for a popular local radio show. In 1945, with his California cousin, Jack Guthrie at the helm, Guthrie would score his only charted hit song during his lifetime, “Oklahoma Hills,” as a co-writer.

Not long after the southland city of Compton would become home to Town Hall Party  which was broadcast on L.A. radio and television from 1951 until 1961. Guests included  Patsy Cline, Jerry Lee Lewis, Johnny Cash, Merle Travis, Tex Williams, Wanda Jackson and Tex Ritter.

In the 60’s with the rise of the Bakersfield sound, most of the legendary country acts would find a welcome home at North Hollywood’s Palomino, where Merle Haggard, Buck Owens and The Flying Burrito Brothers, New Riders of the Purple Sageand Willie Nelson could be found growing their music.

Today, L.A. is home to a new revival of roots country, blues and folk music in the Echo Park district, the vital Grand Ole Echo, where The Far West perform at the Echo in the spring and summer.

On their new album, Any Day Now, The Far West sound keenly aware of this tradition. They reach beyond the earlier cow-punk of the 80’s and instead draw their musical heritage from the Town Hall Party and the kind of country and rock vibe of the Palomino.

The album is a consistent collection of rockling honky-tonk, heartbreak love songs and philosophical musings of the road and the wear and tear of modern life in the Los Angeles basin. Unlike Guy Clark, they don’t take the L.A. freeway out of town, but have stayed to reclaim, re-occupy and help create new L.A. based insurgence of traditional country western music rooted in the Cosmic Country of Gram Parsons and the high energy of Richie Furay and Jim Messina’s early Poco sound. Their music is ragged and graceful, rough and always authentic because of the soul of the sound and the way they’ve re-introduced us to the well-worn southern country themes covered by the likes of Hank Williams and John Prine. They do so in a fresh and inventive way that sparks the imagination and inspires the feeling of the poetry of L.A., where so many of have brought their broken hearts as well as their hopes and dreams. It’s the kind of attraction that draws us to good music be it the early rough sound of The Flying Burrito Brothers, the ragged-edged and soulful feeling of The Drive-By Truckers or those lonesome acoustics songs from Springsteen’s Nebraska and Ghost of Tom Joad.

While this is one consistently strong album,  which creates a challenge to single out key tracks, the opening “On the Road,” returns us to the “Lost Highway” of Leon Payne’s iconic song and the internal world of Jack Kerouac’s famous novel of the same name. But, it is distinctly about Los Angeles when Briante sings, “Everyone’s chasing a ghost/everyone’s chasing a dream/everyone’s the next Monroe/ everyone’s the next James Dean.”   But, this highway goes deeper in the heart of some Doors-like dark highway, to that long dusty road we all travel alone.’  The following tracks cover Carter Family like sorrowful loves(“Walk Light On This Poor Heart of Mine”), childhood memories(“Hudson Valley” with some beautiful slide guitar), and the Tin Pan Alley jazz character-driven songs(“Leonard”). A personal favorite, “Wichita,” a story of redemption and reunion as the narrator discovers his priorities and what is best in life. They also manage to sneak into the darker and Dylanesque, “Forged in Iron,” that plays like a sequel to the Hibbings Bard’s “Cold Iron Bound.”

The production is loose and ragged in the best ways that country music can offer with raging lead and slide guitars, with a driving and pulsing rhythm section and a Dylan-in-65 organ that brings a funky kind of majesty to the proceedings. The Far West is one of a growing group of L.A. based country bands who understand the origins of their inspiration in both the California terrain and the American landscape that leads them down that lonesome road, like so many before them. As the title of the album suggests, the highway they find themselves on also presents the young band with a future and a sense of anticipation freedom present by a new vision, similar to the kind captured in the past when Dylan and the Band sang, “any day now, I shall be released,” in the foundation laying time of Woodstock and the Basement Tapes. 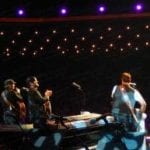 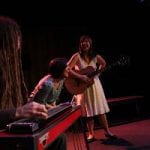