The Lonesome Trio Regaled Us with Story and Song

As soon as Club Passim added a late show for The Lonesome Trio, I jumped on a ticket (I already had plans to see another show that conflicted with their early show). I saw this band at the Newport Folk Festival last summer and knew they are good musicians who are not merely trading on Ed Helms’ name.

Yes, that Ed Helms, the one from The Office and The Hangover films.

Most people had not seen the band perform, including the people with whom I shared a table, so there was much excitement in the room before the show started. As the band came to the stage, I felt the buzz.

Ed Helms on guitar as well as mandolin (he also plays banjo, although I have not seen him do so since I saw him at the 50th anniversary celebration for Preservation Hall Jazz Band at Carnegie Hall), Ian Riggs on upright bass, and Jacob Tilove on mandolin as well as guitar, with all three singing, comprise The Lonesome Trio. The three met at Oberlin College over twenty years ago and have been making music since then.

Their music is kinda sorta bluegrass; the band’s Facebook page describes the genre as ‘kinda lonesome’. The roots are definitely bluegrass but they have morphed the traditional into a fresh new perspective that is quite listenable. They recently released their debut self-titled album and performed most if not all the songs from it.

The songs that stuck with me are ‘Appalachia Apologia’ and ‘Rising Tide of Love’; the latter song in particular highlights their excellent harmonies. Their songs contain clever lyrics which I especially appreciate because so many songs being written today (not by the artists I tend to see) are insipid.

As one might expect, there was much funny banter emanating from the stage. Their chemistry is natural and does not seem forced or rehearsed. The joking ranged from free-form word associations to meeting at a hacky-sack game. Ed is not the only comedian in the band!

Late in the show, Ian entertained us by doing some beatbox! I did not expect that and it was well-received by the audience. Someone who saw both shows told me the shows were very different, with the late show being looser; I am glad I saw the late show because it was an interesting contrast with the Newport show I saw last year.

After their two-song encore, they did a short meet-and-greet. I chatted with them a bit, and left the show feeling that I met some gracious men who deserve to have their music taken seriously.

Click here to see photos of this show on Suze Reviews the Blues. 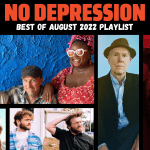 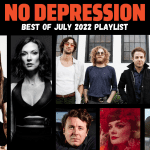