Whether you like The Lone Bellow or not, you can’t deny that they put their heart and soul into playing live. As it happens, I like them very much.

I, like many here, bought their debut album online, and it still hasn’t been released in this country. I heard of them through NPR, when they posted a link to a fantastic video for ‘Two Sides of Lonely‘. I immediately sought out more information about the band, bought the album and really liked it. For a quick look I recommend their NPR Tiny Desk Concert.

I was surprised that they toured England before the album was released, though I was pleased that they played at Sage Gateshead as it is a great venue, with fantastic sound.

Live, the band were more energetic and louder than I expected. There were quieter moments too when they performed off mic as a trio for a handful of tunes.

The vocals, backing vocals and playing of the main trio of Brian Elmquist (guitar and vocals), Zach Williams (vocals and guitar) and Kanene Pipkin (vocals and mandolin) were filled with energy and passion. I enjoyed the louder, rockier moments of their set that included a Brian Elmquist-penned rock ‘n roll song where he riffed away like Josh Homme. It was during these moments that Zach became a cheerleader, getting the crowd involved with clapping and singing along.

Overall, I preferred the quieter moments where they performed off mic, including another Elmquist-penned song ‘Watch Over Us’, a great cover of ‘Slip Slidin’ Away’ that Kanene sang lead vocals on, and other songs from their album. I especially liked ‘Two Sides of Lonely’, ‘Tree to Grow’ and ‘You Never Need Nobody’.

The band genuinely seemed surprised that so many people turned out to see them play considering that they haven’t released their album yet, and they were genuinely thankful for the applause and cheers.

I recommend seeing them live and buying their album. 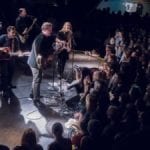