The Last Waltz At 62nd and Amsterdam

This Thanksgiving, when we sit down for our turkey or tofu dinner, those of us who care about such things might take a moment to mark the 40th anniversary of The Band’s farewell concert. It was filmed by Martin Scorsese and released two years later as The Last Waltz, and remains not only a superb documentary, but also one of the seminal events in American roots music.

Earlier this year, Warren Haynes assembled a tribute show in New Orleans during JazzFest, and this past weekend it was New York’s turn, with a different cast of characters. In a collaboration with the folks at Lincoln Center and the Americana Music Association, several thousand souls squeezed into the mostly concrete Damrosch Park to enjoy a free concert with Larry Campbell and the Midnight Ramble Band, featuring special guests Bob Weir, Lucinda Williams, Dr. John, Buddy Miller, Patty Griffin, Howard Johnson, Teddy Thompson, and Anderson East.

I’m sure my editor would prefer that I earn my keep by turning in a proper and concise review, but I just read Scott Bernstein’s post over at JamBase and, to be honest, he pretty much captured the night. I completely agree with his observation that it was an “all-killer, no-filler version of The Last Waltz” and that “no one is better suited to play the music of The Band in 2016 than the Midnight Ramble Band.”

At the beginning of the show, each member of The Band was mentioned, and each received loud applause. The last name spoken was Levon Helm, and the roar of the crowd at the mention of his name was so charged it almost lifted me off my seat. I don’t mean to stir up the pot here, but if there is any question as to who the leader of The Band was, I know a few thousand people who would testify.

A large contingent of the crowd seemed to be there for Bob Weir, but Lucinda and Dr. John were greeted loudly and all three received standing ovations. Maybe I’ve been hanging out at No Depression too long, but I was really surprised at how many people sitting around me had no idea who Buddy Miller, Patty Griffin, or Teddy Thompson were. Perhaps just a reminder that in this great, big world of music, we’re still just a subgenre.

On the morning after, before I even got out of bed, I checked You Tube to see if any videos had been uploaded yet, and discovered Front Row Dave. A professional music videographer in the Hudson Valley, Dave Beesmer has a channel on You Tube with lots of concert videos and he’s closing in on almost four million views. He shot the show along with Joey Calderone, and I appreciate that he’s allowed me to share them with you here. 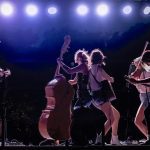 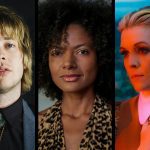