The Exotic Birds of Cascabel 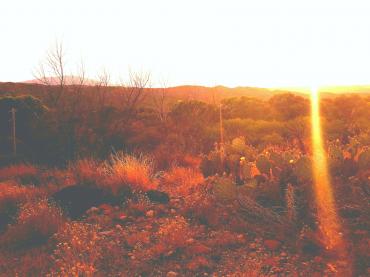 I’ve spent between 200-300 days on the road for the past five years playing in a bluegrass band with my father. In that time I’ve played in a dozen countries, met dear friends, nearly died a half dozen times, and, more than anything else, I’ve seen a lot of places. I’ve seen some really beautiful places, some really ugly places, and some really weird places. These stories are mostly about the weird places. The places that would be hard to find even if you were looking for them but that I got to see seemingly because I happen to play the mandolin.

Cascabel is the kind of place that you would never just end up in, partly because you wouldn’t even know you were there. A ghost town in Cochise County, Arizona, east of Tucson on the San Pedro River, Cascabel consists of a few dozen ranches along a single road with one community center situated near the remains of the post office, which has been closed for 88 years. It’s about 53 miles from the community center to the nearest gas station, and I played a show there.

This gig came about as the result of pulling on threads looking for any sort of gig along our route. It didn’t pay much, but we’d get a free place to stay for a couple nights and some meals while we laid low in between higher-paying weekend gigs. We stayed in Cascabel a few times, almost freezing to death once. During our laying low, we’d hike, talk to people, and eventually learn that while Cascabel had, generously, 200 citizens, it was home to more than double that number of rescued exotic birds, but we’ll circle back to the birds.

We were nearly late to the gig our first time and might have missed it all together if we weren’t haunted by the patron saint of serendipity. After rattling past the community center twice, wondering how much more of the dirt road our rented minivan could take, a truck pulled up next to us. The window rolled down and a man whose name I can’t remember but we’ll say was Randall stuck his straw-hat-covered head out and mumbled through his beard in a barely intelligible but unmistakable West Virginia accent, “What are you folks doin’ out here?” To which we replied, “We’re here to play some bluegrass music.” Randall noticeably perked up and said, “Well shit, what a coincidence, I’m going up to the center to listen to some bluegrass now! What are the chances?”

We followed Randall to an inconspicuous wooden arrow pointing up a steep unpaved “road” and arrived to find a one-and-change room adobe building situated on a hill overlooking the valley. Inside we joined a motley crew for a potluck dinner featuring good Mexican food and multiple large bottles of Kirkland-brand tequila. We ate with and played for ranchers, remote computer coders, homeschooling families, students volunteering to work on farms for the summer, hippies, bird experts, and, of course, Randall, who had greatly enjoyed the Kirkland tequila. The entertainment was appreciated, as there weren’t many other events in town, and the tips we were playing for were generous.

During one of our trips, we learned about Cascabel’s bird sanctuary. Some of the volunteers at the sanctuary had come to the show and offered to show us around if we stopped by. My dad and I seemed to be the only ones interested, so we went over the next morning and saw one of the most out-of-place scenes I have ever seen.

The Oasis Sanctuary is a home for various captive birds for whom rehoming is not an option. Most people who adopt parrots do not realize that they have life spans of between 50 and 90 years, and thus often outlive their owners. These were the lucky birds in the Oasis. Many others had suffered physical and emotional abuse (wing clipping, voice box removal, neglect, etc.) and had been rescued.

My favorite bird, who’s name I’ve also forgotten, was trained to do party tricks for some rich guy in L.A. He had learned to roller skate using these specially designed bird skates. But one day, he accidentally fell into a pile of lead ball bearings and got lead poisoning, severely mentally disabling him. But he still remembered how to skate.

As I stood with my father and watched this parrot with a glazed-over look in his eye skate around the floor of a trailer in the middle of the desert amongst this macabre display of macaws, I got a feeling that I had started to get more and more as I traveled. This was a particularly absurd moment that was only made more unlikely by the fact that vignettes like this had become more and more frequent in my life. For each of the glamorous places I traveled to and played in there were at least a dozen more entirely unremarkable places. But more often than seemed possible I would find myself in these surreal situations where instead of feeling thankful for my opportunities to travel or guilty for wishing I could just go home, I felt confused about the nature of travel in general. Torn between knowing that whether it was people in my favorite cities or people working to care for 400 exotic birds in the middle of the desert, everyone was still just taking their lives and day by day and didn’t seem to appreciate their circumstances. Which made me feel more guilty about usually just wanting to be home, but I was glad I got to see Cascabel.