The Everly Brothers, The Loser Viewpoint in Popular Songwriting, and “Cathy’s Clown.”

I’m a little late to the party on this one, but I wanted to make sure I did it right.

Many of you are aware that Phil Everly of the hugely influential and great Everly Brothers died two days ago. The Everly Brothers brought the fantastic brother-harmonies dynamic of The Delmore and Louvin brothers to the modern sensibilities of the then newly born rock generation. Instead of focusing on the adult-folk element of the Delmore Brothers (although they notably took a huge risk with the “Songs Our Daddy Taught Us” album in 1958 that did just that) or the gospel/country subject matters of the Louvins, they took their lyrical themes from classical pop and rock. They sang of teenage concerns, like in “Wake Up Little Susie” or “When Will I be Loved?” that appealed strongly to the younger market.

Part of their appeal was their ability to elegantly play the loser so frequently in their songs, which is highly relatable to a large percentage of not just the teen market but adults as well. In most of their biggest hits that you could come up with off the top of your head is a song in which the viewpoint is from a person who has experienced a failed relationship of some kind. In “Bye Bye Love” the singer is singing a farewell to a previous lover who left him for another man. Of course, this theme has been used more times than is possible to count, but the lyrics reel us in because they so aptly describe the pain experienced in such a situation. For instance, the lyric

Simple enough of course, but the near-embrace of the loneliness is striking. The lines “Hello, loneliness” and “Hello, emptiness” remind one of the almost matter-of-fact greeting of Willie Nelson’s “Hello Walls.” Such a defeated and accepting tone almost makes the listener assume that the singer has experienced this emotion before. This makes more sense of the last verse

This defeatist tone is common among several emotional, uninformed sects of the population (like teenagers) who don’t understand that not all people are the same. Many times have I seen someone on Facebook claim essentially “I’m a-through with romance, I’m a-through with love.” Cue relatability.

More of their teenage-centered tunes include the very famous “Wake Up Little Susie,” which describes a boyfriend needing to get his girlfriend home on time, or it’s the Dad’s shotgun in his face. There’s also the aptly titled “Poor Jenny” which describes a botched first date in which, among a myriad of unfortunate events, Jenny gets ditched by her would-be boyfriend at a party that the cops are about to raid. Yet again we see the singer as a clumsy love-loser. “When Will I Be Loved” speaks for itself.

Another extremely strong element of the Everly formula is their fantastic production. Specifically I want to point out the masterpiece song “Cathy’s Clown,” written by Phil. Many critics, including Brian Wilson himself, will tell you that Phil Spector’s “Be My Baby” is the greatest pop record of all time; but my two cents says that “Cathy’s Clown” is just as good or better (I’m in the latter camp). The song was produced by Wesley Rose, the son of the immensely revered and famous Fred Rose (of Acuff-Rose). Much like “Be My Baby” or Dylan’s “Like a Rolling Stone,” the song begins with an absolutely killer drum intro by the great Nashville A-Team drummer Buddy Harmon. Assistant engineer on the session, Bill Porter (who did Roy Orbisons’ “Only the Lonely” as well), tried an interesting sonic experiment on “Cathy’s Clown”: “If you listen closely,” he says, “the drums sound like two drummers playing. I had gotten a tape loop from RCA New York that ran 60 ips, and there were four different playback heads which you could switch in and out and then move them around the tape path. So I heard this rhythm pattern and I thought, ‘God, this would be great for this song,’ so I asked Wesley Rose if I could use the tape loop on the drums. He said, ‘I don’t care.’ So I hooked it up, fed it back into the console and got the balance, and then I switched it off on the verse and on during the bridge. I just did it manually with a switch. It’s right in tempo and right in sync, so it gave the effect of two totally different drum sounds. That became the biggest record they ever had.”[1]

Recorded at RCA’s Studio B in Nashville, they recorded their reverb-laden vocals on one microphone, live. Their harmony on the line Don’t want your love anymore” is easily one of the greatest harmonies ever put on record. Their two voices become one thunderous, powerful force that would be imitated by several acts to follow. Most notably: The Beatles (for their most Everly sounding tune check out “Baby’s in Black” from “Beatles For Sale.” Great song) and Simon and Garfunkel. Bob Dylan once said of the Everly Brothers, “We owe those guys everything. They started it all.” The Byrds, The Beach Boys, The Hollies, the Flying Burrito Brothers and The Eagles all acknowledged their debt to the Brothers’ unique sound, and the number of singers and bands influenced by those groups is incalculable.[2]

Not often mentioned are the brothers’ influence on country rock. Really, they were doing country rock long before Gram Parsons. They later released an album called “Roots” the same year “Sweetheart of the Rodeo” was released, which included a rockin’ version of Jimmie Rodger’s “Blue Yodel No.1 (T for Texas)” that featured a fuzz guitar. This was about a year or two before Parsons used one on “The Gilded Palace of Sin” album.

The most important aspect of the Everly’s popularity is the harmonies. There’s really just no way to describe the earth-shattering power of Phil and Don singing together. It seems completely effortless. For those of us who love harmony-laden rock like The Beatles, The Beach Boys, Big Star, or what have you, it’s all because of the Everly’s. The passing of Phil Everly is a tragic blow to rock, country, and pop. In my opinion, just as Brian Wilson’s falsetto voice encapsulates the Beach Boy’s sound, Phil really defined the certain timbre of the Everly’s sound. The Everly Brothers are easily one of my top ten favorite musical acts of all time; I can’t explain how incredible they are to me. The passing of Phil is extremely saddening, especially for his family. I’m glad it seems to have rejuvenated some people’s affection for the Everly’s recordings, and I hope the occasion of his death will open the doors to a new generation of fans discovering the Everly’s music.

So long Phil, now that you’re gone I say what you sang in your awe-inducingly beautiful voice, “Hello, loneliness, [..] Hello emptiness.” 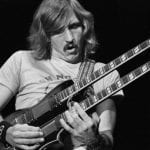 Joe Walsh Slays the Tacoma Dome, Backed by Some Band Called The Eagles