My copy of The Essential Rosanne Cash came in a few days ago.  As expected, it’s a great collection.  If you need a full preview before acquiring it, there are numerous reviews you can consult.  One of the best of those is from Roughstock.  Another excellent review is by Hyperbolium, here on No Depression.  You’re just a Google away from others.   I won’t attempt a full review here, but the condensed version goes like this:  The 2 CD TERC should be a part of your collection – it sports 36 songs spanning a little over 30 years, including 11 #1 singles.  In addition to the hits, there are key songs from the last twenty years or so, including treats like On The Surface, with Rodney Crowell on guest vocals; a live version of A Lover Is Forever; September When It Comes, featuring Johnny Cash; and 500 Miles, with daughter Chelsea Crowell providing a bit of harmony vocals.  To be fair,  just about every song on Disc 2 feels special as the later work is most familiar to me.  What’s most interesting to me, though, is how much I have enjoyed the earlier material on Disc 1 – it contains several songs I missed the first time around that are well worth the listen.  Ms. Cash co-produced the collection (along with Greg Geller), and it has the look and feel of a labor of love.

I’m a liner notes guy, and I was not disappointed by what I found in TERC.  Ms. Cash contributes a very nice introduction and a separate piece acknowledging the contributions of other “musicians, songwriters, producers, engineers and executives,” too.  The main notes are written by Ms. Cash’s ex, Rodney Crowell.  We are also provided with key information on each song – very important for a retrospective collection (though I’d like to see a bit more song info on new releases if it’s not too much trouble, folks).  For example, on Seven Year Ache:

More from the liner notes in a moment, but the info on Seven Year Ache reminded me that this song is probably how I first became aware of Ms. Cash as a singer and songwriter.  (She charted at #17 Country in 1979 with No Memories Hangin’ Round, a duet with Bobby Bare, but in those days I wasn’t listening to much country radio.) Seven Year Ache did well on the Pop charts too, and I have a clear recollection of noticing it (and her).  I recall a different look  (punk style, purple hair), but her beautiful voice and the intriguing lyrics of Seven Year Ache are what I remember most.  Perfect coming out song for Ms. Cash – I couldn’t quite figure out the backstory on the song (or her) but I liked them both just fine.

It is fortunate that we have Ms. Cash’s recent memoir, Composed, as a companion piece to TERC.  The narrative of Ms. Cash’s rich life and the men she has shared it with change the way we hear some of the songs on TERC.  Her father is first on the “list” of Ms. Cash’s men.  In Composed,  we see him as strong and gentle, loving her enough to let her go her own way, but happy to advise when asked.  I grew up a Johnny Cash fan (my grandfather loved his music – one of my earliest music recollections is his song Five Feet High And Rising) so September When It Comes chokes me up anyway, but the portrait Ms. Cash paints of her dad in Composed makes September even harder to hear – in a very good way.

Mr. Crowell and Ms. Cash’s husband John Leventhal are central to the story of Ms. Cash’s career, both in Composed and in TERC.  Disc 1 of TERC contains songs mainly produced by Mr. Crowell (he also wrote or co-wrote 4 of the songs), while the majority of songs on Disc 2 are produced or co-produced, sometimes with Ms. Cash, by Mr. Leventhal (he also co-wrote September and 3 other songs on TERC).  The liner notes identify other men who were key, including Emory Gordy, Jr., Hank DeVito and Larrie Londin, but many others are named.  Still, with all these men, and in a man’s world, it is Ms. Cash’s voice (both as singer and writer of 21 of the songs on TERC) that transcends all and makes her career and this collection so special.  As she wrote in The Real Me, “A woman’s her own mystery, not a shadow of her [men].”

Perhaps Mr. Crowell sums up Ms. Cash best when he tells the story of eavesdropping on her as she wrote a song in 1978 (this would have while recording her first album).  “In that long moment, I began to conceive that this wasn’t some glib, pop starlet intent on wowing us with vocal gymnastics, but a budding poet who would very soon come to understand that the complexities of her compositions needed no other delivery system than the sound of her voice.  Intuitively, I knew it wouldn’t be very long before Rosanne assumed the lead song-writing role in what was destined to become a legendary career.”  Legendary indeed, and more to come. 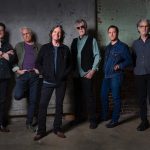