By now the dust has nearly settled on the stunning 2011 Decemberists album, The King Is Dead. A rootsy, Americana turn-around that surprised their indie-lit core fans who were used to longer, more abstract songs, The Decemberists’ new sound dropped at a key time when bluegrass and American roots music has been moving back into the mainstream, and seeing as they hit #1 on the Billboard charts, they were clearly on the right track.

The after-shocks of  The King Is Dead have been felt throughout 2011, mostly thanks to a series of additional recordings and in-studios The Decemberists have been releasing on the heels of their full-length album release in January. It’s good that the Decemberists are putting together new releases, follow-ups and in-studios, since Meloy has publically stated that he’s taking a break from music to focus on writing. His new novel, Wildwood, set in an imaginary forest outside Portland, Oregon, just got optioned by the stop-motion animation studio that created a film of Neil Gaiman’s Coraline, so that should keep him busy for a while. But for now, this ephemera is a great way to keep the music spinning. 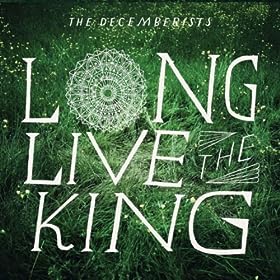 Just released, this is a six-song EP of bonus tracks from The King Is Dead sessions which were recorded on Pendarvis Farms, the auspicious location of the annually awesome Pickathon festival. There’s something magical in the air out there, some kind of happy faerie magic, and it’s here on these six tracks, though maybe not to the same degree as the full-length album. The songs here are drenched in sweet melancholy with just enough obtuse lyrics and pedal steel to keep this from being either indie-pop melancholia or alt-country exercises. They’re catchy too, in a pop kind of way, another mark of The King Is Dead, which saw The Decemberists creating melodic hooks like never before. “Foregone” and “Burying Davy” are the strongest songs, and “Burying Davy” is a joy for anyone looking for a return to Meloy’s sea-shanty days. The only track that falls flat is “I4U&U4Me,” a strange experiment in country drum machine programming that doesn’t really seem to fit the song. These are songs that went to the cutting room floor after all, so they’re not going to be as well crafted as the final cuts. But when you listen to the stripped-back instrumentation of the track “Row Jimmy,” you’re listening to the nuts-and-bolts of the band, the skeleton that’s usually covered over in post-production and later, advanced arrangements. On this track, Meloy and Co. seem to be looking to mimic the rambling, country feel of the Grateful Dead, from whom they got the song. The final track, “Sonnet,” though based on the poetry of Dante Alighieri, has a kind of laid-back calypso feel, complete with salty sea trumpets.

This is a document of a great band stretching out in new directions, and trying out new ideas, and while it can’t match the focused intensity of their full-length album, it’s certainly interesting to explore some new sides to The Decemberists.

This EP of live recordings made exclusively for iTunes is nice not for the retread of tracks from The King Is Dead, but for the rare covers. Leonard Cohen’s “Hey, That’s No Way to Say Goodbye” gets a gentle, countrified transformation, with less of an emphasis on lead singer Colin Meloy’s signature vocals and more of an emphasis on Cohen’s fine, understated songwriting. The second cover is from fellow indie-folkers The Fruit Bats, “When You Love Somebody.” It’s a beautiful, catchy song that will make you want to look up more tracks from The Fruit Bats if you’re not familiar with them already. The Decemberists play it pretty straight-up, adding some barndancey fiddling and sweet harmonies. The song is so strong there’s not much need to gussy it up, which they clearly realized.

The other tracks are taken pretty much note for note from The King Is Dead, which is a bit disappointing unless you’re a Decemberists completist, or are looking for a quick intro to the album. They do turn in a nice version of “The Shankill Butchers,” a great evil-lullaby, and a redo on a song from their very early catalogue with “Shiny.” Like many things on iTunes, this EP is great for cherry-picking a few key tracks. The Decemberists
KEXP Live Session from the Gorge
[Listen here]

KEXP’s known for beautifully filmed and recorded in-studio sessions, but this is actually a live recording of The Decemberists from the 2011 Sasquatch music festival, an annual indie rock fest that’s held in front of a breathtaking view of the Columbia River Gorge. Being so closely tied to the natural environment of Portland, Oregon, right next to the Gorge, you’d think this would be a homecoming set of sorts, and it clearly is. The audience is ecstatic, cheering and shouting throughout, and the band seems relaxed. It’s a real live recording, unlike a live studio recording, so the sound isn’t great all the time. But the band performs perfectly and it’s hard not to be swept along by the fun of the moment. They cover a host of songs from throughout the catalogue, settling on clear fan favorites like “The Infanta,” “The Crane Wife 3,” and “The Mariner’s Revenge Song,” and include the best tracks from The King Is Dead, notably “Down by the River,” which was conspicuously absent from the iTunes session. There are some quite funny moments too, including an impromptu “Jazz-Quatch” session of soulful jazz, scatting, and funky basslines inspired by some kind of technical malfunction that caused the band to need to stall for a while. It’s actually pretty awesome! This set is just a helluva lot of fun, a document of a band surrounded by friends and fans, celebrating their vast catalogue and rocking out.

The Decemberists
The King is Dead Deluxe Box Edition

This box edition of The King Is Dead came with a whole book of photos, a limited edition print from illustrator Carson Ellis, and what might be a really interesting short documentary on the making of the album (plus the CD/Vinyl).

But what do we look like, Rockefeller? This set sells for $165! If you’ve got the set at home, drop us a line to let us know what that documentary is like.

NOTE: This review first appeared in Driftwood Magazine. This online publication took over from the venerable Dirty Linen magazine and publishes near-daily reviews of music releases in any number of genres.

Closing Out Our 20th Year with Mags, Shirts, and More