It was early 2012, as best I can recall. This happened down at the River Club on Railroad Street in Joliet, Illinois, on the west bank of the DesPlaines River in the shadow of the Interstate 80 bridge. They have a blues jam down there on Wednesday nights. Twist is a regular, and a lot of other players like T-Bird Huck, Michael Brown, Tom and those cats hang out and play.

This was just a few months after I had left the Big Eddy Springs Blues Band after 11 years as bassist. I was still figuring out just what I’d be doing next musically. I was starting to explore the guitar more, though on this particular night I happened to be playing bass–the instrument I was comfortable with. I was not prepared for what was about to happen. 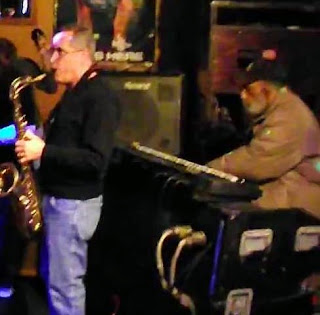 At a blues open mic, the person running it calls up various musicians who may or may not know each other. Sometimes you play with people you’ve never met. I knew of Twist and had met him before, but I think this was the first time we played together.

I was playing my Gibson Grabber electric bass, and Twist was playing an electric guitar–Fender I think, but I’m not sure. There was a drummer, a second guitarist and a keyboardist.

We were playing a shuffly kind of instrumental boogie. I was standing in the center in front of the drums. Twist was to my left. We’d gone around a couple times on the 12-bar progression. The other guitarist and keyboardist had taken solos. It was Twist’s turn to solo but instead of playing he stopped, turned and gave me an exasperated look.

He motioned with his face, hands and body. I was like, “What?” He was like, “It’s rhythm and blues.” I didn’t understand. Whatever he was trying to tell me, I wasn’t getting. Finally he just shook his head and said something like, “You don’t know your scales.

Now, Twist is kind of an ornery fellow. I could have reacted any one of a number of different ways. I could have gotten all indignant, and been like, “You’re just a jerk,” only using language a lot less PG. But instead it struck me: He was right. I didn’t know my scales. 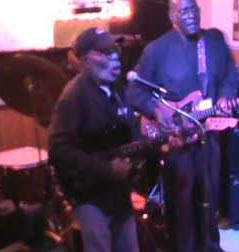 Nobody had ever called me out before, but the truth is I had been faking it for nearly 30 years. That is to say, I played by ear. I didn’t know a lick of music theory, and I had never taken the time to ask anyone to show me the basics. I had never learned or practiced guitar scales. As a bassist, I could blend into the mix, show energy or restraint depending on the moment and pass as an integral part of the act. I never had to solo, but on the rare occasions when I did I could pull off something passable.

Twist showed me the light, and for that I’m eternally grateful. A few months later I saw him at the Uptown Tap in Westmont at a jam hosted by Mark Cihlar. I tried to buy him a beer but he said he didn’t drink anymore. He accepted my offer to purchase a lemonade for him, and I might have bought a drink for his friend.

You see, unless you’ve experienced the sheer joy of creating beautiful music, you’ll have no appreciation for the insight Twist imparted upon me. Music can be like a labyrinth. You think you have a competent understanding of the art form then one day you stumble upon someone like Jon Gomm who just totally shatters your comprehension of the sounds an instrument is capable of making. It’s like the movie “The Matrix.”

So thanks, Twist, for helping me realize how little I knew. Because I’ve learned much since then and I’m determined to learn as much more as I can in the time I have.