The Blasters brought “American Music” back to St. Louis on Sunday night, and like the song says, “it was a howl from the desert (and) a scream from the slums,” with “the Mississippi rollin’ to the beat of the drums” just a few blocks away from the Off Broadway music club.

Phil Alvin’s stoked rhythm & rockabilly band from Downey, Calif., doesn’t make it to the Midwest very often, so it’s always a treat to see them. Unfortunately, Sunday was also Mother’s Day, and the crowd numbered only about 50. But they were largely hard-core fans, and they had their dancing shoes on.

Three-quarters of the original band that came out of the L.A. punk scene in the early ’80s are still on the road: Alvin on vocals, guitar and harmonica; John Bazz on bass; and Bill Bateman on drums. Alvin’s kid brother, guitarist Dave Alvin, who wrote most of the band’s early records, left in 1986 to forge an iconic solo career, and the Blasters disbanded. Phil revived the band in the late ’80s and, since then, a number of lead guitarists have rounded out the lineup. That role has been filled for a few years now by the great Keith Wyatt playing a gold-top Gibson.

This is stripped down rock ‘n’ roll, the same as it’s been for more than three decades: no pyro, no light show, just four guys playing from the gut and the heart.

“American Music” kicked off the set, which spanned the band’s history with and without Brother Dave. It included “Well Oh Well” and Eddie Curtis’ “Rock My Blues Away” from the Blasters’ 2012 release Fun on Saturday Night, and a cover of Johnny Paycheck’s “Precious Memories” (“The Only Hell My Mama Ever Raised”) from 4-11-44 in 2004.

Phil Alvin dedicated “Help You Dream”–a song Dave wrote– to Dave, and name-checked tenor sax legend Lee Allen, who was a mentor to the Alvins and later joined the Blasters for a number of years. Allen died in 1994.

As the set tore on, Wyatt warmed up and earned ovation after ovation for his solos on “Red Rose,” “Marie Marie” and the show closer, Otis Blackwell’s classic “Daddy Rolling Stone.”

Phil Alvin faced some serious health issues in 2012, and with help from friends and fans has come through it all. His scowling, grimacing stage persona and distinctive, genre-spanning voice, one of the best in rock, are stronger than ever.

He remains, as he sings on the Lieber and Stoller song, “One Bad Stud.”

This post was created for my blog, The Roots Cellar 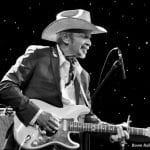