My second gig of the year, and again is at the Old Cinema Launderette. I do go to other places, but when the offerings are this good, you have to take advantage!

Harri Endersby opened the show, a local singer-songwriter, I was seeing for the first time.  I enjoyed her original songs and 1 cover, especially a song called ‘Tobacco Tin’ that was genuinely affecting. Harri’s voice managed to be both vulnerable and fierce, and she showed a good range. Her clear, open delivery suited her songs perfectly.

Accompanied by herself and another guitarist (whose name I didn’t catch…sorry), Harri’s finger-picking was clear and precise, and the lead parts were fantastic. They were varied and interesting and always added something to the songs. I would be interested to see them play again and there was talk of an EP around Easter so I’ll keep an eye out for that.

I’ll be honest and say I was not too familiar with The Black Feathers before coming to the show. I liked a song I heard on their website and bought my ticket on the strength of that one song alone…this was a good move. Ray Hughes and Sian Chandler performed with a closeness and intimacy that was incredibly well-suited to the intimacy of the venue and to the personal nature of their songs.

Firstly, the songs are a great mixture of folk and Americana, and had blues elements that I wasn’t expecting. There was a good variety of pacing and styles. Ray’s guitar playing served the needs of the songs perfectly, never showing off or doing anything unnecessary or complicated.

Secondly, the voices. Individually, both of them showed fantastic ranges and their delivery suited the different styles and melodies. They both took the lead at different times, did some great call-and-response parts and weaved vocal lines together into, frankly, stunning harmonies that were so good it reminded me of seeing Gillian Welch and David Rawlings sing with one another.

It is obvious they have worked on their songs and how they sound. I bought their EP ‘Strangers We Meet’ and have listened to it 5 or 6 times and all 5 songs are excellent. The EP has other instruments that do give the songs a different feel, but it is the writing and their voices that stand out.

I had a chat after the show with them both. They were friendly and they talked about playing live in different places and travelling. You can tell by talking to them, listening to their music or watching them play live that they love playing and singing together and for others.

I will be seeing them play again in a couple of days when they support The Stray Birds and I am looking forward to it. 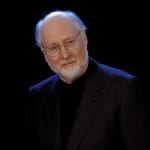 The Maestro Of Movies – John Williams Live At The Hollywood Bowl 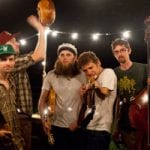 What Happens When a Band Learns its Name was an Obscure Racial Epithet? Meet Parsonsfield.